Blogs > There's No There There > The Blind Leading the Blind: Everyone’s Middle Eastern Madness


by There's No There There tags: Middle East 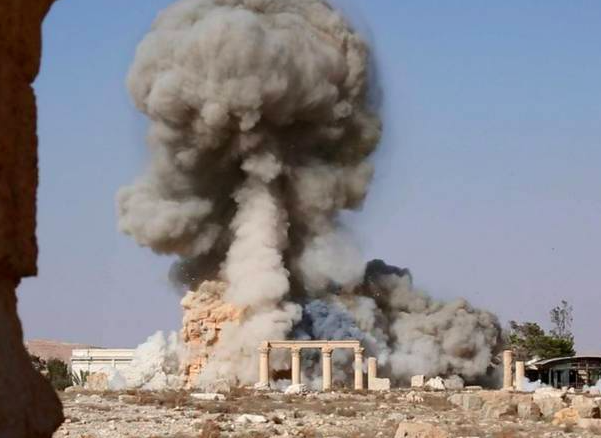 ISIS takes credit for blowing up this temple in Palmyra

“There is a holy mistaken zeal in politics as well as in religion. By persuading others, we convince ourselves,” or so said the forgotten English writer Junius in the mid-18th century. When I read his words the other day I was reminded of other situations where ideology and ignorance of history replaced reason.

Operation Unthinkable  is one of many such  examples, a loonie scheme hatched in early 1945 by Winston Churchill, who was exhausted by six years of war, drinking heavily, with a loathing for his Soviet nemesis – though he once told Field Marshal Montgomery he and Stalin could resolve all their problems if only they met weekly over dinner fortified with an ample supply of scotch and vodka.

Churchill wanted to forgive the Nazis and instead have 100,000 of their Wehrmacht troops link up with the British and Americans to attack the victorious Red Army as it sped toward Berlin and therefore “impose the will of the Western Allies on the Soviets.” The plan was clearly insane and unenforceable yet Churchill ordered the British Armed Forces Joint Planning Staff to develop his idea until rational members of his inner circle said no.

I thought of Churchill’s obsession after reading that Cato, the libertarian think tank, recalled John Judis describing in the New Republic “what it was like to oppose the [Iraq] war in 2003,” to which Cato writer Gene Healey added, “It was pretty damn lonely.”

During the run-up to the war, with the chicken hawks leading the charge, there was near unanimity among our think tank policy elites that the war was a just war – that is, all but Jessica Matthews at the Carnegie Endowment for International Peace and Cato’s chair, the late Bill Niskkanen, both of whom dared to object.

Now, as we enter another year of the endless Afghan war (Brian McFadden, the Times’s smart political cartoonist, sent a greeting: “Happy Anniversary! Afghanistan. 14 years and you’re more intractable than ever”) not much has changed except that a few more American VIPS now dare question American Exceptionalism and the fantasy of regime change. After all, it was US involvement in Afghanistan and its invasion of Iraq which helped produce the chaos, mass deaths, ISIS, and indirectly that 3-year-old Kurdish boy, the child of desperate refugees, lying dead on a Greek beach.  We could do much worse than read Gareth Porter, one of our more acute and thus ignored specialists on the Middle Eastern disaster, whose online Truthdig article, “Why the US Owns the Rise of Islamic State and the Syrian Disaster” is worth a hundred columns by our punditocracy. The late great NY Times writer David Carr understood better than his paper’s Op Ed-ers that, “while America was done with Iraq” “Iraq was not done with America, not by a long shot.” Had he lived he could just as well have said “Middle East.”

(My conscript father served as a combat soldier in Imperial Russia’s terrible WWI army and after the Bolshevik Revolution was dragooned into White General Kornilov’s pro-Tsarist, anti-Red force, where he told me, he witnessed horrendous brutality on all sides, a familiar Middle Eastern sight today).

Now hard-line Putin, no liberator he, has entered the game. What’s he up to, “experts” around the world keep asking? No doubt Putin and his own resident hawks, with no apparent domestic dissent (so far) are pushing him to keep in mind Russia’s historic Middle Eastern role while reminding him as well of the need to save Assad and the Alawite and Christian minorities and by doing so, demonstrate with force of arms that his Russia is no longer a Yeltsin-Gorbachev pushover. But Russia’s entry also demonstrates that there are no good guys and bad guys in this dangerous game of Russian Roulette. Putin has challenged the US, which since the end of WWII, has believed – with virtually no dissent at home – that the Middle East is its exclusive playing field.

In the region’s complex and intricate tangle of religious and political rivalries, Shiite Iraq, Iran, Assad’s Syria, Hezbollah and Russia, now welcomed by Egypt’s authoritarians because of its contempt for the Muslim Brotherhood in its midst, have formed a de facto alliance opposed to the US, and its “coalition,” including Turkey, a member of NATO but mainly concerned with keeping the Kurds in check along with Sunni Persian Gulf States and Saudi Arabia, both of whom are ready to fight until the last American soldier.  If necessary, even repentant remnants of Al Qaeda and its Nusra Front, once considered by the US to be terrorists, might be recruited if things get really dicey.

Meanwhile, America’s hawks, safe and secure at home, are fuming, assuring themselves that “We Are (Still) Number One.” They’d love to send the troops in again (but never their own kids) but are afraid of a quagmire or defeat, and, naturally, political retribution at home. Their latest chestnut is calling for a “no-fly” zone, never explaining how it would deter Russian aircraft. So everyone holds fast to the unworkable “Assad must go,” policy before  considering any possibility of a  US-Russian compromise to jointly fight ISIS and only after worrying about persuading Assad to retire to a beautiful Swiss resort.

At least the hard-pressed Obama has (so far) rejected the idiocy emanating from his hawkish critics. “Half-baked ideas as if they are solutions or trying to downplay the challenges involved in the situation,” he said. “What I’d like to see people ask, specifically, precisely, what exactly would you do and how long would you fund it and how would you sustain  it? And typically, what you get is a bunch of mumbo-jumbo.”

We need to look elsewhere for different views. David Shipler, who once covered Israel for the Times and managed to come away clear-headed now writes his insightful online Shipler Report. He points out there have been important understandings between 0bama and Putin (possible precedents?), most notably saving Obama from his “red line” blunder about bombing Damascus for its alleged use of chemicals as weapons (still unproven) and both supporting the  5+1 Iran Agreement.

Then there’s Charles Glass, former ABC News Chief Middle East Correspondent who wrote Syria Burning: ISIS the Death of the Arab Spring. Glass, whose maternal grandmother was born in a locale now part of Syria, wrote in the New York Review of Books that, heading into the sixth year of the Syrian civil war, “Neither side has the power to defeat the other.”

Recently returned from Damascus, he worries about the “savagery from all sides in what has become an apocalyptic struggle for dominance and survival,” where the US has “encouraged the opposition [to Assad] from the very beginning,” thus helping to trigger the civil war, which has become a “free-for-all in which everyone pursues his own interests to the detriment of the Syrians themselves,” who are suffering “unimaginable torment.” And more: “The regime’s security services practice torture on an industrial scale. Both sides besiege villages and both sides commit massacres” and Glass asks, no, pleads, that the civil war be stopped.”What are they waiting for?”

It’s an optimistic dream. War trumps peace in today’s Middle East. There are mountains of money to be made and shipped to secret bank accounts, ancient religious feuds to be settled with mass murders, Great Power muscles to be flexed, and political reputations to be burnished. There is no easy way out, let alone caring about the fate of the shattered and demoralized Syrian people. Far easier to imagine that in the bowels of the Pentagon nuclear plans are being drawn, when and if ordered. No doubt the Russians are doing the same.

Dmitry Kiselyov, director of the TV network Russia Segodnya, pulled no punches. “Russia is the only country in the world that is realistically capable of turning the US into radioactive ash.” Yes, Dmitry, my friend, but two crazies can play the same game.

Sarajevo anyone, but this time with nukes?