Blogs > There's No There There > Quicksand: Or How and Why the U.S. Created its Very Own Middle Eastern Quagmire

Quicksand: Or How and Why the U.S. Created its Very Own Middle Eastern Quagmire 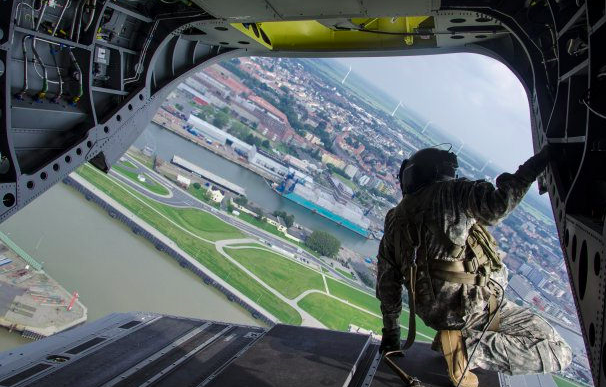 When I read that Dick Cheney was memorialized in marble in the U.S. Capital’s Emancipation Hall and that George W. Bush has been earning big bucks for making speeches since he left the White House, I thought of Gore Vidal’s incomparable description of our nation as “The U.S. of Amnesia.”

And then following the Paris and San Bernardino killings a NY Times/CBS Poll of 431 Republican primary voters and 384 Democratic primary voters reported that Americans are suffering from “a deep anxiety” and “gnawing sense of dread” A few days later the newspaper added “an existential fear of foreign infiltration, unfamiliar minorities and terrorist attacks.”

So it’s now official gospel: Americans are scared and whenever the next terrorist act occurs, temperatures will soar, and as our past bears out, bad things will surely happen as ambitious  politicians, goaded by the mass media, rush to avenge the criminals, guilty or not. Meanwhile, the morally and politically myopic men and women who  entrapped us in a no-win Greater Middle Eastern hornet’s nest will continue advising our leaders how to beat ISIS and finally win our never-ending wars.

But how, precisely, to accomplish that remains a tricky and elusive problem. Since we have no significant allied Arab or Western ground forces on the scene, what to do? Dispatch once more hundreds of thousands of our troops back to the cradle of civilization and then, victorious, hang around for a few more decades as unwanted occupiers? Or maybe just carpet bomb everything and everyone?

Before they took the plunge into Afghanistan and Iraq, the American political-imperial class, comprised of both parties’ hawks, can-do think tankers and neocons spoiling for a war fought with your kids, not theirs, neither knew nor cared about injecting the U.S. military into remote and enduring religious conflicts between Sunni and Shia, which by now have helped wreck Afghanistan, Iraq, Syria, Pakistan and Yemen.

Those still dreaming of America as the region’s master are imperial descendants of the whiz kids who dragged us into the Middle East in 1953 (the democratically elected Iranian president Mohammed Mossadegh ousted by the CIA and the British) and again in 1990 (the Persian Gulf War) and 2003 (Saddam and his WMDs). As the wars continue with no solutions even remotely in sight, wouldn’t it be nice if some smart elites recognized, as they finally did in Vietnam, that it was their political class who took us into war and then decided to call a halt to the bloodshed?.

But that won’t happen, at least not yet. Now, with the entirely unexpected emergence of ISIS, more war is the name of the game. It’s being fought with an imaginary coalition of Arab nations against ISIS, but in reality it’s basically American guns, Special Forces and bombers plus a handful of French and British aircraft and a German frigate. With the West recklessly tiptoeing into a new Cold War, Russian efforts in Syria are dismissed, because we are advised by Washington and the mass media to hate Putin, no angel he, but whose decision to bomb is less to save Assad than to keep its restive Caucasus Muslims in line and above all remind the U.S. and its NATO agents that they won’t be intimidated by efforts to encircle them in Europe and that they too have lots of nukes.

The real problem, then, is that the U.S. has no feasible strategy or goal other than killing as many ISIS members as possible. If that doesn’t work, then there is no Plan B because most of the six Arab coalition members are fighting or suspiciously eyeing one another. Some even send money and weapons to ISIS. And no Arab state is willing to jeopardize its vital interests by sending ground forces to fight on America’s behalf. Assad’s army is battling ISIS and Syrian “moderates” alike and while he’s no bargain, there aren’t many Arab leaders either who can make Amnesty International’s A-list.

It’s time to abandon our disastrous obsession that we can do anything we wish to anyone we wish and get away with it. Maybe against Grenada and Panama but against who else these days? For the time being, though, there is simply no easy way out of the Greater Middle Eastern mess we alone created.