Blogs > There's No There There > SHOW BIZ, or Thoughts About Our Two Conventions

SHOW BIZ, or Thoughts About Our Two Conventions 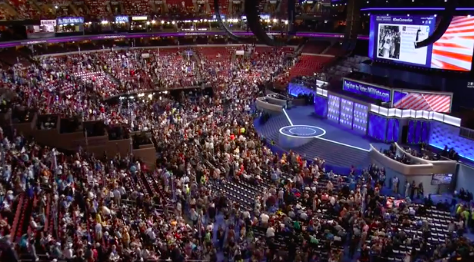 "Why in a nutshell, was our reporting different from so much other reporting? 0ne important reason was that we sought out the dissidents and we listened to them, instead of serving as stenographers to high-ranking officials and Iraqi exiles." -- John Walcott, McClatchy's Washington bureau chief, the first recipient of the Nieman Foundation's I.F.Stone Award in 2008 for his critical reporting during the run-up to the Iraq War.

Watching the two lavishly-produced and enthusiastic spectacles in Cleveland and Philadelphia from afar and listening to two weeks of scripted hot air, I wondered why so much money and energy was spent on an election where less than 50-55% will even bother voting and those who do, have already made up their minds about which candidate they love least.

TV coverage and all the commentators offered little fresh about the odious and vacuous Republican gala and its appalling nominee save perhaps PBS News Reports and its reporter Lisa Desjardins in Cleveland. She's informed and knows her way around politics and politicians, as does Amy Walters at PBS's desk who also tends to look more at long run implications than most. Across from Walters sat the eminent conservative pundit David Brooks, who once flatly stated that Donald stood no chance of winning the Republican nomination. And then there were all those Fox people, skeptics in Philadelphia, but somewhat subdued cheerleaders in Cleveland now that Roger Ailes was gone.

And then, without warning, came Wikileaks' release of secret files revealing Democratic Party dirty tricks against Sanders. No one has yet discovered or tried to discover who among the party's VIPs gave this scheme the green light.  Certainly it wasn't only Debbie Wasserman Schultz, Hillary's sycophant.

Anyway, the media was shocked, shocked, I say, while Democratic strategists quickly changed the subject and the compliant media happily complied. Who else, most agreed, but Vladimir Putin could have committed such a dastardly trick? Putin, of course, is our latest Public Enemy # 1 since America must always have an adversary to keep the war machine running smoothly. Shocked, I repeat, much like Claude Rains in "Casablanca." Imagine one nation playing dirty tricks on another, as if the Cold War and American interventions in Europe, Asia, the Middle East, the Caribbean and Latin America never occurred.

As is so often the case skepticism was taboo (anyone still remember Iraq?) After the NY Times reported on its front page that anonymous intelligence agencies had "high confidence" that Moscow was behind the theft, its follow-up paragraph (does anyone still read past the lead?) reported that similarly unnamed "intelligence officials cautioned that they are uncertain  whether the electronic break-in at the [Democratic] committees' computer systems was intended as fairly routine cyber espionage -- of the kind the U.S. also conducts around the world -- or as part of an effort to manipulate-the 2016 presidential election."

Better to forget that the purloined files not only tried to submarine Bernie but also revealed the Party's intimate ties to the 1% and that every favor is geared to them rather than working America, to whom the Party always professes allegiance. And while we can be sure that Donald will repeatedly harp on it until November, Hillary and her entourage are no doubt counting on our detestation of Donald as well as our collective amnesia to allow it to pass painlessly.

But for Bernie's fans, foreign policy and our 13-year war was barely mentioned. Some of the featured speakers, including the President, chose to take the politically smart path of spreading around hope and optimism, a la Ronald Reagan. Ukraine, Israel-Palestine, Saudi Arabia, the South China Sea, Russia, Syria, nukes, were all too risky to bring up. Much safer to grovel before the military, which, by the way, hasn't won a major war since 1945, when the Red Army offered some help. Easier to extol Democratic Hillary, the liberal hawk and Trump, the troglodyte.

And of course, speakers in Philadelphia went out of their way to exalt America the Global Cop, appealing to the USA/USA crowd and even our neocons.  Martin O'Malley, an ex-Governor who lost to Hillary in the primary, told the audience Hillary "will stand up to ISIS. She will stand up to the Russians." Leon Panetta, an -ex-CIA director  and Secretary of Defense, went after Trump, who sounds dumber with every Twitter message. He also tried to  ignore Bernie's Oregon delegates holding signs "End the drone wars," while  shouting "No more war," forcing Panetta to pause while someone ordered the lights in the Oregon seating area be shut down. So much for the right to dissent.

Panetta went on to tell us that Hillary "is smart. She is principled. She is tough, and she is ready." For exactly what he didn't explain. But rest easy. Russia (and maybe China) are now our official foes and she is, we've been reminded, "tough."

Still, most compelling of all was the Times's  conservative columnist, Ross Douthat, who, after listening to Trump's bizarre acceptance speech, wrote that "the greatest danger of a Trump presidency might not be his transparently authoritarian tendencies, but rather the global chaos that a  winging-it Great Man in the Oval Office could unleash."

But he also added his central argument, the most perceptive I heard these past two weeks, namely that the sentiments Trump expressed were "rooted in the broken promises of both left and right, in 15 years of economic disappointment and military quagmire, in the percolating threat of globalized jihad, in an ever-more balkanized culture governed by an ever-more insulated elite."

And once this weird election is over, and whoever wins, "Trumpism," concluded Douthat, "will come around again."

Maybe so, maybe not. But sadly, liberal hawks and authoritarian troglodytes have few answers, like many of their predecessors in the White House.