Blogs > Gil Troy > 2016 In Context: Understanding "Clintipathy" ... A Pathological Hatred of the Clintons

2016 In Context: Understanding "Clintipathy" ... A Pathological Hatred of the Clintons

Gil Troy is the author of The Age of Clinton: America in the 1990s, just published by Thomas Dunne Books of St. Martin's Press. His next book will update Arthur Hertzberg's The Zionist Idea. He is Professor of History at McGill University. Follow on Twitter @GilTroy 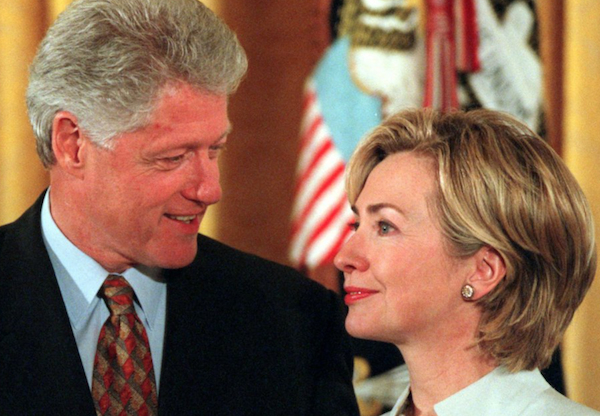 Click HERE for more installments of 2016 In Context:  Gil Troy's commentary on the closing days of the election.

Three weeks from today, Americans finally will have a chance to vote for president of the United States -- hundreds of other offices on ballots across the country. As a presidential historian who has written histories of presidential campaigning, of various presidents, of First Ladies, including Hillary Clinton when she was in that symbolic role, and, most recently, of the Clintons and the 1990s in The Age of Clinton: America in the 1990s, every day until Election Day I will post an article putting this election in historical context, trying to explain this wild and wacky race using history as our guide. So here it goes, with hashtag #2016incontext

Since the 1990s, Bill and Hillary Clinton have faced what we can call “Clintipathy“—a pathological hatred for them rooted in their roles as symbols of the Hippie Sixties and Yuppie Eighties. Hillary Clinton has benefited from many of the changes she and her peers initiated in making America more open, more egalitarian, more critical, more liberal. But as such a lightning rod, she’s made herself and her fellow cultural revolutionaries polarizing figures.

Old-fashioned sexism compounds this culture clash. Despite all her achievements, Hillary Clinton still faces many of the double standards imposed on women. Donald Trump—and Bill Clinton—often get away with half-truths and outright embellishments, enjoying a kind of hall pass reserved for roguish but charming football team captains. Meanwhile, many hold Mrs. Clinton to higher standards, treating her unfairly as the schoolmarmish, substitute teacher.

At the same time, if paranoids can have enemies, just because the Clintons have antagonists doesn’t mean they’re innocent. Hillary Clinton is responsible for the email mess and other ethical tangles, too. Given the hostility, she should have avoided even appearances of impropriety. But, it seems the very scrutiny she wanted to avoid led her into this moral chasm with her private server. Hillary Clinton seems to have been so traumatized by all the revelations in the 1990s, from publicizing the Clintons’ finances to exposing so many sexual intimacies during the Monica Lewinsky and Paula Jones scandals, that when she became Secretary of State she sought to preserve her “zone of privacy.” Tragically, Secretary Clinton’s very desire not to have Judicial Watch and other opponents peer into every interaction caused the shoddy behavior that has us all poring over exponentially more of her exchanges.

Beyond this self-destructive paranoia, the Clintons have cut corners elsewhere, conveying a sense of entitlement, then lying about it. When caught, they have often justified their lapses with a characteristically Boomer self-righteousness, demanding absolution by invoking their idealism. Alice Roosevelt Longworth said President Warren Harding wasn’t a bad man, just a slob; the Clintons have been slobs, too. The march of mini-scandals in the White House was exhausting: the Whitewater financial shenanigans; the cover up after the Travel Office firings; the documents flying out of Vince Foster’s office following his suicide; the mysteriously reappearing Rose Law Firm billing records; the crass push for cash in 1996 which elicited shady Chinese and Indonesian donations; the lies about Bill Clinton’s sexual affairs; and the final outrages of too many unseemly presidential pardons and too much furniture shipped from the White House to their two new homes. Each scandal was not as terrible as opponents tried to make it but not as benign as the Clintons claimed.

Remember those moral missteps. Throw in the undeniable—and you can’t deny it, even if you want to—sexism. Now take the email fiasco. Add zealous enemies functioning in our time of an hysterical, polarizing blogosphere and deeply partisan divisions. Suddenly—voila!—this combustible environment perceives minor ethical twitches like major crimes.

If politicians could undergo soul scans, the evidence would probably show that Bill Clinton and Donald Trump lie more frequently and convincingly than Hillary Clinton. As a Methodist good girl who is neither a natural politician nor a bluffing businessman she doesn’t lie well. Despite Trump’s calling her “the most corrupt candidate ever,” her transgressions don’t rank with the bribery and sweetheart-deal-making that was common in 19th-century political parties—or on New York construction sites in the Seventies and Eighties. Democrats who deem her blameless and Republicans who brand her a master criminal both exaggerate. Such absolutes confuse voters, who must judge her lapses in context, proportionally, deciding how relevant such past behaviors are in determining what kind of president she—or her opponent—will be.