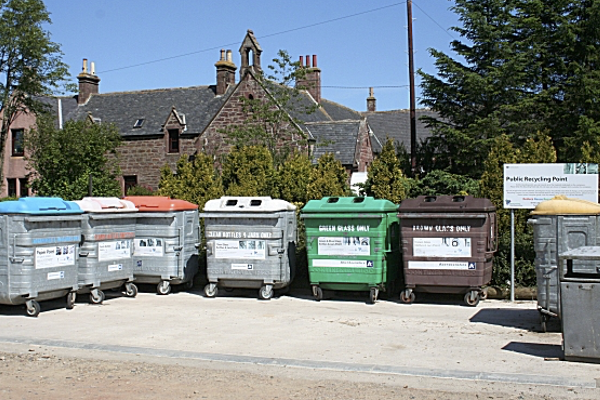 I am a serious recycler. I find ways to recycle as many of the products I use as I can. Every day I run into some roadblock, which makes my effort more difficult. Those problems are a small part of how modern human society is committing unintended suicide.

Recycling is good. It keeps millions of tons of waste out of landfills. It costs less than half the energy to turn recycled materials into finished products than when raw materials are used, and that includes the energy needed to collect them.

Jacksonville, like many American communities, has arranged for curbside recycling of paper, plastics, and metal. Some grocery stores collect plastic bags for recycling. I can take electronics to a store in town and big pieces of iron or aluminum to a metal recycler.

But questions come up constantly. What do I do with the plastic tops of yogurt containers which have no number? Can the trash company handle little pieces of paper scattered among the other things in their single-stream system? How clean should recycled food packaging be? How about aluminum foil?

My belief that we must do our part to properly deal with the piles of waste we consumers don’t consume is not shared by most institutions. Go into a big box, a restaurant, a little shop – no containers for recycling. At sporting events or in parks or almost any public space, no recycling containers. My grocery store does not stock paper products with recycled content, and you have to ask for paper bags instead of plastic. Most stores offer no alternatives to plastic bags. My own college has scattered containers, but otherwise makes little effort to encourage recycling.

A much bigger question is whether the whole process makes sense. China has been helping the world get rid of its waste, by importing it and producing new goods. For example, over the past 30 years, China has taken in nearly half of the entire world’s plastic waste. In July 2017, the Chinese government notified Western governments that it would stop taking in waste from the production of steel, plastic waste, wool, cotton and other fiber waste, ash contaminated with metals, and paper. In many communities, the collection of recyclables is just buried with the rest of the trash, because nobody wants to process it.

But even if recycling were much more widespread and efficient, it’s not enough to stop global warming. The few well-publicized initiatives to reduce the use of plastic straws, for example, are much too little, much too late. Reducing and reusing the waste stream must be part of a broader societal effort to head off the environmental catastrophe toward which we are headed.

Every year we generate more consumer waste. From 88 million tons in 1960 to 150 million in 1980 to 260 million tons in 2015, and there’s no end in sight. The rate of increase has slowed down since 1990, because the amount of waste produced per person every year has leveled off since then. What drives the total waste up is growing population. Because of the gradual growth of recycling, the amount of waste going to landfills has stayed the same since 1980. Some waste is burned for energy, but that amount has stagnated for 30 years. We’re not doing better and we’re not doing worse. But the status quo leads to disaster.

Our landfills are filling up. At this rate, the northeastern US will run out of landfill capacity in 10 years, the Midwest in 13 years. There will be considerable capacity left out West, but that still might fill up by 2043, soon after my grandchildren graduate from college.

We need good plans for a different kind of consumer society. As individuals, we can reduce our use of things we will soon throw away, compost our food waste, recycle everything possible. But we need to do more. American corporations and local governments have to do much more. Colleges and universities should be leaders in practicing, teaching, and promoting sound environmental practice.

That all costs money and time. It’s much easier to throw that plastic bottle in the trash, to take the plastic straw with your drink, not to bother checking labels for recycled content. It’s easiest not to make those changes in our comfortable lifestyles, when the danger seems to lie in the future. Instead of spending small amounts of resources now, we will be forced to spend enormous sums later.

We have had plenty of warning for years that we are changing our planet in ways that are bad for it and for us. There is still time to make the necessary changes. But not much.