Blogs > Steve Hochstadt > So Much Winning 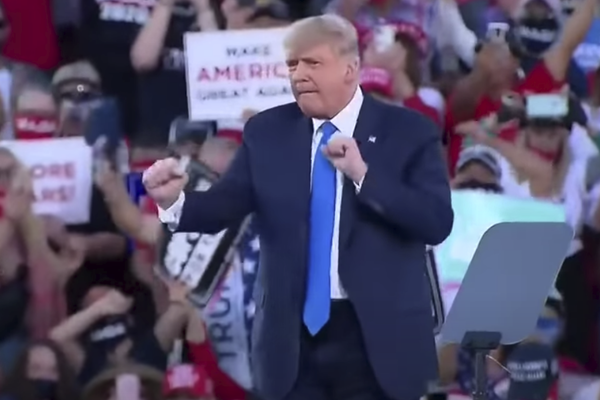 Winning was one of Donald Trump’s most frequent themes long before he became a candidate in 2015. Every issue was placed into a frame of winning versus losing, with himself as the ultimate winner. What kind of person adopts that as public creed, outside of competitive athletes and chess players, who actually play games with a winner and loser? That was an unheeded warning already in 2016.

During his presidential campaign, Mr. Trump promised that under his leadership Americans would “get bored with winning.” His fans would grow “so sick and tired of winning, you’re going to come to me and go, ‘Please, please, we can’t win anymore.’ I’m going to say, ‘I’m sorry but we’re going to keep winning, winning, winning.’” In an op-ed for “USA Today” in April 2018, he wrote about the economy, “And most important, the American people are winning.” The next month, he told graduates of the Naval Academy, “Winning is such a great feeling. Nothing like winning — you got to win.... Victory, winning, beautiful words, but that is what it is all about.”

What is all about winning? War and the Olympics? A college coach who tells that to his players might face a public outcry. Not because of any new “cancel culture”, but because it was never right in the first place. So what does Trump mean by saying that people would beg him to stop winning?

He certainly didn’t mean foreign policy, where competition and cooperation battle each other. By asserting that we are competing against everyone to make America first, Trump squandered in a few years the worldwide cooperation that has taken decades to build. The incidents demonstrating Trump’s disrespect for the leaders of our closest allies are too many to enumerate. His disrespect for the people of other countries, not just “shithole countries”, but all countries that are not the US, has turned the world’s people against America. People in 13 countries allied with us, from Canada to Denmark to the UK to South Korea, rate Trump at the bottom of the short list of world leaders. 83% have no confidence in Trump to do the right thing in world affairs, placing him behind Putin and Xi. Across all 13 countries since 2000, the proportion who had a favorable view of the US was highest under Obama and now is lowest in 2020, having dropped by nearly half in every country. The friends of America are no longer so friendly. That’s losing.

Our enemies are stronger now than when he took office. Iran is closer to having a bomb. North Korea has built new missiles. China is destroying the remnants of democracy in Hong Kong.

Those enormous losses developed since he took office. His earlier financial losses have only gradually come to light, now that someone finally got a look at his tax records. Trump told the IRS about nearly $1 billion in financial losses from his companies in the 1990s. From one of America’s richest families, in recent years he was able to convince only one bank, the deeply troubled Deutsche Bank, to lend him money, after defaulting on many previous debts. Maybe Trump can call getting huge sums from banks and then not paying them back “winning”, but to the rest of us that’s losing.

Maybe by “winning” Trump means conning people out of money, but not going to jail. Then he’s a big winner: Trump had to pay $25 million to 7,000 former Trump University students; he admitted in court that he used funds from the “charitable” Donald J. Trump Foundation to pay off his own debts and buy a portrait of himself;

he was found guilty of cheating the Polish workers who demolished the Bonwit Teller store in Manhattan, a beloved Art Deco landmark, to make way for Trump Tower.

Then there are the simple business failures: his 4 bankruptcies; losing $135 million at his golf courses since 2000; losing $55 million at his Washington hotel since he has been President, despite forcing the global elite to stay there to get into his good graces. All told, the businesses Trump owns have lost money since 2000.

Maybe he just means the other cons he pulled successfully, like getting into college by paying someone else to take his SATs or getting out of the draft with a note from a friendly doctor.

He didn’t mean that his Party is winning. In the 2018 election, the large Republican House majority was decimated. Now the Republican Senate majority is in jeopardy. Maybe he means setting a record for the coming and going of Cabinet secretaries and close advisors.

In the most important battle of all, where losing means losing one’s life, Trump has presided over 220,000 coronavirus deaths, while proclaiming victory every month. By Inauguration Day 2021, there will probably be over 400,000 deaths.

Let’s give Trump credit for some important wins. ISIS has been pushed back, but not eliminated, as he often claims. Many, many conservative judges have been confirmed. Regulations that protect our health have been wiped out. Billionaires won gigantic tax cuts, paid for by the rest of us. Does that make anyone bored with winning?

Trump is not only a loser, but he has no idea how to win. He has squandered every opportunity to create a winning campaign this year, most notably being unable to turn his coronavirus episode to any advantage. His insistence on holding wild campaign rallies that both threaten to infect his supporters and turn off possible uncommitted voters has led to the opposite of winning. He has been unable to articulate any plan for a second term.

Except as a Halloween costume, the Trump SO MUCH WINNING T-shirt is not worth much.

Where has he been winning? Trump’s greatest triumph is the image of himself as a successful man. Trump is not a winner, but he performed one on TV. His lavish lifestyle has been funded, not by his own businesses, but by selling his image, by flamboyant spending of his father’s money, by a performing the tycoon on “The Apprentice”, and by licensing his name.

For years Trump has been playing a winner, while he loses in nearly every arena he enters. He did win a close election in 2016. That made us all losers.