Blogs > Ronald L. Feinman > More Senators Who Made an Impact, Despite First Being Appointed (Not Elected)

More Senators Who Made an Impact, Despite First Being Appointed (Not Elected) 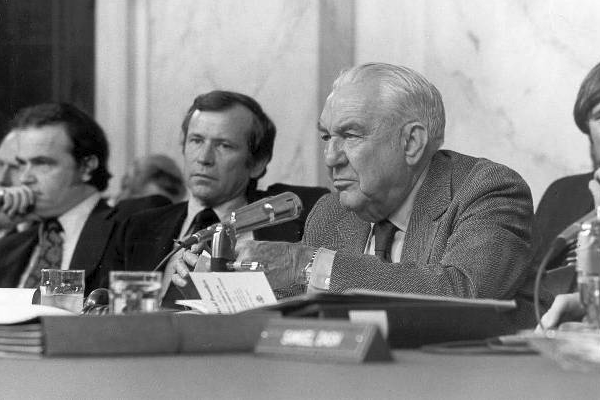 A previous essay identified several US Senators who were initially appointed to their seats, rather than winning election. In the second half of the 20th century, six other senators achieved historical significance despite originally being appointed on a temporary basis.

Sam Ervin (D-NC) served in the Senate for more than 20 years from 1954-1974, after being originally appointed on a temporary basis in early 1954. He defended segregation and Jim Crow laws, and was somehow also seen as a constitutional expert, although he generally referred to himself as a simple “country lawyer.” He opposed the Supreme Court decision in Brown v. Board Of Education in 1954, and promoted the Southern Manifesto in 1956, urging defiance of that decision.  He also opposed the Civil Rights Act of 1964, the Voting Rights Act of 1965, the Immigration and Nationality Act of 1965, and the proposed Equal Rights Amendment.

But this negative record was contradicted by a number of other positions.  He was also a defender of civil liberties, while not of civil rights, and was an opponent of “no knock” search laws, invasions of privacy through data banks, and lie detector tests, and was also opposed to a constitutional amendment advocating prayer in the public schools. Ervin also opposed making illegally gained evidence admissible in criminal trials.  Ervin also was one of the small band of senators who challenged Joseph McCarthy of Wisconsin in the last year before McCarthy’s censure by the US Senate at the end of 1954.

Even more significant was his leadership on the Senate Watergate Committee in the late spring of 1973, investigating the background of the emerging scandal which would bring down President Richard Nixon. The Ervin Committee’s investigation would lead to impeachment charges in the House Judiciary Committee, and Nixon’s ultimate decision to resign.  Ervin became a national hero and gained great publicity at the Watergate hearings with his personal charm and Southern drawl and mannerisms. He was suspicious of the abuse of presidential power, a concern that is ever more significant in the 21st century.

Walter Mondale (D-MN) served in the US Senate for 12 years from 1964 to 1976. He was first appointed to finish out the term of Hubert Humphrey when the latter became Lyndon Johnson’s vice president. Mondale had served as Minnesota’s Attorney General from May 1960 to December 1964, and would leave the Senate in 1976 after being elected Vice President under Jimmy Carter, just as his mentor Humphrey had done 12 years earlier.  Similarly, Mondale served one term as Vice President, and like Humphrey, both of them ran for President and lost, in 1968 for Humphrey and 1984 for Mondale. However, Mondale is seen as perhaps the most active and engaged Vice President; his service under Carter was as close to a “co-presidency” as America has seen. Humphrey, sadly was neutralized under Johnson, which undermined his presidential campaign in 1968. Mondale was able to expand the vice presidential role to include being a presidential advisor and full-time trouble shooter for Carter. He held a vice presidential office in the White House, and had weekly lunches with the president, a tradition which has continued ever since the late 1970s.

While in the senate, Mondale became a leader on such issues as consumer protection, fair housing and desegregation and tax reform. Notably, he was a member of the 1975 Select Committee To Study Governmental Operations With Respect To Intelligence Activities, led by Senator Frank Church of Idaho, which later led to the creation of the Senate Select Committee on Intelligence. After being in private life following his defeat in 1984, Mondale came back to public service from 1993 to 1996, serving as Ambassador to Japan. Mondale has survived post-vice presidency longer than any other vice president, more than 40 years, sharing with his “boss” Jimmy Carter amazing longevity after service in the White House.

Ted Stevens (R-Alaska) served 40 years in the Senate from 1968 to 2009, and was the longest-serving Republican senator until Senator Orrin Hatch of Utah surpassed him in 2017.  Originally appointed to a vacant seat, he was elected to that seat two years later, and won overwhelming victories for reelection until he lost his seat in 2008 in an election that closely followed his indictment and conviction on federal charges of failing to report gifts (the conviction was overturned for prosecutorial misconduct).  He was President Pro Tempore of the Senate from 2003-2007, and was the Chair of several committees during his career, including the Ethics, Rules, Governmental Affairs, Appropriations, and Commerce Committees.  Stevens was also Senate Minority Whip and Senate Majority Whip during the Carter and Reagan administrations, respectively.

Stevens’ key historical role was in the sponsorship and promotion of Alaska’s economic and social development, including the Alaska Native Claims Settlement Act, the Trans-Alaska Pipeline Authorization Act, the Alaska National Interest Lands Conservation Act, and the Magnuson-Stevens Fishery Conservation and Management Act.  He was also notable for his promotion of the Amateur Sports Act of 1978, which resulted in the establishment of the US Olympic Committee. Stevens also had earlier been engaged in promoting Alaska Statehood and served in the Alaska legislature during the mid 1960s before his Senate appointment in 1968, having lost two Senate bids in 1962 and 1968.

Howard Metzenbaum (D-Ohio) served nearly 20 years in the US Senate, starting in 1974 by appointment, and by election from 1976-1995, after eight years in the Ohio legislature from 1943-1951. Born to an immigrant Jewish family in poverty, Metzenbaum became a successful lawyer and businessmen, and became very wealthy through real estate investments in the Cleveland metropolitan area.  He ran for the senate in 1970 and lost to Robert Taft, Jr. Metzenbaum was appointed to the Senate in 1974, but then lost that year’s Democratic primary for the seat to astronaut John Glenn, who won a general election landslide.  However, in 1976, Metzenbaum defeated Taft, the son of the icon of conservative Republicanism. Metzenbaum would serve in the Senate for the next 18 years until his retirement in 1995.

Metzenbaum would gain the reputation of being a prominent liberal, highly controversial for his strong convictions and ability to gain and keep the attention of the news media.  He was active on the Senate Judiciary Committee, particularly on the issues of antitrust and consumer protection legislation.  He became a master of the filibuster tactic, and was a leader in the support of abortion rights for women.  Metzenbaum was also strongly pro-labor, advocating legislation requiring warning periods for large factory closures.  He was active in promoting legislation to prohibit federally subsidized adoption agencies from delaying or denying child placement on grounds of race or ethnicity.  He also was a major promoter of the Brady Handgun Violence Prevention Act of 1993, which mandated federal background checks on firearms purchasers.

George Michell (D-Maine) served in the US Senate from 1980 to 1995, originally by appointment to replace Senator Edmund Muskie, who had been appointed Secretary of State by Jimmy Carter. Mitchell won the seat in 1982, and served two complete terms in the Senate.  Mitchell’s senate service followed a legal career working for the federal government, culminating in appointment as a US District Court Judge by President Carter. He moved up rapidly in senate leadership, and was Majority Leader from 1989-1995. He promoted the Americans with Disabilities Act, the Clean Air Act, the North American Free Trade Agreement, and the formation of the World Trade Organization.  He had the opportunity to be appointed to the US Supreme Court in 1994, but passed on it to try to promote President Bill Clinton’s health care legislation, which failed. Mitchell retired at the end of his term in 1995.

But this was not the end of Mitchell’s public career, as he became Clinton’s Special Envoy for Northern Ireland in 1995, brokering the Good Friday Agreement in 1998 that ended the sectarian violence between Catholics and Protestants that had raged since 1969.  Mitchell was awarded the Presidential Medal of Freedom in 1999 and nominated for the Nobel Peace Prize in 1998 for his efforts.  He also was engaged in the Middle East peace process, regarding the Arab-Israeli conflict, first under Bill Clinton and then later under President Barack Obama, but won no long-term results. Some parties were suspicious of his involvement due to his Lebanese ethnicity.  Mitchell was also on a short list to be Al Gore’s running mate in 2000, and to be Secretary of State if Gore had won (Obama considered him for the same Cabinet post in 2009).  He also was on the board of several corporations, including the Boston Red Sox and Walt Disney Company, and was involved in Major League Baseball’s investigation of steroids and performance-enhancing drugs in 2006-2007.  He remains very much involved in public life at age 87.

Dan Coats (R-Indiana) served in the senate twice, from 1989 to 1999 and from 2011 to 2017. The first time, he was appointed to replace Vice President Dan Quayle, and elected in 1990 to serve the remainder of the term, and then reelected for one full term before retiring.  But Coats decided 12 years later to run for his old Senate seat, and served another term until a second retirement.  Previously, Coats had served in the House of Representatives from 1981-1989.  Coats’s voting record in both the House and the Senate can be described as traditionally conservative.  He was highly respected, however, as a serious legislator. After his first Senate stint, he also served as US Ambassador to Germany under President George W. Bush from 2001-2005, after being on a short list to be the Secretary of Defense.

After his second Senate retirement, Coats served as Director of National Intelligence under Donald Trump from 2017 to 2019.  He had served on the Senate Select Committee on Intelligence. Coats often clashed with Trump, as Coats was concerned about Russian meddling in American elections, which Trump denied.  But Coats was courageous in his open criticism of Trump, not only on Russia, but also on North Korea and Iran.  Trump’s meddling with Ukraine’s President to undermine Joe Biden through innuendo seemed to have spurred Trump to announce the dismissal of Coats, because of his clear disloyalty to the Trump agenda, and his willingness to be publicly blunt.  This controversy led to Trump’s first impeachment trial in late 2019. There was speculation, still unproven, that Coats might have been the author of an anonymous letter published by the New York Times in September 2018 voicing criticism of Trump’s foreign policy as dangerous to American national security. Coats is now retired, with a public image of having been a serious leader on intelligence, but unable to affect Donald Trump, who had worked to undermine the intelligence community.

So these six senators, along with the six other senators discussed in the first article of this two part series, prove that beginning a senate career by being appointed does not preclude an impactful career.