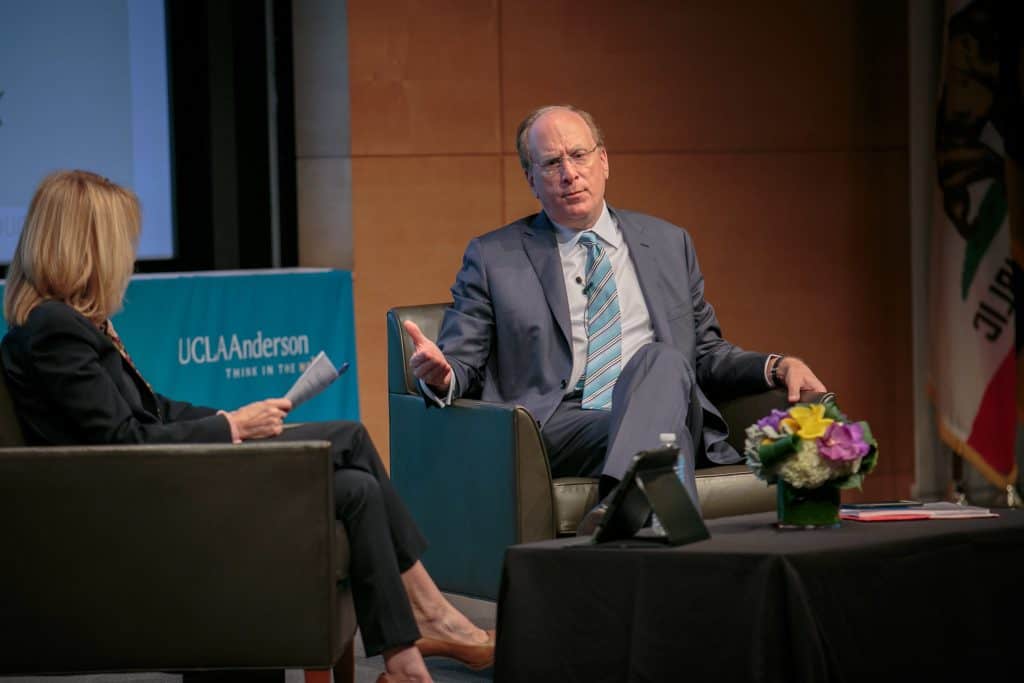 In a recent interview with Fox, BlackRock CEO Larry Fink claimed that “we have to get our employees back in the office.” According to him, doing so would result in “rising productivity that will offset some of the inflationary pressures.”

Fink did not provide any data in the form of statistics, surveys, or studies to support his claims about supposedly low remote work productivity or its impact on inflation. He simply insisted, without evidence, that in-office work would reduce inflation. So what does the data say?

And if you like audio, here’s a podcast based on the blog:

A widely-cited July 2022 study from the highly-respected National Bureau of Economic Research (NBER) found strong evidence that remote work decreased inflation. Namely, because employees have a strong preference for mostly or full-time remote work, they are willing to accept lower wages to work remotely. As a result, the researchers found that remote work decreased wage growth by 2 percent over the last two years. Notably, the decrease in growth occurred specifically in the mostly higher-paid, white-collar positions that could be done remotely, leading to wage compression that reduced wage inequality between blue-collar and white-collar work. Given that higher wages result in more consumer spending that leads to inflation, the study concluded that remote work reduces inflation.

Plenty of other evidence backs up the finding that remote work reduces wage growth, such as a June 2022 survey by the Society for Human Resources. It reports that 48% of survey respondents will “definitely” look for a full-time WFH job in their next search. To get them to stay at a full-time job with a 30-minute commute, they would need a 20% pay raise. For a hybrid job with the same commute, they would need a pay raise of 10%. A different survey of 3,000 workers at top companies such as Google, Amazon, and Microsoft found that 64% would prefer permanent work-from-home over a $30,000 pay raise. Indeed, companies that offer remote work opportunities are increasingly hiring in lower cost-of-living areas of the US and even outside the US to get the best value for talent. That’s a major reason why one of my clients, a late-stage software-as-a-service startup, decided to offer some all-remote positions.

This data shows that remote work decreases costs of labor and thus reduces inflation. What about Fink’s claims about productivity?

Surveys have long found that workers report being more productive working remotely, but we might feel some skepticism for self-reported answers. It’s harder to feel skeptical of evidence from employee monitoring software company Prodoscore. Its President David Powell said that, “after evaluating over 105 million data points from 30,000 U.S.-based Prodoscore users, we discovered a five percent increase in productivity during the pandemic work from home period.”

A July 2022 study reported in another NBER paper found that productivity growth in businesses widely relying on remote work like IT and finance grew from 1.1% between 2010 and 2019 to 3.3% since the start of the pandemic. Compare that to industries relying on in-person contact, such as transportation, dining, and hospitality. They went from productivity growth of 0.6% between 2010 and 2019, to a decrease of 2.6% from the start of the pandemic.

Case study evidence backs up these broader trends, as reported in another NBER paper about a study at a real-world company, Trip.com, one of the largest travel agencies in the world. It randomly assigned some engineers, marketing workers, and finance workers to work some of their time remotely and others in the same roles to full-time in-office work. Guess what? Those who worked on a hybrid schedule had 35% better retention, and the engineers wrote 8% more code. Writing code is a standardized and very hard measure of productivity, and provides strong evidence of higher productivity in remote work.

The evidence demonstrates that remote labor both costs less and is more productive, reducing inflation at both ends. What about ancillary costs?

Employees can save a lot of money, up to $12,000 for full-time remote work according to a Flexjobs analysis. That involves savings on transportation, such as gas, car maintenance, and parking, or public transportation. Workers also don’t have to buy expensive office attire, or eat out at overpriced downtown restaurants. Workers do need to pay somewhat more for cooking at home and higher utilities. Yet these costs are much smaller than the costs of coming to the office.

Companies save a lot of money on real estate, utilities, office furniture, cleaning services, and related costs. An average office space per employee can be up to $18,000 per year, which means savings can add up fast. No wonder office occupancy is down and companies are cutting their real estate footprint. For example, Amazon - which allows full-time and part-time remote work - recently paused its construction of five towers in Bellevue, Washington, due to remote work.

Companies are investing more into support for work from home, such as IT and cybersecurity. And more forward-looking ones are providing remote work support for home offices. For instance, Twitter, Facebook, and Google provided a flat stipend of $1,000 for home offices. As another alternative, one of my clients, the University of Southern California’s Information Sciences Institute, researched the best options for home offices and provides a standardized and wide range of home office technology and furniture to its staff. Doing so improves productivity, and is a wise long-term investment. And such expenses are much less than the costs of employees in the office.

Thus, in addition to lower labor costs and higher productivity, both employees and employers pay much less to have staff work remotely. All the evidence shows that remote work decreases inflation.

Information on how remote work reduces inflation is easily available, and Fink could have assigned a summer intern at BlackRock to find the evidence, but chose not to do so. He’s not the only one, joining many prominent CEOs in driving employees back to the office. What explains this seemingly contradictory behavior?

As a behavioral science expert in decision making around the future of work, I can tell you that I’ve observed many leaders exhibiting poor judgment, likely due to a combination of cognitive biases. One is called the belief bias, where our belief in the desirability of an outcome - such as Fink’s desire for workers to return to the office - causes us to misinterpret the evidence supporting this outcome. Another is the confirmation bias, where we look for evidence that confirms our beliefs, and ignore evidence that does not.

These mental blindspots impact decision making in all life areas, ranging from the future of work to relationships. Fortunately, recent research has shown effective and pragmatic strategies to defeat these dangerous judgment errors, such as by constraining our choices to best practices.

Thus, while the facts clearly show that remote work reduces inflation, improves productivity, and reduces costs, it took a lot of effort to convince some traditionalist executives within my client organizations about the benefits of remote work. Their personal discomfort – due to these cognitive biases – undermined their judgments. It took a discussion about cognitive biases and how we should avoid trusting our intuitions in new contexts to turn them around.

Hopefully, prominent CEOs like Larry Fink and many others will recognize the dangerous consequences for inflation and for the bottom lines of their companies of driving employees back to the office. Otherwise, their companies and the economy as a whole will suffer. Their poor judgment should be a lesson to all business leaders to rely on the facts, and not wishful thinking, in their public communication and decision making.

The claim by BlackRock's CEO, Larry Fink, that bringing employees back to the office will increase productivity and reduce inflation is wrong. Surveys and studies contradict what Fink said and show that remote work definitely helps fight inflation by reducing wage growth, boosting productivity, and lowering labor costs. Research shows remote work lessens wage-growth pressures. In fact, employee surveys at top companies reveal workers prefer permanent work-from-home above a pay raise. More companies are employing remote workers from low-cost areas to reduce expenses, thus reducing inflation. Similarly, surveys have long found that workers report being more productive working remotely. In addition, remote work has much lower employee costs than office work, which is why companies are investing more in remote-friendly technologies to facilitate work from home. All of this suggests that cognitive biases like belief and confirmation bias led Fink to make a wrong guess about how remote work would affect inflation. Recognition of these facts, rather than wishful thinking, would aid businesses in avoiding the perilous effects of inflation.

BlackRock CEO Larry Fink is wrong about remote work and inflation. Remote work productivity is higher and thus reduces inflation, and other costs in remote work are lower, which also decreases inflation...> Click to tweet

Bio: Dr. Gleb Tsipursky helps tech and finance industry executives drive collaboration, innovation, and retention in hybrid work. He serves as the CEO of the boutique future-of-work consultancy Disaster Avoidance Experts, which helps organizations adopt a hybrid-first culture, instead of incrementally improving on the traditional office-centric culture. A best-selling author of 7 books, he is especially well-known for his global best-sellers Never Go With Your Gut: How Pioneering Leaders Make the Best Decisions and Avoid Business Disasters (Career Press, 2019) and The Blindspots Between Us: How to Overcome Unconscious Cognitive Bias and Build Better Relationships (New Harbinger, 2020). His newest book is Leading Hybrid and Remote Teams: A Manual on Benchmarking to Best Practices for Competitive Advantage (Intentional Insights, 2021). His writing was translated into Chinese, Korean, German, Russian, Polish, Spanish, French, and other languages. His cutting-edge thought leadership was featured in over 650 articles and 550 interviews in prominent venues. They include Harvard Business Review, Fortune, Inc. Magazine, CBS News, Time, Business Insider, Government Executive, The Chronicle of Philanthropy, Fast Company, Boston Globe, New York Daily News, Fox News, USA Today, and elsewhere. His expertise comes from over 20 years of consulting, coaching, and speaking and training for mid-size and large organizations ranging from Aflac to Xerox. It also comes from his research background as a behavioral scientist. After spending 8 years getting a PhD and lecturing at the University of North Carolina at Chapel Hill, he served for 7 years as a professor at the Ohio State University’s Decision Sciences Collaborative and History Department. A proud Ukrainian, Dr. Gleb lives in Columbus, Ohio (Go Bucks!). In his free time, he makes sure to spend abundant quality time with his wife to avoid his personal life turning into a disaster. Contact him at Gleb[at]DisasterAvoidanceExperts[dot]com, follow him on LinkedIn @dr-gleb-tsipursky, Twitter @gleb_tsipursky, Instagram @dr_gleb_tsipursky, Facebook @DrGlebTsipursky, Medium @dr_gleb_tsipursky, YouTube, and RSS, and get a free copy of the Assessment on Dangerous Judgment Errors in the Workplace by signing up for the free Wise Decision Maker Course at https://disasteravoidanceexperts.com/newsletter/.