Mel Ayton has written numerous books and articles, including A Racial Crime, the story of Dr. Martin Luther King’s assassin, and The Forgotten Terrorist: Sirhan Sirhan and the Assassination of Robert F. Kennedy (Potomac Books, 2007). Ayton has appeared in documentaries produced by the National Geographic Channel (CIA Secret Experiments, 2008) and the Discovery Channel (CIA Mind Control, 2006; Conspiracy Test: The Robert Kennedy Assassination, 2008) and has worked as a historical consultant for the BBC. He lives in County Durham, England. 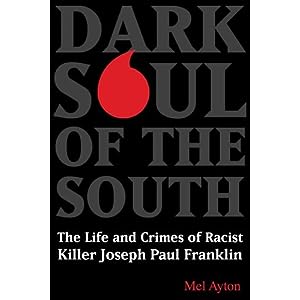 In 2010 the U.S. Supreme Court cleared the way for executions to start again in Missouri when it refused to hear the Missouri lethal injection case, Clemons v. Crawford.  In response, Missouri's attorney general stated executions would recommence.  He also said he wanted Potosi Prison Death Row inmate and racist killer, Joseph Paul Franklin, to be the first to die.

The impending execution of Franklin occurs at a time when Americans are becoming especially fearful that, with the election of an African American president, the country’s extreme right wing will begin a new campaign of violence and hatred and spur yet another young misfit like Franklin into believing he is doing God’s work through murder, assassination and other violent acts.  In April 2009 the Department of Homeland Security issued a new alert warning of the dangers posed by approximately 926 hate groups documented by Morris Dees’ Southern Poverty Law Center (SPLC).  The alert stated that “white supremacist lone wolves” and “small terrorist cells embracing violent right-wing extremist ideology” are currently the most significant domestic terrorism threat.  The 2009 shooting of a security guard by an 88-year-old neo-Nazi Holocaust denier at the Washington D.C. Holocaust Museum and the 2011 attempted assassination of Congresswoman Gabrielle Giffords by an extremist misfit persuaded some experts that it heralded a possible surge in hate crimes.

In 1977 Franklin, a self-proclaimed racist and anti-Semite, began his murder spree after concluding the organizations he had joined—the American Nazi Party, the States Rights Party and the Ku Klux Klan—were not serious enough in putting their extremist and violent beliefs into practice.  Between 1977 and 1980 Franklin acted as a “lone wolf” assassin roaming the length and breadth of the United States in pursuit of Jews, African Americans and especially interracial couples who he believed were “beasts ready for the slaughter.”  In a three-year period he bombed the home of a Jewish lobbyist in a Washington D.C. suburb and a synagogue in Chattanooga, Tennessee; used a sniper rifle to kill a congregant outside a St Louis synagogue; shot and wounded civil rights leader Vernon Jordan; shot and paralyzed magazine publisher Larry Flynt; killed two African American joggers in a sniper shooting in Salt Lake City; shot and killed two young African American boys in a sniper shooting Cincinnati, Ohio; successfully targeted with his sniper rifle interracial couples in Pennsylvania, Oklahoma, Georgia and Wisconsin; and shot and killed African American men in Doraville, Georgia, Falls Church, Virginia and Indianapolis, Indiana.  He also murdered four young women who had confessed to him they had had sexual relationships with black men.  Eventually, he was sentenced to numerous life sentences but received the death penalty only once, for the 1977 murder of Gerald Gordon in Richmond Heights, St Louis.

As a young boy Franklin suffered years of abuse from his parents.  Although Franklin’s murderous acts can undoubtedly be traced back to the constant beatings his father gave him, they were also the result of his indoctrination by extremist groups he joined—the Ku Klux Klan, the American Nazi Party and the National States Rights Party (NSRP).

Uneducated and shiftless young men like Franklin were targeted by the KKK, the American Nazi Party and the NSRP in their membership drives.  During Franklin’s adolescence in the 1960s many young white men were persuaded to channel their bitterness about the race issue into supporting extremist groups like the KKK and in committing acts of violence in furtherance of the white supremacist cause.  And in many ways they were allowed to get away with it.  State governments in the South turned a blind eye to brutalities against African Americans and thus perpetuated a racial culture whereby white violent racists felt they could act with impunity.  Franklin was only too aware that whites who committed hate crimes did not suffer the harsher sentencing that ordinary criminals were given—often they were acquitted.  This idea was central to James Earl Ray’s beliefs about wanting to kill Martin Luther King Jr in a southern state.  Ray believed that if he was caught he would suffer the same fate as other racist killers of the era.  Ray knew that the murderers of the civil rights workers in Philadelphia, Mississippi in 1964 and the murderers of Medgar Evers and Viola Luizzo had escaped justice.  Local juries in civil rights cases would either acquit or judges would administer lenient sentences.

Franklin’s first targets in his lone wolf mission were Jews.  As a young man Franklin was taken with the idea of a Jewish conspiracy, a bogus and intellectually flawed thesis which had been promoted by right-wing groups.  The literature he read alleged the American government was controlled by a secret cabal of Jews who were bent on taking control of the world and that the Jews were the vanguard of the civil rights movement.  And, if Franklin believed that Jews and African Americans were subhuman, he would feel no guilt in exterminating them.  The dehumanization of the Jews justified his acts of violence against them and that such acts could be committed without violating biblical injunctions.

After bombing the home of a Jewish lobbyist in a quiet Washington suburb, dynamiting a Chattanooga synagogue and killing a Jewish congregant in St. Louis, Franklin changed tack and sought out African Americans as targets, especially African American men who were associating with white women.  Franklin’s targeting of mixed-race couples originated in the long-held idea that interracial couples were “Godless.”

When Joseph Paul Franklin joined the KKK in Atlanta in the early 1970s, his belief that the mixing of the races was an “abomination” was reinforced by the extremist organization.  One of the Klan’s beliefs was the idea that if the black man was given equal rights with whites the white male population would suffer along with their wives and girlfriends who would become targets for sexually aggressive black men.  The Klan also promoted the idea that racial mixing would forever be a stain on the honor of the Southern white population.

In the late 1960s the American Nazi Party was the first extremist organization Franklin joined.  Without any hint of irony the party’s leader, George Lincoln Rockwell, once said, “That’s one great trouble with our movement, ninety percent of the people in the movement are lunatics.”

Disillusioned with the American Nazi Party because its membership was more interested in talking about revolution than fomenting it, Franklin moved to Atlanta and joined the National States Rights Party, led by J.B. Stoner.  Around this time he also joined a Georgia branch of the KKK.  The New York Times described the organization as, “….the ideal merger of Klan and Nazi philosophies”.

Prior to his three-year murder spree Franklin had been well primed.  Wishing to belong, he never questioned the group’s beliefs and once a paranoid belief system is established in a group, ergo the German people in the 1930s, it is nearly impossible to dislodge.  Furthermore, immersing himself in these hate groups made it much more likely he would commit murder even if he was not predisposed to it.  Franklin’s sense of mission to rid America of Jews and African Americans, which he repeated to anyone who would listen in the early days of his murder spree, was constantly reinforced by his fellow Klansmen and Nazis, and there was no one he came into contact with who could tell him his ideas were lunacy.

Franklin’s experiences growing up in a poor dysfunctional family in the South is a stark reminder of how hate groups can provoke young men, especially those who are fatherless or feel abandoned by society, into violent acts in the name of a “higher ideal.”  In order to compensate for his shortcomings, Franklin identified with powerful yet dangerous elements in society that reflected the bigoted views he was tutored in by his parents.  The American Nazi Party, the NSRP and the KKK were, in effect, “facilitators” and came to represent the family he never really had.  Through the organizations he joined he achieved what was missing at home—a sense of belonging and a vague feeling of his own importance.  As Morris Dees of the Southern Poverty Law Centre observed, the Ku Klux Klan and American neo-Nazis undoubtedly share “moral responsibility” for Franklin’s killings.