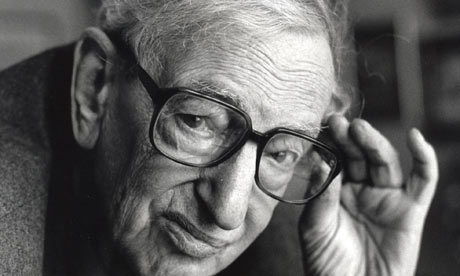 ...Everything Hobsbawm wrote deceitfully downplayed the grim role of the Communists in Spain in the Thirties or the forcible nature of the coups the Soviets carried out in Eastern Europe after 1945. Such a cosmopolitan thinker had ironically become imprisoned within a deeply provincial ideological ghetto, knowing or caring nothing for the brave Czechs or Poles who resisted Stalin’s stooges, while being manifestly nonplussed by the democratic transformations of Central Europe since 1989-90. That the secret police – the Sword and Shield of the Revolution – would end up running Vladimir Putin’s FSB-mafia state was literally inexplicable to him.

Hobsbawm’s implacable refusal to recant his views when faced with their grotesque consequences tells us something about the belligerent mindset of the wider British Left. But the eminence that he and his fellow travellers have enjoyed also speaks to the bovine complacency with which, since Mrs Thatcher, the Conservatives have allowed such dubious figures licence to dominate the soft culture of the BBC and our universities.

It may surprise readers of the Guardian to know that Eric Hobsbawm and I were friends.

We were poles apart politically, of course. I still remember the disappointment I felt when I read his autobiography, Interesting Times, which I had hoped would contain some expression of remorse for his decision to remain a member of the Communist party even after the exposure of Stalin's crimes. Indeed, we disagreed about most contemporary political questions.

But his politics did not prevent Hobsbawm from being a truly great historian. I continue to believe that his great tetralogy – The Age of Revolution (1962), The Age of Industry (1975), The Age of Empire (1987) and The Age of Extremes (1994) – remains the best introduction to modern world history in the English language.

Eric Hobsbawm, who died on October 1 at the age of 95, was perhaps the twentieth century’s preeminent historian and a life-long advocate of social justice. Born in Alexandria, Egypt, in 1917 to a British father and Austrian mother, he was educated in Vienna and Berlin. His family sent him to London in 1933 when Hitler came to power and he lived for the rest of his life in England, where he taught for many years at London’s Birkbeck College....

Hobsbawm’s historical writings brought to bear a sophisticated Marxist analysis that saw class conflict as a driving force of historical change but rejected narrow economic determinism and teleological frameworks. Like Marx himself, Hobsbawm saw capitalism as a total social system, which had to be analyzed in its entirety, and rejected notions of historical inevitability. He insisted that people must strive to envision a more humane social order, but that history had no predetermined trajectory. His 1978 essay “The Forward March of Labor Halted?” offered a prescient and disturbing warning that the postwar expansion of social democracy and the power of organized labor, considered irreversible by many leftists, had reached a crisis point. His writings on the history of British labor helped to launch the “new social history” that dominated historical scholarship in Britain and the United States in the 1970s and 1980s. Yet in an influential 1971 essay, “From Social History to the History of Society,” he warned that studies of the agency of ordinary people, so important in expanding the cast of historical characters, must be placed in the broader context of how social and political power is exercised....

Most historians are by nature either short-story writers or novelists; Eric Hobsbawm was both. While his organising framework was Marxian (beginning as "an attempt to understand the arts", as he said himself), the subjects included mountain-climbing, opera, jazz and sartorial and eating fashions as well as work patterns, class solidarity and the movements of international finance – all delivered in a marvellously flexible and pungent style.

...[His] best book, at least to my mind, remains the memoir “Interesting Times” (2002), one of the very few—dare I say—great life stories of a historian. (I wrote about it for The New Yorker.) His memoir enacts the core principles of all his historical work: he wrote for the public, not just for the guild, and he wrote not only with compelling narrative, which is how popular history is delivered, but with strong analysis, too. Does that add up to more than legions of students and well-grounded original interpretations? It is arguably Hobsbawm’s overall life/work rather than any single piece that has been and will continue to prove most influential. On that front, there’s also this: having embraced and never relinquished the passionate early Marx, E. J. Hobsbawm, as he reaffirmed in his last book, was in it to change the world.

[T]hrenodies are not an argument, and memories are definitely not facts (Hobsbawm's pithy condemnation of oral history, delivered at a conference where I was due to speak, was terrifying). Like the students who thumb through his books, we historians would do well to learn from this dazzling professional, though we need not read him for facts. Our lesson lies in his unflinching sense of engagement, his responsibility.

Of all the British Marxist historians, Eric Hobsbawm is probably the most read today, and that is a mark of his extraordinary intellectual flexibility.

...To be a man of Hobsbawm's generation was to have experienced the collapse of capitalism in the Great Depression, to be a Jew of Hobsbawm's generation was to have seen the rise of Hitler and Nazi Germany. In those years of the 1930s, the years when Hobsbawm was a brilliant youth, was to face what seemed to be a binary choice, to be with the Nazis or against them. And no one seemed to be more against the Nazis than the communists. Hobsbawm joined the Communist Party as a very young man, and was loyal, in his way, to the end.

Communism also offered, as perhaps no non-religious ideas do today, a sense of community. To belong to the Communist Party was to have a sense of conspiracy, a loyalty to friends who had suffered and would suffer more, and a collective sense that the struggle was not in vain, for a more glorious world could and would come. Like religion for Americans, who repeat that "things happen for a reason," communism offered a logic of pain and progress. Every arrest, every sentence to a concentration camp, every execution was not just a moment of horror, but further proof of capitalism's decadence and weakness....

Eric Hobsbawm, who was honored as one of Britain's most distinguished historians despite retaining an allegiance to the Communist Party that lasted long after many supporters had left in disgust, has died. He was 95.

Hobsbawm died early Monday at a London hospital, said his daughter Julia Hobsbawm. He had pneumonia and leukemia.

Read by generations of students and revered for his ability to make history come alive, Hobsbawm used his socialist perspective to tell stories from the people's point of view....

Despite his lucidity and widely attested personal decency, Hobsbawm also became an object lesson in the dangers of ideological devotion. His passion for justice drew him into a cause that would require him to excuse the many injustices that took place in the Soviet Union under Stalin. A lot of Western Communists abandoned ship after the Soviet crackdown on Hungary in 1956. Not Hobsbawm. Nor did he quit after the tanks rolled into Prague twelve years later. In a 1994 interview with Michael Ignatieff he famously claimed that if the Soviet Union had succeeded in creating a true communist society, it would have been worth the deaths of the twenty million people who perished under Stalin. Didn’t Marx himself say that ”no great movement has been born without the shedding of blood”? So self-sacrifice wasn’t the only kind of sacrifice that socialism might require.

When future generations come upon the webpages and news bulletins of the last 24 hours, something may puzzle them about their contents. How was it, they may ask themselves, that the death of a venerable Marxist historian could be seen as such a large shared national loss by so many people whose assumptions and worldviews often had so little in common with his? Worthy of an obituary, of course. But a front-page news story?

It is not an unreasonable question. Part of the answer lies in the late Eric Hobsbawm's sheer academic productivity and prowess. He cast the net of his curiosity far wider than most historians. He knew so much about so many things in the history of so many countries. And he had an unrivalled ability to marshal them in clear prose. No wonder he was such a sage to so many....

Eric J. Hobsbawm, whose three-volume economic history of the rise of industrial capitalism established him as Britain’s pre-eminent Marxist historian, died on Monday in London. He was 95.

The cause was pneumonia, said his daughter, Julia Hobsbawm.

Mr. Hobsbawm, the leading light in a group of historians within the British Communist Party that included Christopher Hill, E. P. Thompson and Raymond Williams, helped recast the traditional understanding of history as a series of great events orchestrated by great men. Instead, he focused on labor movements in the 19th century and what he called the “pre-political” resistance of bandits, millenarians and urban rioters in early capitalist societies.

The historian Eric Hobsbawm, who has died aged 95, is rightly being mourned as a great intellectual of modern times. Yet Hobsbawm was more than a powerful historian and political thinker; nor should he be remembered in solitary splendour. He was part of a group of British Marxist scholars who profoundly influenced our understanding of what culture is.

More than 50 years ago, a bunch of dissident Oxbridge-educated academic historians changed the way the British saw culture. They understood, long before anyone else, that culture is what shapes the world. They also saw that culture is totally democratic and comes from the people. While the official guardians of the arts, such as Kenneth Clark, were praising the "civilisation" of the elite on television and in print, Hobsbawm and co were resurrecting the lost cultures of Luddites, the masked poachers and anyonymous letter writers, of William Blake and John Milton. They discovered and popularised the value of popular culture – something so integral to our lives today it seems bizarre it was ever denigrated.

[A]n extraordinary historian, a man passionate about his politics and a great friend of my family.