How True is "Lincoln"?

David O. Stewart is the author of "Impeached: The Trial of President Andrew Johnson and the Fight for Lincoln’s Legacy." His novel about the John Wilkes Booth conspiracy, "The Lincoln Deception," will be issued in September 2013. 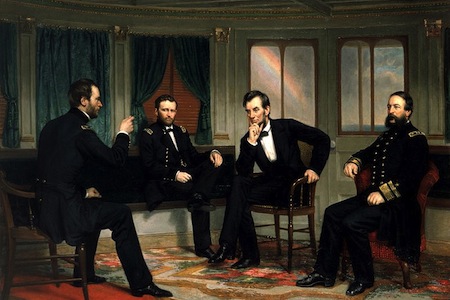 With history-minded Americans flocking to see Steven Spielberg’s Lincoln movie, many are beset with questions about the accuracy of some of the neglected facts and episodes featured in the film.

Lincoln focuses closely on about five weeks in early 1865, when the House of Representatives was debating the 13th Amendment and Confederate peace commissioners explored a way to end the Civil War. Weaving the two stories together with an intimate view of President Lincoln, his official family and his real family, the movie presents a compelling portrait of a leader in a time of extraordinary strain and challenge. Daniel Day-Lewis’s portrayal of Lincoln distills the man’s humor, intelligence, sadness, and power.

At least four fundamental questions will arise for any viewer who is not a Civil War junkie. I hazard responses to all four.

Were the House vote on the 13th Amendment and the Peace Conference with the Confederates really so closely intertwined?

Mostly. They certainly happened very near each other in time. The House voted on January 31, 1865. Lincoln and Secretary of State William Seward met three days later with three Confederate peace commissioners. During the House debate on January 31, an Ohio Democrat demanded to know if there were peace negotiations afoot. In response, Lincoln sent an evasive written message that no Confederate commissioners were on their way to Washington, which was narrowly true: there were such commissioners, but they were not on their way to Washington. They were in City Point, Virginia. The amendment passed by two votes.

Thus, the movie correctly shows a connection between the two historical episodes. It stretches, however, in suggesting that the two were interconnected at their inception: that Lincoln insisted that the amendment be ratified before he would talk peace with the Confederates. It’s that old causation-versus-correlation problem. Were the episodes like two trains on parallel tracks that happened to intersect once during the House debate, or were they connected from the beginning? For a Hollywood production, the movie’s version is more true than not.

Did Secretary of State Seward field a group of backstairs lobbyists to recruit Democratic votes for the 13th Amendment, even offering patronage jobs as inducements?

Absolutely. The episode is described in the recent biography of Seward by Walter Stahr, and at great length in a 1963 book by LaWanda Cox and John H. Cox, Politics, Principle and Prejudice, 1865-1866. The movie is accurate right down to the implausibly named lobbyist W.N. Bilbo, a rollicking political operative from Tennessee played with brio by actor James Spader. That it is difficult to identify the specific inducements offered to wavering Democrats is no basis for discounting the evidence: after all, no one intended for that information to become known, ever.

This is a question of considerable personal interest, as I encountered a strikingly similar operation -- also quarterbacked by Seward -- to secure acquittal of President Andrew Johnson on impeachment charges three years later. In my book Impeached, I concluded that patronage jobs and outright bribery were lavished to influence Senate votes, a conclusion with which Walter Stahr’s book concurs. Seward’s modus operandi was consistent, and effective.

Did Rep. Thaddeus Stevens really have a romantic liaison with his black housekeeper?

First, some quick applause for the moviemakers and Tommy Lee Jones for rescuing Thaddeus Stevens from the cinematic library of historical monsters. In both D.W. Griffith’s silent epic, Birth of A Nation, and the laughably inaccurate Andrew Johnson biopic, Tennessee Johnson, Stevens has been hammered onscreen as an irresponsible and dangerous zealot. Not so in Lincoln. In the current movie, he’s still dangerous but also an impressive politician. Thank you.

What of Stevens and his housekeeper, Mrs. Lydia Smith? In writing Impeached, I concluded that they were romantically involved, as was the widespread rumor at the time. The evidence is not overpowering, but sufficient. She was his paid housekeeper for many years. He always treated her with studied respect, addressing her as “Mrs. Smith” in the presence of others, an unusual courtesy toward black employees in that era. She cared for him through his final illness, sitting at the end of his bed for the last days. He left her money in his will.

The most telling evidence, highlighted in Fawn Brodie’s biography of Stevens, is that the congressman arranged to have Mrs. Smith’s portrait painted. As Brodie persuasively pointed out, no one pays for a portrait of a housekeeper, no matter how competent. That is an act of love.

The movie attributes its story to Doris Kearns Goodwin’s Team of Rivals; but I read that book and don’t remember any of this!

Well, it’s a long book that devotes about nine pages to the episodes in the movie. That’s 9 out of 754 pages. Goodwin’s treatment does not include quite a lot covered in the movie (for example, Seward’s merry band of fixers), nor does it definitively link the House vote on the 13th Amendment to the peace negotiations. (See the first question, above.) But it does provide the skeleton of the story, plus specific speeches delivered by Day-Lewis, including the seemingly un-Lincolnlike bellow that he is president and “clothed with immense power.”

The movie, of course, generates occasional squirms in the audience. It presents a range of Conversations That Never Happened, along with the puzzling image of Mary Todd Lincoln in the House gallery, attended by her black dressmaker, viewing the debate on the 13th Amendment. If Mrs. Lincoln was a habitué of House debates, it escaped the notice of the authors who wrote the Lincoln books on my shelf.

But on the whole, Lincoln the movie is reasonably solid history. Go see it with a clear conscience.