Law of Slavery Lies at Heart of Both "Lincoln" and "Django" 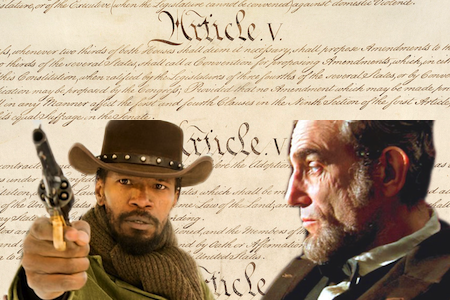 Appropriately marking the 150th anniversary of the Emancipation Proclamation, two of the season's Hollywood blockbusters, Quentin Taratino's Django Unchained and Steven Spielberg's Lincoln, are about, respectively, slavery and its abolition. And while they could not be more different in style, tone, and story, the two films are instructively complementary in reminding us of an uncomfortable truth about our nation's past: that underpinning slavery at the local, state, and national levels was the law, including the highest law of the land, the U.S. Constitution.

At one level Django, set in 1858 on the eve of the Civil War, can be viewed as simply a prelude to Lincoln. It captures essential realities of slavery, whose permanent demise Lincoln, set in 1865 near war's end, reminds us came through hard-fought pragmatic politics that produced the Thirteenth Amendment to the Constitution.

"Django" graphically shows the pervasive violence -- actual and potential, physical and psychological, capricious and everyday -- that enforced slavery. Surprisingly -- this is, after all, a Tarantino film -- it does so most effectively, not in its more sensational scenes, but in its simple shots of the whip-scarred backs of the title character (Jamie Foxx) and his fellow slaves, including his wife, Broomhilda (Kerry Washington). One leaves the theater with a visceral understanding of the fear and rage that slaveholders and slaves both lived with.

Django also provides a much-needed reminder of another awful reality of slavery: the nation's horrific domestic slave trade so critical to the rise of the cotton kingdom. Between 1800 and 1860 some one million slaves were forcibly moved from the Upper South to the Deep South, 60 percent of them through sale to traders. Like Harriet Beecher Stowe in her great 1852 antislavery novel, Uncle Tom's Cabin, Tarantino focuses less on slave labor than on the buying and selling of slaves, including the haggling over their monetary value. As in Stowe's novel, the slave traders in the film are a repellent blend of crudity, cupidity, and cruelty whose livelihood depends upon the forcible breakup of loved ones like Django and Broomhilda, for whose marriage slavery affords no legal protection.

The film's real achievement, however, is in highlighting slavery as a legal institution that gave masters ownership and control over the labor and bodies of the men, women, and children who by law were their human chattel. In the film's most chilling scene, the tyrannical slaveholder Calvin Candie (a creepy Leonardo DiCaprio) without hyperbole thunders, "Under the laws of Chickasaw County [Mississippi], Broomhilda is my property. And I can do anything with my property I so desire."

In the case of a female slave like her, we are led to understand, mercifully without heavy-handedness on Tarantino's part, that "anything" includes sexual domination at the master's whim. Candie's assertion of his property rights recalls the haunting words of Harriet Jacobs in her searing 1861 account of the psycho-sexual torments that she endured as a young slave, with "no shadow of law to protect" her from a master "who met me at every turn, reminding me that I belonged to him, and swearing by heaven and earth that he would compel me to submit to him."

While it is Django's violence that rescues Broomhilda from Candie's plantation, it is her "freedom papers," signed and sealed earlier by Candie in a transaction with Django's bounty-hunter mentor and partner, Dr. King Schultz (Christoph Waltz), that formally liberate her from slavery. Django underscores this point by carefully folding the papers and placing them in his coat pocket.

And here is where the movie is more than simply a prelude to Lincoln. The two films are complementary in a more important and fundamental respect. Despite all the gore that separates Django from Lincoln, the law and legal documents are at the heart of both movies: the Emancipation Proclamation and Thirteenth Amendment in Lincoln and bounty hunter warrants and especially Broomhilda's freedom papers in Django. Different as they are, both films demonstrate that it was not just violence and ruthless men like Candie that preserved slavery; it was the law itself. In short, slavery was a constitutional regime.

That is why the activist and scholar W.E.B. DuBois considered slavery one of those wrongs made "especially heinous, black, and cruel when it masquerades in the robes of law and justice and patriotism." It also helps explain why Abraham Lincoln believed that slavery's abolition must be enshrined by amendment to the U.S. Constitution.

In their own ways, the two films cinematically affirm recent scholarship by historians emphasizing the Constitution's proslavery nature. If we can be thankful that the framers of that document knew better than to include the words "slaves" and "slavery" in it, we must also acknowledge their collective responsibility for lending slavery the legal authority of the supreme law of the land, thereby sowing the seeds of the Civil War.

For the abolition of slavery, Union victory in battle was crucial, of course. But it was the Thirteenth Amendment that destroyed the legal edifice of slavery and, like Broomhilda's freedom papers writ large, ended the terrible suffering of some four million American slaves.