Is the Obama Administration Abandoning Its Commitment to a Nuclear-Free World?

Lawrence S. Wittner is Professor of History emeritus at SUNY/Albany. His latest book is "Working for Peace and Justice: Memoirs of an Activist Intellectual” (University of Tennessee Press). 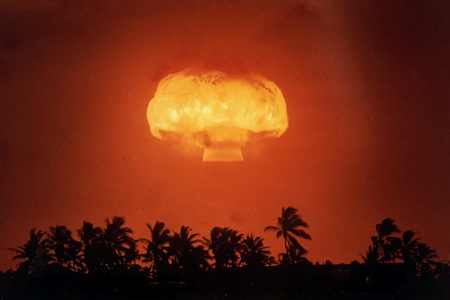 In a major address in Prague on April 5, 2009, the newly-elected U.S. president, Barack Obama, proclaimed "clearly and with conviction America's commitment to seek the peace and security of a world without nuclear weapons." On January 24, 2013, however, Senator John Kerry, speaking at Senate confirmation hearings on his nomination to become U.S. secretary of state, declared that a nuclear weapons-free world was no more than “an aspiration,” adding that “we’ll be lucky if we get there in however many centuries.” Has there been a change in Obama administration policy over the past four years?

There are certainly indications that this might be the case.

During the 2008 presidential election campaign, Obama made his support for nuclear weapons abolition quite clear on a number of occasions, most notably in Berlin. Speaking on July 24 before a vast, enthusiastic crowd, the Democratic presidential candidate promised to "make the goal of eliminating all nuclear weapons a central element in our nuclear policy." He argued that “this is the moment to secure the peace of the world without nuclear weapons.”

Obama certainly seemed to follow through with this program during his first year in office. His Prague speech of April 5, 2009 -- the first major foreign policy address he delivered as president -- was devoted entirely to building a nuclear weapons-free world. In September of 2009 he became the first American president in history to chair a meeting of the UN Security Council -- one dealing with nuclear disarmament and nonproliferation. The upshot was unanimous Security Council support for Resolution 1887, which backed the goal of nuclear abolition and an action plan to reduce nuclear dangers. Obama’s promotion of a nuclear weapons-free world played a key role in the announcement that October that he would receive the Nobel Peace Prize.

The anti-nuclear momentum, however, slowed somewhat in 2010. In April of that year, the White House released its Nuclear Posture Review, which did reorient U.S. policy toward less reliance on nuclear weapons. But the policy shifts were fairly minor and smaller than anticipated. Soon thereafter, the U.S. and Soviet governments announced the signing of the New START treaty, which set lower limits on the number of deployed nuclear warheads and deployed delivery systems for the two nations. Although the U.S. Senate ratified New START by a vote of 71 to 26, the reductions in all types of nuclear weapons held by the United States and Russia were actually rather modest. Consequently, the two nations continued to possess about 95 percent of the world’s nuclear weapons.

Much worse, from the standpoint of nuclear disarmers, was the fact that strong Republican opposition to the treaty led to an Obama administration retreat on the issue of building a nuclear-free world. The most obvious indication was the White House pledge to provide roughly $214 billion over the next decade for modernizing U.S. nuclear forces and infrastructure. Apparently offered in an attempt to buy GOP support for the treaty, this pledge set the U.S. government on a course that totally contradicted its talk of disarmament. In addition, however, the administration withdrew plans to submit the Comprehensive Test Ban Treaty (signed by President Bill Clinton in 1996) for Senate ratification, did not even begin negotiations for further nuclear arms reductions with Russia, and -- with the exception of mobilizing other nations against the possibility of Iran joining the nuclear club -- let nuclear arms control and disarmament vanish from the policy agenda. In 2011, Secretary of State Hillary Clinton remarked dismissively that a nuclear weapons-free world would be attained “in some century.” President Obama’s January 2013 inaugural address did not discuss a nuclear-free world, or even specific arms control and disarmament measures.

The hearings on Senator Kerry are revealing. As the Republicans were eager to have him leave the Senate and open up his seat for a Republican (presumably former Senator Scott Brown), Kerry had a very easy time of it, and used his newfound popularity to defend the more controversial Chuck Hagel, the administration’s nominee for secretary of defense. When the Republicans raised the issue of Hagel’s support for Global Zero, a group advocating the abolition of nuclear weapons, Kerry responded that he did not believe Hagel wanted to completely eliminate them. Kerry added that, personally, he favored a policy of nuclear deterrence and believed that “we have to maintain” the U.S. nuclear stockpile. “We have to be realistic about it,” Kerry explained, “and I think Senator Hagel is realistic about it.” Kerry’s remarks about the “many centuries” it would take to eliminate nuclear weapons emerged in this context.

Of course, actions can speak much louder than words. Kerry’s remarks might represent no more than soothing pabulum for GOP hawks. The real test of the Obama administration’s commitment to a nuclear-free world will be its actions in the coming years. Will it reduce expenditures for modernizing U.S. nuclear weapons and facilities, promote Senate ratification of the Comprehensive Test Ban Treaty, negotiate a treaty with Russia for deeper weapons reductions, and take actions that do not require Senate ratification (for example, join with Russia to remove nuclear weapons from high alert status)? Above all, will it begin to negotiate a treaty for the verifiable, worldwide elimination of nuclear weapons? We shall see.

In the meantime, people interested in removing the dangers posed by over 17,000 nuclear weapons around the globe might want to press the administration to honor its commitment to seek a nuclear-free world.