The 1905 "Bloody Sunday" Showdown in Russia 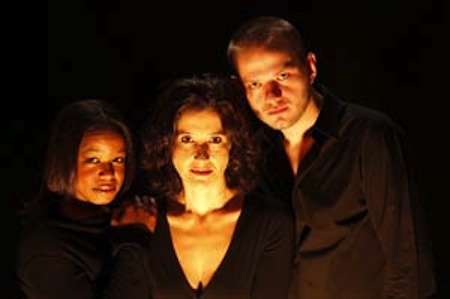 If you can sit through the dreadfully dull and dreary first thirty minutes of Neva, Chilean writer Guillermo Calderon’s drama about the January 22, 1905 massacre that later brought about the 1905 revolution in Russia, you will see a pretty good play.

The start of the short play, which opened last week, finds two actors in St. Petersburg greeting their new acting company colleague, Olga Knipper, the widow of recently buried Russian writing great Anton Chekhov. She has come to the jewel of Russia to re-start her acting career. The trio talks about the work they are doing and it is casually mentioned that the tsar’s troops have shot down several thousand street protestors, killing about a thousand of them, in another part of town. No one pays much attention and the play rehearsal drones on, endlessly. There does not seem to be any point to it beyond reminding people that Chekhov’s wife had talent, too.

Then, suddenly, for no real reason, Aleko, the male actor, bursts into a description of the mass shooting on the freezing, snow covered streets along the Neva River in St. Petersburg, that runs in front of the tsarist Winter Palace. He tells the acting pair how a local priest, Father Georgy Gapon, organized a demonstration of factory and mill workers that at first was simply a march to deliver a petition to Tsar Nicholas II, who was not even in the Winter Palace, the goal of the marchers. They came close to the palace and were ordered to disperse by guards in different streets, who fired warning shots into the sky. The crowd did not retreat. The soldiers then fired into the crowd and started a massacre.

In the theater, Olga and her comrades stop rehearsing their play to talk about the murders and speculate on what will happen next. There might be a revolution, the male actor says. How would they affect him, he muses. So do the others.

From that point on, Neva is a pretty good play, even though while it is big on character it is small on plot. Nothing really happens. The strength of the play is Calderon’s ability to show his actors, men and women, as Russians who love their country and really just want peace and a better life, but know that cannot happen under Nicholas II, a weak and unskilled leader. They want romance and marriage and jobs and good art and while hoping for the nest, have to fear the worst.

Knipper tells the audience a lot about Chekhov in his last year, when he was dying of tuberculosis at a German sanitarium, but not much about his work. She has come to St. Petersburg to revive her career because, deep inside, she thinks she has lost her talent. Bianco Amato is a wonderful Olga Knipper, full of love, nostalgia and fear, sometimes all at the same time. She jokes to Aleko, played well by Luke Robertson, that they should get married.

The play is stolen in its last moments by Masha (Quincy Tyler Bernstine), who delivers a barnburner monologue that scorches the tsar and his government and praises the coming revolution, and all the brave men and women ready to fight in it, many killed that morning. Her cry is the cry of all revolutionaries and, when you first hear it, you know that something is going to happen. And it Russia, it certainly did.

The wonder of Neva is that in just 90 minutes, you learn a great deal about the 1905 Bloody Sunday, the early days of unrest and the general hatred of the people for the Tsar, married to a German woman who was mistrusted by the Russians. Tsar Nicholas, fighting a very costly war against Japan at the time, had little connection to the people and whatever ties he did have would slip away pretty quickly over the next decade.

‘Bloody Sunday’ started an at first unsuccessful revolution to overthrow Nicholas II. One of his ministers was later assassinated and numerous protest marches and rallies were held. The Tsar, with his huge army and navy, had no fear of domestic strife, and put down the rebellion rather easily in 1905.

The 1905 mini-revolution and ‘Bloody Sunday’ were just portents of things to come, though.