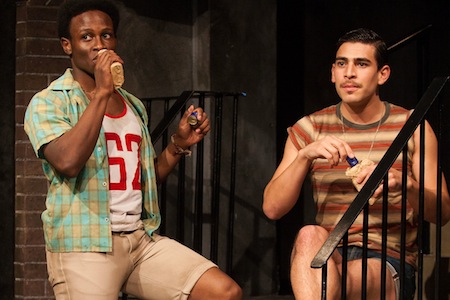 On the hot, humid evening of June 27, 1969, undercover police at the Stonewall Inn, a gay bar in New York City's Greenwich Village, alerted their superiors that it was ripe for a raid. Hours later, eight police officers arrived and plunged into the crowd of some two hundred men and women in the bar. The paddy wagons arrived late and those charged stood outside on the hot street. The revelers who had not been arrested came back to see what was going on as the tide of people grew. Neighbors and patrons at other bars, seeing the angry crowd, walked out on to the street, too, and joined it. Shouts and threats were yelled, the people spilled into the busy street and traffic was jammed for blocks. When the police vans finally did arrive, a full scale riot broke out. Gay men threw empty garbage cans at the cops and the police responded by clubbing dozens. Blood flowed. The riots over the Stonewall raid continued for several days. They were highly publicized and the event was said to be one of the places where the American gay rights movement started.

Hit the Wall, a new play by Ike Holter, is the story of that night. The play, long on drama and short on history, is a murky, muddled attempt to present what was a rather powerful story. The first half of the play features two wonderful characters, Tano and Mika, who have made a park near Stonewall (a bar that was, ironically, owned by the Mafia) their home away from home. The two gay men and a transvestite, Carson, stage wonderful little vignettes that outline gay life in New York the late 1960s. Their activity has nothing to do with the story of Stonewall, though, and you wonder when the real play will start.

The drama gets going with the actual police raid. Cops burst into the overcrowded club, flashlights and attitude both on, and started the arrests. There were scuffles, screaming, drawn guns and much cursing. For about a half-hour the play just soars, really soars. When the raid ends, though, the play floats down to earth, hard, and the last half-hour is as listless as the opening moments.

There are some well-drawn characters in the play, such as Peg, a woman who wants to be a man, and several gay men. There are terrible characters, too, such as a brutish Wall Street type whose rough, romantic style would not attract a harem of fleas. There are simplistic scenes, too. Madeline, who lives in the neighborhood and who turns out to be Peg’s sister, tries to get Peg to be a girl again and come home to bake cookies. It was an insult to the audience.

The director, Eric Hoff, mounted a play that at times explodes. The hall was turned into a theater in the round, with a minimal set, so everybody is close to the action. The in-the-round idea hurts the overall production, though, because people merely run on and off the stage. There is little backdrop, other than a park bench and a staircase, where the play can flourish.

What playwright Holter needed to do was keep the action focused on the raid and, at the end, let people know what happened in those next few days and how it galvanized the gay rights movement. He did not. Stonewall winds up being a reasonably interesting play with fine performances, but a play that could have been sharper.

It could also have used a lot more history. At times, police tell the audience that no one knew what actually happened that night. They did know. What happened was a parade of misunderstandings and miscues that needed to be explained. Someone, too, at some point, should have outlined the problems gays had in New York in that era, and around the country. At the end, some note should have been made, too, about how far gay rights have advanced. This week the U.S. Supreme Court is hearing arguments on gay marriages and in the fall a lesbian may be elected mayor of New York. Stonewall helped to start all that and this play does not spotlight it.

Hoff got marvelous performances from Gregory Haney and Arturo Soria as the funny. Energetic and eternally optimistic Mika and Tano. Nathan Lee Graham was devastating as transvestite Carson.