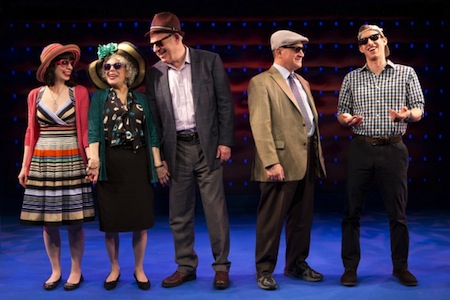 Many of the top comedians performing there -- not to mention most of the audience -- were Jewish (hence the name, as most New York Jews came from eastern Europe). The highlight of these comic routines were well plotted and perfectly timed stories about Jewish, and urban, life in America.

Now the whole country gets a chance to hear the old stories that rattled the funny bones of Americans for generation in Old Jews Telling Jokes, an hilarious historic review of the old stories that just opened at New York’s Westside Theater. It is one of the funniest shows to debut in New York in decades.

The six performers break down the comic pieces into solo stories, two person bits and ensemble jokes. They are again broken down into themes, such as “Sex before Marriage” and “Assimilation.” Some of the stories are old ones that have been respun generation after generation, but many are new to the ear.

The jokes are not just for Jewish people or about just them. They are classic examples of American humor and have brought belly laughs everywhere for generations.

None of the sex stories are graphic, but they are funny. Example: husband comes home to find his wife in bed with another man. “My God! I have to, but you, Murray?” A woman is asked why Jewish mothers don’t drink? She says “They don’t want to dull the pain.”

Other bits: “They’re going to sell a talking doll of my mother,” says a girl. “You pull the string and it says ‘again with the string?’”

One hardware store puts up a billboard of Jesus on the cross with the wordage “They Should Have Used Levinson’s Nails.”

Jewish mother and her daughter meet a man who was just released after eighteen years in prison. She asks him what he was in jail for. He says he killed his wife. The other hesitates, looks at her daughter, then looks back at him and smiles, “So, you’re single!”

A wife is told by a doctor privately that if she doesn’t give her husband oral sex he will die. She leaves the doctor and the husband asked her what he said. “Oh,” she wails, “He said you’re going to die!”

There is a video of an uproarious 1960s Alan King nightclub routine in which he has women in the audience read newspaper obituaries of men who died, all outlived by their wives. One was about a woman who jumped out the window, landed on her husband and killed him.

The jokes do not lampoon Jews; rather, they reflect the funny, farcical, and at times exasperating sides of American life. There are older actors and younger ones who work together to show that the humor remains multigenerational and lives on.

The Catskills were the foundation of American Jewish humor, and all of the press stories about the show have underlined that, yet there is no mention of the Borscht Belt in the stories. There should have been. Someone at the start of the show should have just told the audience a little about the Catskills and the type of stories that grew out of those night spots in the hotels. They could have done a slide show with photos of the old hotels and comics who worked there in the 1950s and ‘60s, or even explictly set the show at a Borscht Belt hotel. It would have given the evening a nicer historic look. There is a point in the play when an actor says that these stories are all about the past but are still funny today, but that is not enough.

The Catskills’ business died when the jet airplane was invented and Florida began its tourist boom in the early 1960s. They hung on, hoping for casino gambling, but that did not arrive fast enough. Now almost all of those hotels are gone. The Catskills have become genuine and important history, though. Brown University even sponsors a Catskills Institute with a web page that anyone can use to trace the history of the hotels (and the comics).

And now, thankfully, the Catskills, and all of us, have Old Jews Telling Jokes.

You’re depressed about something? See this play.