No, Sen. Graham, Domestic Drones are NOT a Good Idea

Daniel Martin Varisco is professor of anthropology at Hofstra University. 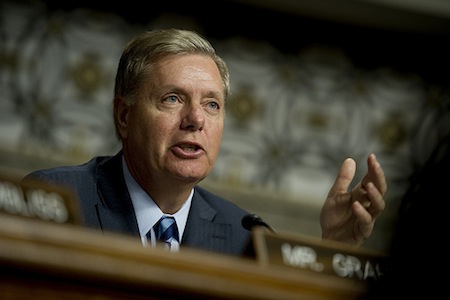 If George Orwell had lived to see how 1984 plays out in 2013, he would no doubt shake his head, marveling at how a novel he published in 1949 could come so close to reality. Senator Lindsay Graham, a South Carolina Republican (who may not gulp down Tea Party rhetoric but surely likes to sip some of its poison), was interviewed yesterday in the Washington Post before the second suspect in the Boston Marathon bombing was caught. His intent, as reported in the article, seemed more to downgrade the libertarian Rand Paul than to offer any kind of constructive comment on the unfolding tragedy of the bombing.

In his Senate filibuster, Senator Paul had argued that America is not a battlefield, so Graham used his senatorial perch to argue “It’s a battlefield because the terrorists think it is.”

When exactly did a terrorist act, not an attack from another country or an armed insurrection from within, define what a “battlefield” is? Yorktown was a battlefield in 1781; Gettysburg in 1863; Normandy in 1944. If the sadistic setting of bombs targeted at civilians proves that America is a battlefield, then what about Waco in 1993 or Oklahoma City in 1995 or even the hijackings that led to the destruction of the Twin Towers in 2001? When a battle is fought in war there are battlefields stained with the blood of combatants and often civilians as well; when a terrorist detonates a bomb it is a criminal act no less than when a disturbed 20-year old walks into an elementary school in Newtown, Connecticut and shoots 20 children and 6 adults, after having killed his own mother. If every act of violence defines a battlefield, there can be no peace anywhere.

Of course, if America is a battlefield, then why not open up the armories and distribute AK-47s to everybody, arm every teacher with a concealed weapon, set up checkpoints at every state border and even suspend the Constitution (except for the Second Amendment, which is the most sacred American right) and put the nation under martial law? Isn’t that the best way to win on a battlefield: outgun the enemy and damn the judicial process? After all, if America is a battlefield because a terrorist thinks it is, then a suspected terrorist by the same logic must be a terrorist because the government says he (or she) is.

But Graham goes beyond the battlefield to a comment that is even more alarming. “It sure would be nice to have a drone up there...” he says. The article adds in parenthesis that he was talking about a drone for surveillance and not for killing the terrorist. How parenthetical such a remark is I leave up to the reader. Surely Senator Graham knows that when most people hear the word “drone” they tend to think about the use of drones to kill suspected terrorists in the so-called “War on Terror,” especially in Pakistan and Yemen. I suppose if someone accepts the twisted logic that “guns don’t kill people, people kill people,” drones are as good as guns. And if drones don’t kill people, then why not use them for law enforcement?

But even if Senator Graham is only referring to drones that spy on people, Big Brother just got a hell of a boost. We have all kinds of surveillance today. Indeed, the two bombers in the Boston case were found because they were filmed outside a department store and the second bomber was confirmed to be held up in a boat because a police helicopter used a sophisticated infrared camera. So why not throw a bone to the arms manufacturers and rev up the drone-building industry? Forget “a chicken in every pot” and let’s create a society with a drone in every neighborhood. And while the government is at it, how about a monitor in every car that automatically notifies the police if a driver breaks the speed limit? Or, even better, a computer chip (preferably not with the number 666 on it) that can record every time a politician commits adultery?

I’m sorry, Senator Graham, but there are some things a lot nicer than a drone tracking what everyone is doing to find the occasional terrorist. Perhaps we could go beyond our thirst for revenge to better understand why individuals do terrible things. The devil may indeed be in the details, even if you think the details all point to a real Devil that literally takes over our unsaved souls. I am not talking about justifying any act of terrorism, nor allowing a terrorist to escape justice for a criminal act. But in theory the United States has more than one amendment and a crucial check on the excess of power remains our judicial system, flawed as it sometimes is. Even when a person is caught red-handed or confesses a horrible crime, it should not be an American value to simply throw the rope up over the nearest tree and string up the guilty person without a trial.

Graham’s comment is a poignant reminder of what is terribly wrong about our current political stalemate in Washington. Instead of thinking about what would be nice up there, how about what would be nice down here where we live. How about his vote against background checks at gun shows and over the internet, which Graham voted against? In order to protect the right of someone to advertise sale of a gun in a church bulletin (one of his stated reasons for opposing the bill, although in fact it is inaccurate), Graham chose to leave in place the current system where a convicted felon or a mentally ill person or a terrorist can get almost any kind of weapon with a credit card and a click of a mouse. It would be nice to have a senator up there in congress who goes beyond droning rightwing blather to get re-elected and searches within for a conscience that follows the will of 90 percent of the American public.