A Loving Trip Back to a Different America 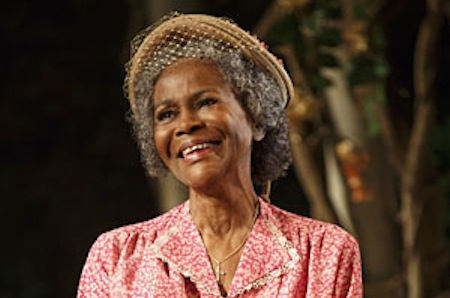 How many of us would like to take a trip to our own historic Bountiful, the town where we grew up and raised our children, but a town that has, over the years, receded far into our memory?

That’s what aging Carrie Watts wants to do in Horton Foote’s sixty-year-old story about 1947 Texas, The Trip to Bountiful, a charming, splendid play about a woman in one era in Texas history returning to another.

Carrie, a delightful old woman, lives with her last child, middle-aged Ludie, and his pushy wife, Jessie Mae, in a cramped two-room apartment in Houston. She yearns to return to the town near the Gulf of Mexico where she grew up, Bountiful, a place she has not seen in more than twenty years. She just wants to go back for a visit and tour the streets that she loved as a child and young woman.

She needs a break, too, from her life, which she fears is rolling towards its conclusion. Her son is stuck in a crummy job. Her daughter-in-law, Jessie Mae, is petty and unpleasant. The couple has no children and probably never will. They only have Carrie, whom she feels they see as a burden.

Then Carrie bolts, back to Bountiful and another era of Texas history.

Where is it, though? Is her Texas of the actual village of Bountiful, or is it in her luscious memories of time, place and the people she treasured?

She does get to Bountiful, in an odd way, but it is not exactly the Bountiful she remembered. Still, as she walks through the overgrown grass on the lawn and sighs, it is, for her, the Bountiful of old. It is, indeed, all of our own best memories, which time and history cannot savage

Carrie is played with richness and bravado by Cecily Tyson, just nominated for a Tony Award for an unforgettable performance. She is everyone’s favorite grandma in the show but, in a deeper way, she is a stand-in for everybody, all looking back on happier times.

Vanessa Williams, showing a lot of her bitchiness from her role in the television series Ugly Betty, is a whirlwind as Jessie Mae, the bossy, talkative wife of Ludie. She understands that they will be childless and that Ludie will probably never go anywhere in his job, but she loves him nonetheless. Cuba Gooding Jr., is a marvelous Ludie, who loves his wife and his mother and constantly plays referee between them.

The three co-exist when the play opens and continue to do so when it ends. It is a shaky alliance they have, but a good one.

Michael Wilson has directed the play with a soft and slow hand, drawing out every inch of emotion from the characters. He also gets fine performances from Condola Rashad as Thelma, Tom Wopat as a local sheriff, and Devon Abner, Curtis Billings and Arthur French.

Historians can take some mild shots at Foote’s play. There is no racism in this play about this trio of African Americans in the South in 1947 (the original stage cast and movie cast were mostly white), although there is a "colored only" sign near a telephone in the bus depot. There is little about black neighborhoods or discriminatory labor practices (why is Ludie really never promoted?) These are trivial historic oversights in a dazzling and beloved play, an American classic, which stars Tyson, one of America’s great actresses in a trip back through time.