Who are You Calling Nancy Boy? 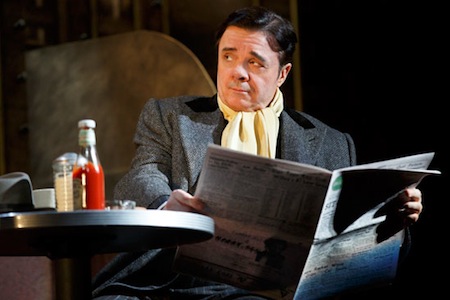 The ‘nance,’ or Nancy Boy, was a gay burlesque character from the 1930s who brought guffaws and belly laughs as he pranced about the stage, creating campy scenes and sketches of gay life. He put on an outrageous show and audiences loved him. In the late 1930s, New York Mayor Fiorello LaGuardia, fearful of how the lurid burlesque shows would make his city look in the upcoming World’s Fair of 1939, cracked down on the houses.

Part of LaGuardia’s anger was aimed at the Nance, whom critics said created audiences of lusty gay men having sex in the dark balconies of the burlesque emporiums. It was an outrage, the Mayor said, and police began swooping down on burlesque shows, closing many and forcing others to drop the nance act or greatly curb it.

The Nance, that just opened in New York, is the very funny, deeply emotional, and winning, story about that crackdown.

The play stars the marvelously gifted Broadway veteran Nathan Lane as Chauncey Miles, a veteran Nance who worked at the Irving Place theater (an actual theater in the ‘20s where burlesque shows were staged and nances worked). He is set in his life on stage and off stage as a homosexual who prowls clubs, parks, and even Horn and Hardart cafeterias for men. One night he meets Ned, a married man from Buffalo, and falls in love with him. The plays tell dual story of their love, and problems, and the fate of Chauncey’s burlesque show. It is a poignant look at gay life in the Depression.

The bouncy, sometimes charming and sometimes angry Chauncey is the centerpiece of the play. He is hilarious in his stage bits in the burlesque show, cavorting through a sequence of scenes with Ned and others in the act. Lane plays him well, making Chauncey a campy, over the top, larger than life character in the burlesque show and a troubled, unhappy man in his apartment at home. Lane is splendid as Chauncey (he was just nominated for a Tony award). You laugh with him and cry with him and, every minute of the play, wonder what is going to happen to him and everybody else in the burlesque theater. The tide of history is weeping towards them, but where will it take them?

Ned loves Chauncey because he has nowhere to stay and falls for him. Chauncey remains the same in the play, but Ned grows dramatically. He is a naïve country oaf at the start, but a tender and mature man at the end. He sees where the crackdown is going to smother Burlesque, but Chauncey never does. He grows, and Chauncey stagnates.

Douglas Carter Beane has written a very simply plotted story that director Jack O’Brien makes work in a direct and seamless fashion, but it is Beane’s rich characters, from the gay men to the strippers and comics in the show, which make The Nance so likable. You are constantly reminded throughout the play how difficult it was to be gay in the 1930s, whether in New York or anywhere else. Gay men and women lived secret lives in a shadowy world. It was painful, and this play focuses on that. It was also a world with a lot of love and laugher, and he play focuses on that, too.

Audiences get a lot of history in The Nance as the story of Depression burlesque is outlined. Beane did extensive research on the Mayor’s crackdown and how police screened plays first, took notes and then raided them. The play shines a spotlight on New York police history and how the court system worked (presented in high comedy here).

The play takes place on a superb, huge turntable set, with Chauncey’s apartment, the theater’s stage, the backstage and the Horn and Hardart (remember them?) as different sets. The sets, by John Lee Beatty, provide an authentic look at burlesque houses and Greenwich Village apartments of the 1930s era.

Director O’Brien gets fine work from Orsini and Lane, but also from Lewis Stadlen as comic Efram, and Cady Huffman Jenni Barber and Andrea Burns as strippers.

The Nance is a very funny show and a somber look at gay life at the height of the Depression.