Oliver Bullough is Caucasus editor for the Institute for War and Peace Reporting and author of Let Our Fame Be Great, which won the Overseas Press Club Cornelius Ryan Award. He lives in London. 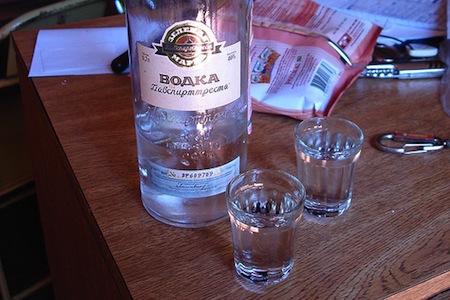 In early 2000, I took my first Russian overnight train. It was only from St. Petersburg to Moscow, so it was hardly one of the country’s epic journeys. But I did indulge in one of the other pastimes that Russia is famous for -- and got drunk.

An old woman in my compartment provided the alcohol, which was moonshine from a two-litre bottle and served in a blue plastic cup. I passed out somewhere in the middle of the second but my seven fellow passengers were still drinking when I came to in the morning.

For a young traveller, it was wonderful. It felt like the eternal Russia -- the generosity of strangers, the abundance of strong liquor, the forest outside the window. Via alcohol, I felt like I had been given the kind of experience other visitors have been enjoying for centuries. After all, the first mention of Russians in all history is when Prince Vladimir of Kiev rejected Islam at the turn of the first millennium because “drinking is the delight of the Russians, nor can we live without it”.

But the Russian love affair with vodka is not all delightful. The national addiction is so strong that few officials have ever dared try to wrest them away from the bottle before it kills them. In tsarist times, the government relied on vodka both to control and to raise revenue from their restive population and, at first, the Bolsheviks tried to ban it. It was, they said, incompatible with the dream of building a free and just society.

It was a decision that lasted less than a decade. In 1925, at the Party Congress, they declared that they too needed the revenue provided by a monopoly on vodka. Joseph Stalin told his comrades they would have to choose between selling vodka and “slavery to Western European capitalists.” By 1940, more shops in Moscow sold vodka than meat, fruit and vegetables put together, and that was before consumption really took off.

Between 1960 and 1979, alcohol sales quadrupled. Up to a fifth of disposable income went on drink, and the government earned more from its alcohol monopoly than from income tax. Mikhail Gorbachev, the general secretary who came to power in 1985, calculated that the country had seen no economic growth at all in the previous two decades if you excluded alcohol sales and energy exports.

This put Gorbachev in a difficult position. Alcohol was one of the country’s few successful industries, yet it was also destroying the population. The costs associated with alcohol consumption were four times higher than the revenues earned from the monopoly, according to a Soviet report from the early 1980s.

Put like that, there was only one course open to a good Bolshevik, and so Gorbachev severely restricted alcohol. He raised the drinking age to twenty-one, banned sales of strong alcohol before 2:00pm, increased prices by 50 percent, and barred sales near factories, hospitals and other places plagued by drunkenness. His government also launched a sobriety campaign.

And the effect was astonishing. Sales fell by 50 percent between 1984 and 1988 in a campaign that saved, according to one recent study, 1.61 million lives -- 400,000 people a year. Life expectancy, which had been falling since 1964, bounced up to an all-time high of almost seventy years. A baby boom filled the country’s kindergartens, and also filled part of a population hole caused by a period of below-replacement fertility coinciding with the mammoth drinking binge.

As a health intervention it was a triumph, but as a piece of politics it was a disaster.

“Now that the world business cycle has changed and energy prices have fallen and we have been compelled to cut down the production and sale of wine and vodka to safeguard the social health of our population, the economy of our country is faced with a most serious financial problem,” Gorbachev said in February 1988.

Officials had been unable to provide consumer goods to replace the alcohol, and had been reduced to selling the population bonds to mop up the cash -- something hardly guaranteed to inspire delight among Russians who had never been consulted on the matter in the first place.

“I always hated drunkenness. But suddenly it seems that no one celebrates holidays any more. We used to make ourselves new dresses for the festivities. This year I didn’t feel like making a single dress. Why bother?” asked a woman in Minsk in a letter to a local paper.

Sugar sales rocketed as enterprising citizens evaded the law by making their own hooch, thus transferring money into the criminal economy and further weakening the state. Gorbachev’s relaxation of limits on public debate, and the long queues for alcohol, gave ample opportunity for citizens to discuss the shortcomings of Soviet life.

It was Moscow’s last of many bids to solve its country’s problems by decree and, like all the others, it failed. It became symbolic of Gorbachev’s out of touch elitism -- something then contrasted with the down-to-earth qualities of Boris Yeltsin, who liked a drink. By 1988, Gorbachev relaxed his campaign, the factories re-opened, and life expectancy and the birth rate plunged once more.

The health consequences of that decision were disastrous. In the last sixteen years of communism, 36 million Russians were born and 24.6 million died. In the first sixteen years of capitalism, those figures were reversed: 22.3 million Russians were born and 34.7 million died. And it set the Russian nation on an apparently irreversible downwards course. The United Nations estimates that Russia will lose almost as many people as are in the whole of Canada by the middle of this century.

And of course, the country fell apart. Gorbachev’s cure killed his patient. I have got drunk on trains many times since then but, knowing Russia better now than I did then, I struggle to see the romantic side.