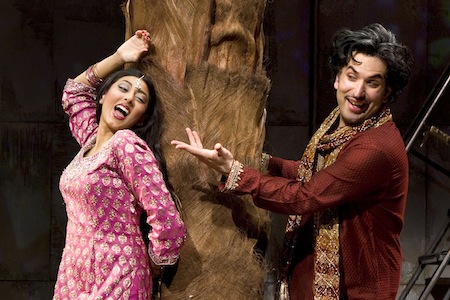 Business is grim for Bunty Berman Productions in Bombay. His latest 1950s Bollywood film was a colossal flop, nine of his other movies cannot be completed because he is nearly bankrupt, his longtime star is getting old and overweight and the critics are ready to bury him.

Does Bunty, a huge figure in Indian cinema, give up? No. Singing and dancing, he and his Bollywood friends assure all that they will, as their song goes, “make a movie” and win back the hearts in Indian filmgoers.

Bunty Berman Presents is that story. The new play by British Pakistani writer Ayub Khan Din, author of Rafta, Rafta, starts off slowly, but after half an hour or so becomes a charming musical that not only pleases the audience, but gives them lot of history about Indian cinema, which has grown in America in the last decade or so.

The strength of the play is its resemblance to every 1930s and 1940s American/Hollywood musical ever produced. The plot is pretty much the same, the characterizations similar, the use of old time film footage similar and the old Andy Hardy let’s-do-a-show appeal just as effervescent. It has a few wonderful songs, such as the aforementioned “Let’s Make a Movie,” some fine performances by Din himself as Bunty and Sorab Wadia as long-in-the-tooth matinee idol Raj Dhawan and Indian film’s standard scenes in which, for no discernible reason, everybody breaks into song and dance.

Will the studio be saved? Can Bunty change in Bollywood’s Golden Age of film in the ‘50s and come up with new ideas? Can Raj stay on top? Can Bunty’s new ingénues replace his old ones? Can he get the money to pay his bills?

In a wonderful collage of black and white film footage, the audience gets a look at Indian films from the silent era to the early 1960s. It was a tumultuous time in India as the country was buffeted by the Great Depression, World War II and then the stormy independence movement. To take people’s minds off the headlines, Bollywood (the B for Bombay replaced the H in Holly) produced a long line of escapist romance films full of song and dance. The 1940 to 1960 era is still considered the Golden Age in Indian cinema. There is a lot of that history in Bunty Berman.

It is the old Hollywood ‘30s musical, but there is one big difference, and that is what makes Bunty Berman an historical winner – 1950s organized crime.

No one will give Bunty money, but a gangster will. One of India’s most powerful mob bosses Shankar Dass, has a son, a rather despicable offspring, whom he wants to make a movie star. He tells Bunty he will back all of his movies if he gives his son top billing in one. The historical note here is that there have been persistent reports that organized crime has made money off Bollywood films for years, either in direct investments or money laundering. In 2011, as part of the Wikileaks scandal, a cable from a state department official in India said that Indian film companies had been financed with underworld cash. One of the reasons for that was that for decades, Indian banking and investment laws made it difficult for film studios to attract government and corporate money, driving producers to seek private funds, often provided by gangsters or organized crime controlled legitimate businesses.

As a result, over the years, organized crime lords influenced Bollywood, public officials charged. In 2002, Time Magazine reported that Abu Salem, a reported organized crime figure, boasted to journalists that he had been an investor in one of the biggest successes in Indian film history, Devdas, His wife is a former Bollywood film star. They named their sons after their favorite actors

Some actors appeared at organized crime parties and crime lords boasted of their friendships with performers and directors. Several actors have been kidnapped, and later released, by organized crime families.

In 2001, film producer Nazim Rizvi and his assistant were sentenced to six years in prison for associating with organized crime figures and extorting money from a number of film personalities. Actor Sanjay Dutt was sent to prison earlier this year for his role in the 1993 Mumbai terrorist bombings. India has changed its laws to make financing of movies easier, but organized crime reportedly may still involved with Bollywood, as hinted at by Din in his play.

You can’t take your eyes off the mob boss or Bunty as the play rolls towards its conclusion. Director Scott Elliott has done a fine job, despite a bumpy beginning, of telling a good 1950s story and getting a slice of gangland history on to the stage. In addition to Din and Wadia, he gets fine performances from Nick Choksi, Katie Chung, Raja Burrows, Lyn Philistine, Shoba Narayanan, Sevan Greene, Lipica Shah, Andrew Ramcharan Guilarte, Alok Tewari and Debargo Sanyal. The musical numbers, by Din and Paul Bogaev are enchanting and Josh Prince’s choreography is sharp.