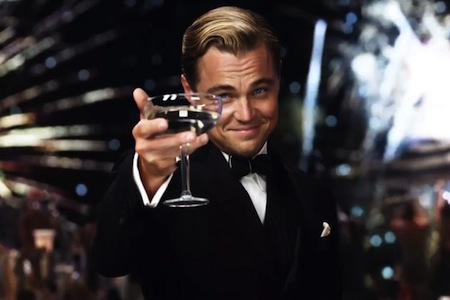 F. Scott Fitzgerald’s novel The Great Gatsby is a wafer thin book about the 1920s Jazz Age, long lost love and the intrepid chase of the American dream. It is considered the best novel ever written by an American not because of what it says, but because of what it implies. A hundred stories drift lazily between the pages, and over the water from Gatsby’s swimming pool to the green light on Daisy’s dock.

In Baz Luhrmann’s new movie The Great Gatsby, the sixth film retelling of Fitzgerald’s tale, the story is inflated and expanded, as if it were based on a 700 page Herman Melville work. Everything you wondered about the story and characters is spelled out and everything you wanted said is spoken. Luhrmann and screenwriter Craig Pearce left no stone unturned, and no glass of champagne from one of Gatsby’s wild parties unfinished in the new Roaring Twenties epic.

The story is simple. Jay Gatsby loved Daisy Buchanan but left her to fight in World War I and vanished for five years. He met a rich man who turned him into a glamour boy. Later, he became a rather brassy bootlegger and the head of a stock fraud ring in New York that made millions. Daisy married a rich man. Gatsby bought a mansion across the bay from Daisy’s colossal home and lived the high life. Hosting numerous parties and racing about in an expensive, bright yellow Duesenberg sports car. He had a plan to win Daisy back; that is the story.

In the film, as in the novel, Gatsby is seen as incredibly naïve as he tries to bring back his past with old flame Daisy. She was naïve too, but at the very end of the film she realized that she was better off with the devil she knew. Tom, then the devil she turned out not to have really known at all, Gatsby.

The result is a lavish, splendid, elegant, bombastic story about the twenties that simply soars. Most importantly, for history’s sake, a director has finally shown Gatsby as the gangster he was, and clearly defined in Fitzgerald’ book. Gatsby’s gangland background is shown again and again, and not just in the Meyer Wolfsheim sequence. Crime is how he got his money and nobody cared.

Historically and culturally, the average person in the 1920s was fascinated by the gangster; they still are. The mobsters of that era, with their fine clothes and machine guns, represented the achievement of the American dream, but in the wrong way. People wanted to be with them, until the bullets flew. They were celebrities. Gatsby is a celebrity in this movie. Did he kill a man, as all whisper at his parties? Probably.

In the book, and in the 1974 movie starring Robert Redford Mia Farrow, Daisy is a brainless, vapid doll and you wondered why Gatsby, or anyone, would be interested in her. Here the brainy Carey Mulligan is much better, turning Daisy into a very beautiful and much deeper woman. Joel Edgerton is good as Tom Buchanan, the rich, womanizing, polo playing and boorish, brutal husband who terrifies his wife. Elizabeth Debicki is a cool and winsome Jordan Baker (not seen as a golf cheat here as she was in the Redford version). As always, Nick Carraway (played brilliantly by Tobey Maguire), the narrator, steals the movie.

The music of Jay Z, even the silly rappers riding in a convertible across the 59th Street Bridge, is way out of synch with the ‘20s story, but, in the long run, it fits because Gatsby is a timeless story (here we are watching it ninety years after it was written). Gatsby’s huge mansion and grounds are outlandish, but fit the oversized story of this oversized man and his oversized life.

There are some problems with the movie. It is a good twenty or thirty minutes too long. Leonardo DeCaprio is a tentative and uncertain Gatsby (as has been every actor whoever played the role), the splendiferous sets are too much and well over the cinematic top and the American dream theme of the movie does not play out until the very end. There is also not much here historically about the Roaring Twenties beyond the champagne lives of the rich, poor old Wilson the mechanic and some black and white old film footage. As a history tale, it needs more about the real lives of Americans.

If you never read the book (at most high schools, everybody has to read Gatsby and Macbeth), you’ll see the film as big and juicy and pleasing. If you have read the book, and seen the Redford film, you’ll appreciate the filling in of the story and the gigantic. glitzy sprawl of the tale.

You can’t miss The Great Gatsby, now can you? They have out Gatsby clothes, Gatsby jewelry, a new movie cover for Gatsby paperbacks and more publicity than Franklin Roosevelt received at his 1932 Inauguration.

The Great Gatsby is not a great movie (the story is too complex for that), but it is a very good one. If you miss it, don’t worry. In five or ten years there will be yet another version. Americans are as stuck on Gatsby as he was on Daisy.