Catherine Cocks received her PhD in cultural history from the University of California, Davis. Her most recent book is "Tropical Whites: The Rise of the Tourist South in the Americas." 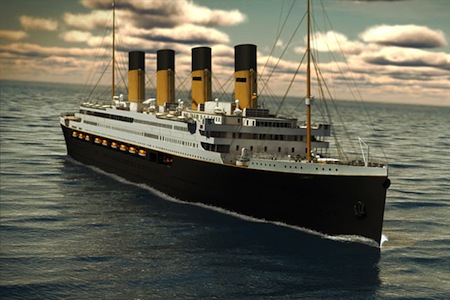 Australian businessman Clive Palmer is planning to build a replica of the Titanic -- bigger and more stable, driven by diesel instead of coal, and with vastly better communications equipment, but still, the most famous ship ever to sink afloat once again. According to Wikipedia, he’s just the latest to see the public infatuation with the doomed luxury liner as a business opportunity (or maybe just a publicity stunt -- opinions vary). James Cameron’s 1997 film is only one of a long list (for example, this one) of films and TV shows about it. What is it about this particular maritime disaster that inspires such fascination? Perhaps it’s that the Titanic so perfectly embodies the height of pre-World War I luxury, burnished by age and even more by technological obsolescence -- its brand of excess seems exotic now, when anyone who simply needs to get from one side of the ocean to the other is going to fly.

Appropriately enough, the contemporary incarnation of the high-end passenger steamers of the past, the pleasure cruise, was developed in large part to offset the huge construction and fuel costs of transatlantic liners like the Titanic. To recoup their investments, the passenger steamship lines had to keep their ships in service and earning revenue constantly. Unfortunately, the transatlantic crossing, then the most heavily traveled and lucrative in the world, operated mostly in summer, when the weather was bearable. To stay profitable, companies needed to give wealthy travelers a reason to sail in winter. One result was the Caribbean cruise. Contrary to the usual story (told ably by Kristoffer A. Garin in Devils on the Deep Blue Sea), the industry did not first emerge in the 1970s. It was already big business in 1912, when the Titanic went down.

In researching my book, Tropical Whites: The Rise of the Tourist South in the Americas, the earliest evidence I found for Caribbean cruises was an 1879 flyer for winter tours on the Quebec & Gulf Ports Steamship Company. In the following decade, the Quebec Steamship Line published more substantial brochures for trips to Bermuda. These journeys both placed tourists on board freighters, though -- passengers’ enjoyment was not the primary aim. The first genuine cruise in the region seems to have been launched in 1891 by the Florida-based hotel and railroad network known as the Plant System. By 1895 the Hamburg American Line began offering Caribbean cruises, and the British Royal Mail joined the field by 1905, the same year that the high-end U.S. tour company Raymond and Whitcomb first chartered a ship for this purpose. It seems very likely that other companies were also testing these waters around 1900.

Temporarily curtailed by the First World War, the Caribbean cruise industry got an unexpected boost in the 1920s when the United States sharply limited European immigration. Companies serving the transatlantic routes could no longer rely on millions of steerage passengers to keep their ships full and profitable. Cruises became increasingly important as a means of replacing the lost revenue. The war also catapulted U.S. citizens into the role of the world’s wealthiest and most willing travelers. For them, the Caribbean islands, then mainly European colonies or U.S. protectorates, were both attractively foreign and close to home. Taking advantage of the growing market, Holland America, Cunard (the Titanic’s owner), Swedish America, Hamburg American, North German Lloyd, and other European companies advertised Caribbean cruises regularly by the mid-1920s. The U.S.-based Grace, Panama Pacific, Panama Mail, and United Fruit Company lines also served the region. (The role of the banana industry in promoting Caribbean tourism is a fascinating and largely untold story.)

The cruise ships claimed to offer every possible luxury, of course -- as much if not more than the best transatlantic liners. But unlike the liners, cruises also offered exclusivity: there would be no steerage or even second-class passengers on a journey designed solely for pleasure. As United Fruit put it in one 1924 brochure, the passengers would be “diplomats and debutantes, captains of industry and congenial vacationists,” or less euphemistically, “the kind of traveler who wants the best and is willing to pay for it.” This exclusivity allowed the steamship lines to promise that a trip to the Caribbean would enhance “the rhythm of romance,” as the Panama Pacific wrote in the 1930s, without risking the kind of cross-class affair at the center of Titanic the 1997 film -- so attractive to moviegoers now, so appalling to wealthy parents then. (Why the Caribbean would be aphrodisiacal in the first place is a question I address in Tropical Whites.)

Aviation’s opening challenge to the steamships came in 1927, when Pan American Airlines flew the first regularly scheduled international passenger flight, from Key West to Havana. But while ships could carry hundreds of passengers, these early planes were tiny, holding ten to twelve passengers in the 1920s, thirty-six to forty by the late 1930s. The economic crisis of the 1930s was a far more serious problem, which steamship companies met by converting steerage into “tourist third class” and recruiting customers -- notably students, teachers, and professors -- who had the time to travel but could not afford first-class luxury. The spread of paid vacation time among U.S. workers also prompted the steamship lines to offer shorter cruises to meet the growing demand for one- and two-week journeys.

During World War II, submarine warfare and the conversion of passenger ships to wartime uses temporarily halted the growth of the Caribbean cruise industry. Nevertheless, its foundations had been laid and it would become increasingly important as steamship lines struggled to survive the rapid expansion of passenger air travel from the 1950s. In 2011 some 5,722,000 people cruised the Caribbean. Even without the opportunity to sail on a resurrected Titanic, they partake in luxuries inspired by those of the previous century’s transatlantic liners.