"Playboy of the Western World" Misses the Party 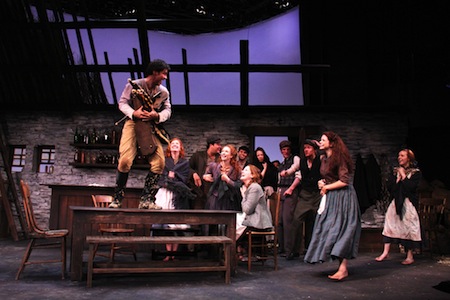 In the novel The Great Gatsby, partygoers at Jay Gatsby’s elegant mansion are thrilled to hear a rumor that Gatsby had killed a man. In their champagne drenched eyes, a killer was a hero.

In the play and movie Chicago, murderesses Roxie Hart and Velma Kelly are turned into singing, dancing heroines in the middle of the Roaring Twenties because they killed the men in their lives.

In Playboy of the Western World, by J.M. Synge, which just opened at the Shakespeare Theater of New Jersey, residents of a small village in Ireland in 1907 treat their odd visitor, young Christy Mahon, as a God when he announces with triumphal glee that he has just murdered his father. Men see him as an admirable character and women go crazy over him.

When Playboy opened, that theme did not work at all. Hundreds of people rioted at several theaters where the play was shown because they thought it disparaged the Irish. It not only made them out to be killer crazy idolaters, but murderous thugs who would hang people without an arrest or trial, too. It painted them in a very bad way at a time when Irish nationalists were trying to unite their people to gain independence from Great Britain.

The latest version of Playboy, in Madison, not only struggles against the weaknesses of the finger pointing script, but moves at such a sluggish and slow pace that Synge would have lost the race to both the tortoise and the hare.

The first twenty minutes of Playboy are dreadful. It is night in a tavern when our braggadocio killer arrives and becomes immersed in mindless conversation. The play does not get better until daylight bathes the stage. Another problem with the play is that all of the actors on stage adopt their Irish brogues so well, and use them with such spirit, that you can hardly understand what they are saying, especially in the first twenty minutes. The play sounds like a birthday party at a bar at a Dublin pub.

The plot is simple. Mahon finds that he is admired as a killer so he continually regales crowds with the story of how he slew his father, enhancing it each time he tells the tale. The more he recounts the story, the more famous he becomes. Then his murdered dad, very much alive, shows up.

You do learn much Irish history in Playboy, especially about public hangings. They were festive events at the time, with an atmosphere surrounding them much like today’s football game tailgate party. Thousands of Irish, and Americans on U.S. soil as well, would ride dozens of miles to see someone executed. The streets around the gallows were packed with vendors selling food, drink and clothing. Hotels were all sold out. There was a hanging procession, sermons by ministers, and choir singing. Some bodies were laid out at a pub after the hanging and locals paid a quarter or so to see the remains; hundreds waited on line to do so.

In Playboy, you learn much about turn of the century taverns, village life, the art of widows snaring a new husband and what little there was of law and order. A half dozen or so old Irish tunes are sung. There are a few merry romances.

Despite all of that, this is a troubled play that unfairly targets the Irish, then and now. Of course, there have always been examples of heroic status for criminals in the eyes of some. Remember Bonnie and Clyde, Butch Cassidy and the Sundance Kid, John Dillinger? For years, killers on death row have had letter romances with women who fell in love with them. Serial killer Ted Bundy was married in prison. Last week, the alleged murderer of Natalee Holloway in Aruba, married his pen pal in prison.

Over 100 years of stagings in dozens of countries, Playboy has become a bit of an international classic, however, although I do not see why.

The actors in this play do a fine job with a confusing script. Good work is turned in by Izzie Steele as Pegeen, the playboy’s girlfriend, Michael Newcomer as Christy Mahon, Emma O’Donnell as the wily widow Quinn and Edmond Genest as Mahon’s dad. Director Paul Mullins does a decent job of staging the play,