Very Far from Heaven in 1957 Connecticut 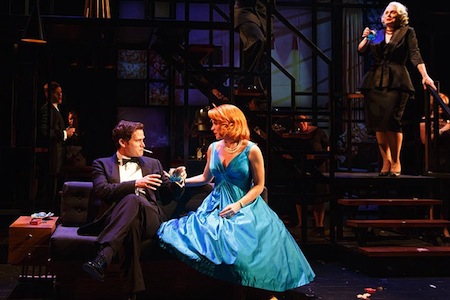 Fans of the 2002 movie Far from Heaven will flock to the play version of the story, which just opened at Playwrights Horizon in New York. This time the work is a stage musical, not a drama, but the play has much of the same punch as the movie. It is emotional, troubling story of the underbelly of life in quiet Connecticut, in 1957 America, just before the Civil Rights movement gained steam and long before the gay rights movement caught fire.

Far from Heaven, with a book by Richard Greenberg, is the story of a successful New York executive who lives in Hartford and has a beautiful and loving wife, a cute kid, a hard-working maid and lives in a big house. He is gay, though, and that wrecks his bucolic life in the 1950s suburbs as the autumn leaves tumble to the ground, not so gently, as the play opens. His wife, jolted by his homosexuality, finds herself attracted to her gardener, a black man with a small child. She is drawn to him and too naïve to realize what a stir that relationship will cause in white suburban America.

The play is strong, although less forceful than the film, but why they made a musical out of the movie is beyond me. The story, with music by Scott Frankel and lyrics by Michael Korie, opens with a wonderful song, Autumn in Connecticut, but after that every song sounds the same and the songs are more talk than tune. If the music was cut out, the drama would be sturdier.

Far from Heaven is a good play, but not a great play. Perhaps that is because everyone who saw the movie will compare the play to the film story and feel a bit disappointed. The movie had enormous power, especially with Julianne Moore as Cathy Whitaker, the heroine (wife) of the story and Dennis Quaid as her husband. Here, on stage, Kelli O’Hara is quite good but not anywhere near as impressive as Moore. Her surrounding cast is talented, too, but the sustained drama of the film, and its electricity, is missing.

The story is an historical winner, though, because audiences learn a great deal about 1957 America. There is the gorgeous O’Hara in her 1950s dresses, babbling on about parties, gallery shows and gabbing on the phone. There are dozens of photographs of 1950s neighborhoods flashed on the back wall of the stage. There is a mention of the 1957 race struggle in Arkansas and, again and again, conversations about how wonderful life is in that innocent era of American history.

The play, like the movie, is a jarring reminder that life in 1957 was full of problems, public and private, as was any decade in U.S. history, but they were, for the most part, covered up by historians. Why? The 1950s had the Korean War, the Cold War, the development of the hydrogen bomb, revolutions in several countries, such as Cuba, several mass killing sprees, a recession, the Hungarian Revolution, Sputnik, the Suez Canal dispute, the integration of American schools by the Supreme Court, widespread juvenile delinquency. the supremacy of the New York Yankees in baseball and the Boston Celtics in basketball, Liz Taylor and the successful climbing of Mount Everest. What more do you want?

What the play does, like the movie, scratch the underbelly of the decade to reveal sexual and racial prejudice and to warn audiences, continually, that people ignored these widespread conflicts to create a post card pretty picture of American life, as the play suggests. The 1950s? All Leave It to Beaver, right?

The play is a tough look at the real 1950s but it has some problems. The main problem with is the lack of memorable songs. Music in theater helps to tell the story, and it does here, but every song sounds the same, many obviously written to showcase Ms. O’Hara’s considerable talents.

The acting in Far from Heaven is quite good. O’Hara is superb, as always, as the pretty, pert, well-liked wife whose life is suddenly destroyed by her husband’s homosexuality. Steven Pasquale is solid as the husband, Isaiah Johnson is persuasive ad the black gardener, Cathy’s friends are all very prototypical suburban gossips and party mavens. As an ensemble, they are very convincing as 1957 America. There must a young Don Draper (Mad Men) walking the streets of that neighborhood somewhere.

Far from Heaven is a fine show, but it needs better music, more explosive drama and the scorching power that the movie had. It is far from average, but far from great, too.