The "Man of Steel" Rusts 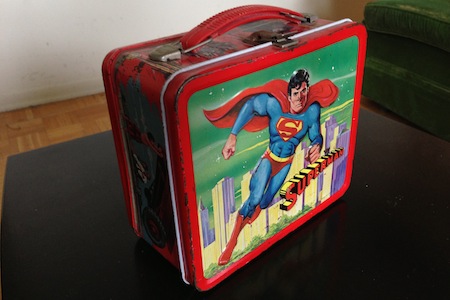 Superman is back in Man of Steel, the latest version of the story about the powerful hero from the planet Krypton who came to Earth to uphold truth, justice and the American way.

The movie, starring unknown Henry Cavill as the man who can leap tall buildings with a single bound, opened last week and earned an amazing $113 million in its first weekend, to the astonishment of show business experts.

This latest Superman saga sinks faster than a ton of steel. It is dreary, tedious and lacks any humor, heroism or camaraderie. Superman should fly back to his galaxy and leave crime fighting and planet saving to Batman.

The first twenty minutes of the movie tells the story of Superman’s parents on Krypton, Jor-El (played by Russell Crowe) and Lara, who souped up a rocket and sent their son Kal-El to earth just before Krypton blew up. This could have been done in a minute, as it was in previous Superman films. The baby lands in Kansas and then grows up unable to use his super powers because his father kept him under wraps. Here, in this film, he does not immediately wind up as a reporter at the Daily Planet in Metropolis, change clothes in a pay phone booth or, gad, does not even wear his traditional red pants. He winds up as a scraggly, bearded oil well rig savior (he rescues people on buses and other things, too). Then a bad guy from the old neighborhood in Krypton, General Zod, and his gang of evildoers arrive from the sky and demands that Superman be returned to them (they plan to kill him). The rest of this tiresome, stale two and a half hour long movie (it seems like five) is a futuristic car chase scenario in which Superman battles Zod (played with a heavy foot by Michael Shannon) and the Zodians to save Earth and Lois Lane (played by a sleep walking Amy Adams). Half the buildings in America are blown up in the fight.

The real tragedy of Man of Steel, lamely directed by Zack Snyder, is that there is absolutely no history in it, as there always was in Superman tales and comic books.

It is important to remember that Superman, red pants or not, is an historical figure. He is the textbook immigrant. Superman arrived in America from Krypton, about to be destroyed, via ship, just like most other immigrants (well, spaceship). He landed in the heart of American, Kansas, and was raised by a set of foster parents, the Kents. The immigrant changed his name from Kal-El to Clark Kent in order to assimilate in his new country. Far from his home of Krypton, he adopted his new country and grew up believing in all of its doctrines and legends. Today, of course, the immigrant Superman could fly right over the fences on our southwest borders. He used his super powers to protect his country, and his people from harm, no matter where it came from.

The adventures of the flying immigrant were chronicled for years (1938 on) in DC Comic Books, in a 1950s television series The Adventures of Superman, starring George Reeve that ran six years, a second television series, Smallville, and numerous movies. He was often discussed on the TV show Seinfeld (Jerry Seinfeld was a huge fan).

Here, though, all the history of Superman is erased. We know he was a man in 1938 when the comic strip debuted. That meant he came to America in his spaceship, the optimistic immigrant, around 1914 or so. His childhood has always been chronicled, in comics and movies, against that Roaring Twenties/Great Depression backdrop. In Man of Steel he is a md-twenties adult in 2013 and grew up those 20 some years during the previous week. Now, it is perfectly OK to update stories; Julius Caesar has been a 21st century general, a CEO and even a woman. It is not OK to ignore the history of the 1920s and 30s. Growing up in the Depression made Superman the believer of, and defender of, America and the dreams of its people. The latest Superman does not dream of anything, except maybe how a pair of red pants.

This latest Superman movie also lacks that sense that American will always stick together to battle the bad guys. Here, the Americans arrest Superman and continually try to kill him or beat him up.

This movie is going to make a lot of money, either in U.S. or Krypton dollars, but it is only going to drag down the legend of Superman. The man of steel is just a comic book legend and not a real hero, but he is a cult hero, much like Batman and Tony Soprano, and needs his place in history.

He’ll be back, though. In some future year the Earth will again be threatened by space age devils and the man of steel will defeat them, red pants or not. Skip this movie and see the next one, and hope the producers of the next one remember that Superman came here around 1914, and not last Thursday – and that he is more powerful than a locomotive, too.