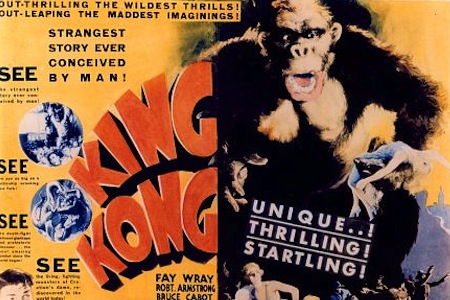 We all remember King Kong, the lovable big ape from Skull Island, in the last scenes of the 1933 black and white movie, which mesmerized Depression audiences. He was on stage at a Broadway theater, ripping apart his manacles and getting ready to romp through Times Square in search of his true love, Anne Darrow, who, he thought, had a thing for gorillas.

Now King Kong is back yet again. Last week, a new musical based on the 1933 Kong Kong movie opened in Melbourne, Australia, and will play through the end of August. If it does well, the talk is that the play will head to Broadway in 2014. Kong will be back home, lumbering through the canyons of New York and trying to swat planes from the top of the Empire State Building.

What is the magic of the King Kong story, still successful in this fading recession, eighty years later? Americans have always loved exotic beasts from the past, but none have captured our hearts like King Kong.

The first, and best, movie came out in 1933. It had vivid spectacular special effects; Kong looked as real as your next door neighbor. It became a classic and has run forever on television. It was remade again and again in Hollywood, with slight twists in the story.

Last year, the Horse Trade Theater Company in New York turned it into a radio play, based on the 1940s radio mystery format, and it scared audiences who came to see it. This summer Summerstage, a New York theatrical series, is even producing King Kong as a hip hop musical. It will play in public city parks throughout August. Kong is a ride at Universal Studios in Los Angeles and millions have howled in delight as Kong almost upends their gondola as he stretches up from the streets of New York and roars at the top of his lungs. Now it is big, brassy musical in Australia, where it is being heavily promoted at Melbourne’s Regent Theater.

Why is the big fella such a popular character in show business history?

1) Americans love huge, scary monsters. Monster movies have been a staple of American entertainment ever since cameras started to roll in the silent era. We have been frightened by, and adored, monsters from Godzilla to Rodan to The Thing to any battery of bizarre aliens Hollywood has created or flew here from another planet.

2) The beauty and the beast angle, whether with Kong or in Disney musicals, is an unbeatable format. In its purest sense, the beautiful woman falls for the true beast. It is symbolic of the notion that any dowdy looking guy, through charm, love and perseverance, can win the hand of the fair maiden (transform this to pure, wonderful girl wins heart of gorgeous millionaire). It is part of the American dream.

3) Audiences savor wonderful special effects and Kong, no matter what version, always had those. Whenever anyone sees the 1933 movie on television today they marvel at the way primitive early day movie special effects wizards produced such a believable looking ape. Today, with all of our computers, we can hardly do the same thing.

4) There is the lone warrior against the world, even if he is an ape. Whenever I see King Kong trying to bat away the airplanes on the top of the Empire State building, I am reminded of Davey Crockett swinging his rifle, Old Betsy, at the Mexican soldiers attacking him in the Disney story of the Alamo. I am reminded, too, of every American soldier fighting the enemy in every war we have ever fought.

5) He was a victim. Kong was minding his own business, like all of us, just sunbathing and picking bananas off trees on Skull Island, when greedy mercenaries arrived at the island, captured him and hauled him off to New York in chains to make money off him. This happens all the time. Someone has an idea to make a buck and they do anything, and abuse anybody, man or beast, to do it.

6) In the end, Americans, somehow, some way, will conquer any foe, whether the Nazis or King Kong. How did they kill Kong? We could not be stabbed to death, gunned down or poisoned so Americans in 1933 thought of the most modern, and lethal, attack possible, dozens of airplanes with their machine guns. If a bigger, better King Kong returned today, we could destroy him with new and more fatal army equipment – missiles, H bombs, anthrax. Americans always win over monsters, real or fiction. If we could get Kong, we could get Hitler and the communists, too, right?

7) Men will do anything for women. At the end of the 1933 film, the producer stands next to the fallen Kong and says that it was not the airplanes that killed him, but the beauty of Anne Darrow. The big ape would do anything for her. All guys will, whether they are 5’5”, 120 pounds or ninety foot tall bruiser gorillas.

8) The charm of history. We love to watch the movie because we get to see 1930s New York, the old ships and the rickety biplanes from Word War I, back in the air to fight yet another American enemy in Kong.

King Kong has an endless allure for Americans and now he is coming back again, this time with his co-stars singing and dancing in the theater. Can a Kong opera be far behind? How about The Kong Cycle? Or Carmen Goes Ape? The Barber of Skull Island?