Moving New Play on the Rosenbergs and 1950s Atomic Secrets 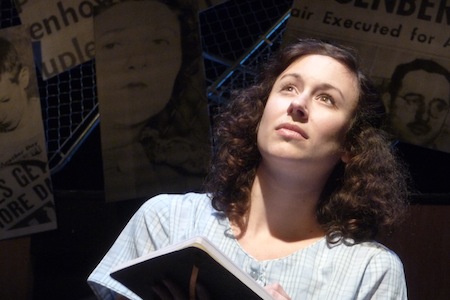 The summer of 2013 is the 60th anniversary of the execution of Ethel and Julius Rosenberg, accused of selling American atomic secrets to the Soviet Union from about 1943 to the early 1950s. Even though it was later proved that they were guilty, the pair remains political celebrities today.

Ethel Sings, by Joan Beber, is a moving drama about the couple, who died in their mid-30s (Ethel was 38, Julius 35), leaving behind two small children, Michael and Robert. Their case brought on several rulings by the U.S. Supreme Court, several delays of execution and even a last minute plea to President Dwight Eisenhower. Beber paints a fine portrait of the couple, who went from joining the Communist Party to organizing labor and political rallies to espionage. They were, like some other ultra-liberals of the era, convinced that world was in better hands with the Soviets than the Americans. So they decided to do what they could to help the Soviets. That was their downfall.

David Greenglass, the brother of Ethel, was accused of being part of the spy ring, but he avoided execution by turning state’s witness against the Rosenbergs (he spent 10 years in prison). Others in the ring all went to prison, Morton Sobell for 17 years, Harry Gold for 16. Julius and Ethel were prosecuted by rising star attorney Roy Cohn, who later became a celebrity himself.

The Rosenbergs were celebrities at the time because millions of Americans believed, in 1953 and for generations afterwards, that they were scapegoats, The Rosenbergs were liberals, Jews, labor leaders and Communists in an era when Senator Joe McCarthy and others were leading a strident and well publicized drive to rid America of all Communists and anti-Semitism was prevalent. They were also the only people executed for espionage during the entire Cold War (Ethel was one of the few women executed in America for any reason in that era). All of this, plus a tidal wave of press attention and the start of the Korean War, made the Rosenbergs innocent victims, supporters claimed. Loud protests on behalf of the Rosenbergs drew tens of thousands of people in several countries and were carried on television newscasts throughout the world.

Later, after the Soviet Union fell in 1991, KGB files made public showed the Rosenbergs as spies, as did a memoir by Nikita Krushchev, the release of the CIA’s ‘Venona Cables,’ a book by their contact, Alexander Feklisov, and other Soviet documents. These showed that the Rosenbergs were not only spies, but spies who had given the Soviets more than 1.000 pages of secret documents that, many said, enabled the Russians by build an atomic bomb by 1949 well ahead of schedule. This information also showed that the pair had probably been spying from the middle of World War II.

Ethel Sings features a strong cast, anchored by the powerful Shelby Kocee in the title role (she looks just like Ethel). She is wonderful as Ethel, who dreams endlessly of becoming a music theater star. She shows Ethel as a good mother, loyal wife, a woman emotionally battered by her mother and a deeply involved political leader. As her execution approaches, Kocee is even better as the scared Ethel, wondering just what it was they did that landed them in so much trouble. Playwright Beber’s focus is not so much on what the Rosenbergs did, or their trial, but what their last days were like.

Kocee gets strong support on stage from Dan Sykes as Julius, Alan Aymie as Greenglass, Richard Chassler as Roy Cohn, Penny Peyser as Ruth Greenglass and Greg Mullavey as Manny Bloch. Stasha Surdyke is wonderful as the ghost of a modern Joan of Arc, who does pushups as she dispenses advice. As an ensemble, the cast recreates the 1950s era nicely. Director Jules Aaron does good work in staging a powerful drama about a rather well known story. Set Designer Gary Guidinger used the stage well, turning the space into offices, street rally sites, prison waiting rooms and the execution chamber. He has blaring blown up black and white newspaper front pages all over the walls. By the way, the bulky wooden electric chair used in the play is pretty scary.

Playwright Beber brings Joan of Arc into the play in a charming way. The French heroine, executed too, is Ethel’s heroine. She sees herself as Joan and that is why Joan constantly gives her advice. Ethel was no Joan of Arc, though. Ethel was a spy who betrayed her country. There is a big difference.

Ethel sang to the wrong people.