As You Like It
Shakespeare Theatre of New Jersey
36 Madison Ave, Madison, NJ
Drew University 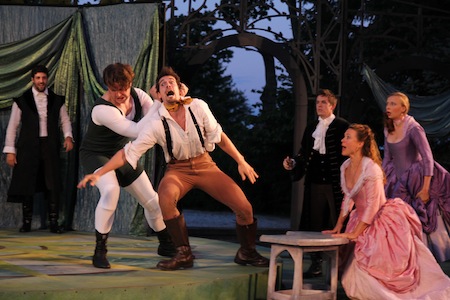 All is not well in the city where William Shakespeare’s As You Like It begins. The play, written in 1599, now running at the Shakespeare Theatre of New Jersey, charts the problems of urban life as cities grow, often without much order, in contrast to the increasingly inviting green retreats of the rural countryside. Within this conflict is the romance between Orlando, a frustrated younger brother in a powerful family, and the lovely Rosalind, a Duke’s daughter.

Separately, the pair flees the city and seeks out the solitude of the Forest of Arden, with its thick clusters of trees, meandering streams and cast of characters. Rosalind disguises herself as a man so that she can keep an eye on Orlando, who is smitten with her as a girl. They are one of several pairs of lovers in the forest. The play is simple and relies on its director and actors to make it interesting. They do. As You Like It is impressive.

Caralyn Kozlowski, as Rosalind, is the towering star of As You Like It. Her work as the charming young woman, and the disguised young man, is nothing short of majestic. She exhibits all the beauty of a woman the era, with her gentle touches, attention to fashion and yearning for love. Then, in her pants and hat, that she constantly pulls down over her forehead to hold her hair under it, she tries, sometimes well and sometimes awkwardly, to be a man. As a man, she still cannot abandon her womanhood and yearns to fling herself into the arms of Orlando, even getting him to play a game with her in which she, as a man, pretends to be his adorable Rosalind. It is a silly game, but, for the audience, it works rather well. This persona gives Kozlowski a chance, numerous chances, to shine.

It is not just the stellar work of Kozlowski as Rosalind that makes As You Like It such a wonderful play. Director Bonnie Monte has done a magnificent job of staging the play and, with set designer Jonathan Wentz, created a serene forest for the story at Drew’s unusual outdoor theater.

When the Shakespeare Theater decided to do outdoor shows years ago, they turned to St. Elizabeth’s College because the school, across the highway from Drew, had an impressive stone amphitheater, built along the lines of the 3,000 year old Greek amphitheaters. Once you walk into the theater, you are surrounded by history just because of the look and feel of it.

There is a wood directly behind the open end of the amphitheater and its stage. Monte brings all of the woods, and lawn around the stage, into the performance, having carriages ride through the trees, followed by strolling performers. There is wonderful lighting in the play that brings in different parts of the theater and woods. Actors glide up and down the stone aisles and chat with the audience. There is an airport a few miles away and the 1599 performers, to the delight of all, wave to the 2013 planes flying high overhead.

The costumes by Paul Canada are luscious, most in bright, eye popping colors and stand out nicely against the trees and bushes.

The director even had actors play five pristine white wool sheep. They crawled around the stage in different parts of the play, baah-ing away, drawing thunderous applause from all.

In Shakespeare’s England, there was considerable concern over the topsy-turvy growth of London. By 1600, London had well over 200,000 residents and already had considerable urban problems of crime, sanitation and overcrowding. Queen Elizabeth, near the end of her reign, had turned England into a world power. Her forces had defeated the Spanish Armada in 1588 and the next door neighbor Irish. She had consolidated power and made numerous improvements throughout the realm. Yet, right under her nose, London exploded in population and shook with urban troubles. No one seemed to have a solution to London’s woes, or those of any urban area, than to move to the country.

London’s problems, and that of other European cities, that were replicated in American 150 years or so later, are debated in the play, where some men argue that life is better in the city, and at court, and others claim that the quiet, peaceful country life, where the waters are clean and the air is fresh, is superior. In the country, they say, men are men. Shakespeare’s play certainly favors the country from the congested and dirty streets of sixteenth century Europe.

The work of Kozlowski as Rosalind, the setting, theater and charm of the production make As You Like It a very enjoyable piece of Shakespeare and piece of history, too,