When Does a War End for the Veterans? 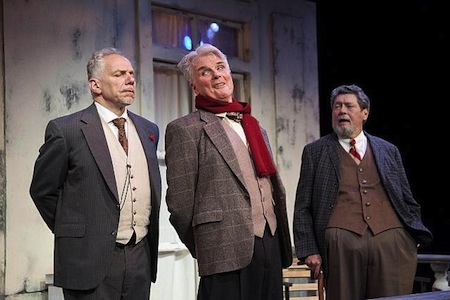 When does a war end for the men who fought it?

That’s the question in French writer Gerald Sibleyras play Heroes, translated by Tom Stoppard, which just opened at Shakespeare and Company in the Berkshires. The setting is 1959 somewhere in France. Three veterans of World War One, Phillipe, Gustave and Henri, reminisce about the war every day on the veranda of the Old Soldiers home where they live. Henry has been there 25 years and Phillipe ten. Gustave arrived six months ago.

Sibleyras’ fine play seems slow moving and tepid at first. It appears to be the story of three perfectly harmless and lovable old men spending their golden years glorying in their wartime heroism long ago, cheered by all. As the minutes slip way, though, you see them as badly damaged individuals whose problems grow as each day passes. They don’t do anything well except re-fight World War One and act as much as soldiers as they can remember.

Gustave, who still has shrapnel in his head from a wartime injury, collapses every day. He is convinced that since no two birthdays at the home are ever celebrated together, the superintendent of the home must arrange for the death of one of the two men who born on the same day. Henry goes on mindless afternoon walks through the nearby village where he shamelessly gawks at teenaged girls. Gustave hates everybody and cannot get along with anybody except his two comrades. Two of the three men are convinced that a statue of a dog that sits on the veranda is alive.

They do not do much each day beyond discussing infantile schemes and baseless plots against them by the nun who runs the home. The trio, armed with maps and with Gustave wearing a military helmet, take up much of the second act plotting to flee the Old Soldiers Home, race across an open meadow, take a row of poplar trees and then, somehow, get to Indochina. It is a ludicrous plan but they believe it can work. It is an example of how the playwright carefully builds the story and then sends it towards its climax

By the middle of act two, the audience understands that this is not the story of three adorable old men, but the tale of a trio of warped war vets who can no long function on their own (each was sent to the home by irate family members). Henri has spent 25 years there. How many more? Gustave just arrived. Will he be there 25 years from now?

Despite the sadness, the play is laced with scorching humor, provided by the French writer and, perhaps, by British translator Stoppard. There is a scene in which the men practice their escape by tying themselves together with a long garden hose. The Marx brothers could not have pulled the scene off with much more humor than Phillipe, Gustave and Henri.

Will they escape? Will three wily old soldiers regain their savvy and toughness and bolt from the home and make it to Indochina? Will the nun who runs the home stop them?

The lack of history in the men’s lives is a small negative in this otherwise nicely written play. The men fought in a war that ended in 1918 and went into the home several decades later. What happened in between? Why is there no mention at all of World War II, that ravaged France?

There is also little mention of what is going on in 1959. Their crazy plan to escape the home and make it to Indochina does not mention the fact that they are French and that five years earlier, at Dienbienphu, the Vietnamese overran the French army there and booted most of it out of the region. To whose Indochina will the trio move? Why is there no mention of the French tensions with Algeria in 1959? How has France changed, and changed for them, in the 1950s? What about Charles De Gaulle? Was it a time of quiet desperation for people there as historians claim it was for many Americans?

One big nagging question for anyone in America watching this play is what was life like for vets off World War I here? What were our Old Soldiers Homes like? How does any country take care of its soldiers? When does the war really end for many of them, no matter for what nation they fight?

Kevin Coleman did a fine job of directing the play, that takes place entirely on the veranda. He put a lot of pathos into the play, as well as sharp wit. He received fine performances from Jonathan Epstein as Gustave, Malcolm Ingram as Phillipe and Robert Lohbauer as Henri.