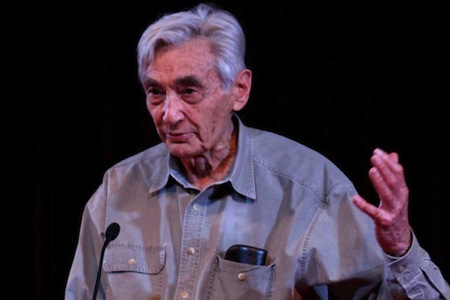 Alan Kraut and Katherine Finley reiterated on the OAH website that the organization remains firmly behind the principle of academic freedom, and that “The OAH regards the current episode as a “teachable moment” when instructors in American history at every level have the opportunity to convey to our students how historians debate ideas and assess the merit of each others' written work.”

Daniels wrote in an email to several education officials shortly after Zinn's death in 2010 that “this terrible anti-American academic has finally passed away … [His book] A People's History of the United States … is a truly execrable, anti-factual piece of disinformation that misstates American history on every page. Can someone assure me that it is not in use anywhere in Indiana? If it is, how do we get rid of it before more young people are force-fed a totally false version of our history?”

He wrote in a later email, “This crap should not be accepted for any credit by the state.”

Daniels told Inside Higher Ed on July 17 that he was mainly concerned with elementary and secondary school teachers being “exposed” to “falsifications” of history and denied that his request was an infringement on academic freedom. “If Howard Zinn had been a tenured professor on [the Purdue campus] I would have defended anything he would have wanted to write, but to not be immune from criticism.

Robert Helfenbein, director of the Center for Urban and Multicultural Education at Purdue, told Inside Higher Ed in an interview that he regularly uses Zinn's work in the classroom, and intends to continue to do so whatever Daniels says.

After the Inside Higher Ed story broke, Daniels's emails were released to the AP in their entirety.

Daniels hit back on Wednesday by calling the original AP story “an utter fabrication,” and issued a statement on Purdue's website defending his actions. “My emails infringed on no one's academic freedom and proposed absolutely no censorship of any person or viewpoint.” Daniels also pointed out in his statement and in an interview with Inside Higher Ed that both Arthur M. Schlesinger and Michael Kazin have been critical of Zinn's scholarship. He received the full support of Purdue's board of trustees in a statement, as well as voting to grant Daniels a $58,000 bonus for his successful first six months as president of the university.

Last Thursday, the Fort Wayne News-Sentinel published an editorial guardedly supportive of Daniels. “If a book is nothing but liberal propaganda distorting American history,” the paper wrote, “and that's exactly what Zinn's book is – isn't that censorship of the worst kind, a suppression of the truth?” He also received support from the conservative blog PowerLine, which called him a “hero” for “trying to spare Indiana students the mis-education that comes from reading the execrable Howard Zinn.” Ron Radosh, an historian and columnist for PJ Media, also voiced support for the former governor, lauding him for his stand against "leftist political correctness."

The controversy has continued into the following week. On Friday, the American Historical Association released a statement which “deplores the spirit and intent of former Governor Daniels's emails. … Whatever the strengths or weaknesses of Howard Zinn's text … we believe that the open discussion of controversial books benefits students, historians, and the general public alike.” On Monday, a group of ninety Purdue faculty members published an open letter to Daniels which went into some detail about Zinn's work and the nature of academic discourse. “Most experts in the field of U.S. history,” the letter read, “do not take issue with Howard Zinn's facts, even when they do take issue with his conclusions."

Even among traditionally liberal academe, Howard Zinn has been a lightning rod of controversy. Within the past year alone, The New Republic ran a featured review by Rutgers historian David Greenberg critical of Zinn, and Sam Wineburg, a professor of education and history at Stanford published an article last December in The American E ducatorcastigating A People's History. Zinn's defenders struck back; Robert Cohen wrote for HNN last January that the real value of Zinn's work lies in how it is used in K-12 classrooms to pressure dominant narratives in American history (without necessarily overturning them). And Rick Shenkman, the publisher and editor-in-chief of HNN, wrote about Zinn's blindness to the weaknesses of the American "public" in 2010.

Scott Jaschik has an excellent summary of Zinn's contested reputation within the historical community in a follow-up to his original reporting for Inside Higher Ed.