Jeremy Kuzmarov is J.P. Walker assistant professor of history at the University of Tulsa and author of "The Myth of the Addicted Army: Vietnam and the Modern War on Drugs" (UMass, 2009) and "Modernizing Repression: Police Training and Nation Building in the American Century" (UMass, 2009). 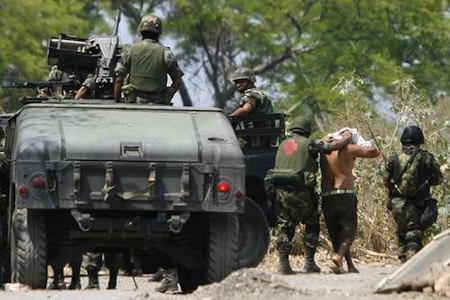 On May 11, 2012, DEA-trained forces opened fire on a group traveling upriver by canoe in the northeast Mosquitia region of Honduras, killing four Afro-indigenous civilians, including two pregnant women. A subsequent inquiry determined that U.S. forces were heavily involved in the botched drug raid and that the helicopters were owned by the State Department. Less than a month earlier, Latin American leaders at the Summit of the Americas in Cartegena Colombia had conveyed their discontent with the War on Drugs, linking it to corruption and savage violence among the drug cartels. Colombian President Juan Manuel Santos asserted that after forty years of fighting, his country was no closer to victory, while Guatemala’s President General Otto Perez Molina called on the United States to pay countries for the drugs that they bust.

The Obama administration however stood firm in its commitment, with Vice President Joseph Biden telling delegates that there was “no possibility that the administration will change its policy on legalization.” This stance exemplifies the conservative character of America’s forty-fourth president despite his often populist rhetoric. Benefiting from the hip image his Madison Avenue sponsors cultivated for him that included his admitting to smoking cigarettes and marijuana as a rebellious youth, Obama has made periodic comments about having “bigger fish to fry” than marijuana users. In formal policy documents, his administration has emphasized a third way approach that rejects an enforcement-centric “War on Drugs” and legalization. Science, it claims, has shown that drug addiction is a disease of the brain that can be treated. The disease model however has been challenged by social scientists who emphasize that drug use is a learned behavior passed on through peer association and often serves as a form of rebellion for those facing bleak career prospects. A progressive public policy should include extensive community and anti-poverty programs, which the Obama administration has never advanced.

Obama’s predecessor, George W. Bush adopted a public relations campaign against marijuana that promoted a long discredited link with mental insanity and murder. There were about 40,000 paramilitary SWAT raids on Americans every year -- mostly for nonviolent drug law offenses. Some targeted AIDS and cancer patients who used medical marijuana in states that had legalized it. Although the rhetoric has changed somewhat, Obama has spent over $9 billion per year on narcotic law enforcement, tripling the total spent by the War on Drugs guru himself, Ronald Reagan. While implementing a few progressive measures such as expanding access to drug treatment through the Affordable Care Act and lessening mandatory minimum sentencing for crack cocaine, Obama has expanded Pentagon programs which provide military equipment to local police forces, thus intensifying the trend of police militarization. His administration has deployed unprecedented resources along the U.S.-Mexican border, intensifying the use of drones for surveillance. Breaking with campaign pledges, Obama also authorized over 100 raids on medical marijuana dispensaries, threatening to imprison state employees responsible for regulation. “There’s no question that Obama’s the worst president on medical marijuana,” said Rob Kampia, executive director of the marijuana policy project, as quoted in Rolling Stone.

In 2009, Obama unveiled Plan Merida, a $1.7 billion dollar assistance program to Mexico modeled after Plan Colombia, a militarized approach inaugurated by Bill Clinton that helped to beef up the Colombian military in its war against leftist FARC who were considered “narco-guerrillas.” Three quarters of Merida’s funding has been directed towards the military with the rest going towards police training programs that have historically served as a cover for counterintelligence operations and have done little to advance democratic policing standards. Many of the weapons provided under Merida have bolstered the arsenal of the cartels who recruit their enforcers from among police and military officers trained by the United States. They have also been used to suppress peasant uprisings in Chiapas and Oaxaca province driven by social inequalities that have grown worse under NAFTA.

As in Colombia, Mexican government officials have long been corrupted by the drug traffic, allowing the cartels to launder their profits through an unregulated banking system. Prior to the arrest of drug lord Juaquín “el chapo” Guzman’s seven children in a pre-election publicity stunt, President Felipe Calderon was accused of allowing the Sinaloa cartel to escape most of the government’s firepower because of its ties to Mexican intelligence and former Colombian president Alvaro Uribe Velez, and because drug proceeds helped to keep the economy afloat during the economic crisis. Calderon’s inability to contain the mounting drug related violence contributed to his 2012 electoral defeat. His drug czar, Noe Ramirez, was charged with accepting $450,000 in bribes each month. Meanwhile the Bureau of Alcohol, Tobacco and Firearms supplied weapons to cartel members under the Operation Fast and the Furious.

Plan Merida and its contribution to skyrocketing violence epitomize the failure of Obama’s drug policy. Rather than relying on our hopeless forty-fourth president and an even more hopeless Republican-controlled Congress, citizen groups need to mobilize together to oppose the waste of their hard earned taxpayer dollars in the War on Drugs. Necessary social change, as the late Howard Zinn pointed out in his magisterial People’s History, only comes about through popular action and pressure from below, and this is sorely needed today.