Fighting to Save a Sleazy Motel in Boston in the 1940s 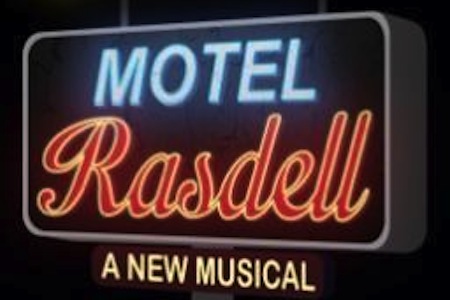 Each summer, the festival presents fifty or so plays with a variety of themes as well as history

In the 1940s, all proper Bostonian scoffed at the sleazy Motel Rasdell, a fictional hotel on the edge of the city. It was home to drug dealers, drug addicts on their “reefers,” derelicts, the homeless and hard edged hookers. Nobody ever mistook it for a dorm at Harvard, on the other side of the Charles River.

It is also home to a bouncy new musical, Motel Rasdell, with an exuberant cast, a solid book and a charming, if harrowing, story.

John is a reporter for a Boston newspaper and a womanizer in his personal life. He begins an affair with a hooker, Eve, who works at the Rasdell. He learns all about the wild life at the motel, and the illegality of just about everything that goes on there and writes a story about it. At the same time, his wife Jane catches him in his double life and leaves for Cape Cod, where she sulks on the beach. His two teenaged kids then try to run the house without her.

Back at the motel, Matt, who really loves Eve, tries to revive his romance with her, insanely jealous of her relationship to John. Amid all of this, a pregnant hooker has her baby, everybody is busted on a police raid instigated by the reporter and the city threatens to burn down the building and imprison everybody who lives there.

The musical is well written by Christina Bracco, Danielle de Matteo and Caitlin Angelo. It has dazzling choreography by Greg Graham and Alison Solomon and wonderful 1940s costumes (you love the hooker in the tight fire engine red dress and black stockings). From the first moment of the play, you are caught up in the music and the story

It is only the costumes that connect you to the 1940s, though. With different costumes, this play could have taken place last Thursday in any motel in any city in America. No one in the play discusses life in Boston in the 1940s, a city that was, depending on the year, on the brink of World War II, in the middle of it or recovering from the conflict.

A lot was going on in Boston in the 1940s. The city was consumed with the wild adventures of Mayor James Michael Curley, one of the most colorful characters in American political history. Curley served four terms as Mayor, two as a Congressman and one as Governor in that era. He led a corrupt administration. Curley is most famous for getting re-elected Mayor while serving a prison sentence.

There was Boston’s awful Coconut Grove night club fire in 1942, that claimed the lives of 492 and terrified club goers all over America.

Hey, nobody even mentioned that in 1941 Boston Red Sox slugger Ted Williams batted .406, the last man in history to hit .400.

So why not better history?

There is one awful gaffe in the play, too. The play is set in the 1940s and yet the actors talk about a raid on the Rasdell by Governor Mitt Romney. He held office from 2003 to 2007. Somebody should have caught that. It could have just as easily been a raid by Governor Leverett Saltonstall, who ran the state in the early 1940s.

Even so, the 1940s musical is pleasant. Unlike most musicals, the man who appears to be the hero of the story, John, turns out to be the villain. It is an unexpected and enjoyable switch that the performers pull off rather well. The play is saturated with songs, most of them good (even though many sound like each other). The cast is quite good. They tell an enchanting story about a flea bag motel that could have existed in any city. The play is really not about tenant’s strong defense to save their homes, as it is promoted. It is more about how society marginalizes drug addicts, pushers and prostitutes and the run-down and pretty dangerous universe in which they live.

Matt, played by Tim Young, is a secondary character in the story, but he steals the show with his superb singing and mercurial dancing. This guy can slide across a stage!

PRODUCTION: The play is produced by Jeff Davis/Davis Productions, Cory Gardner and the PATH Fund. Sets: Rob Bursztyn, Lighting: Mac Smith, Sound, Devin Gee, Costumes: Jaime Torres. The play is directed by Donnie Kehr. The run has ended, but many of the festival plays are later produced around the country. Watch for them at a theater near you.