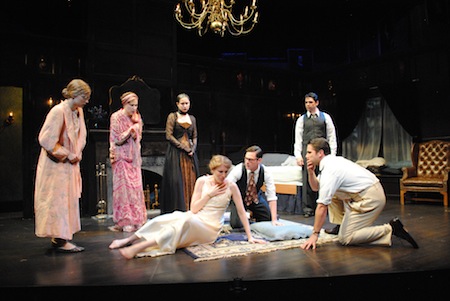 The Cat and the Canary is one of the most successful plays and horror movies of all time. It has been staged endlessly in its nearly 100 year history and Hollywood has turned it into a movie six different times. It is even the basis for the legendary Haunted Mansion at Disney World, in Orlando, Florida.

You can understand why at the Unicorn Theater, in the Berkshires, where it is up and running, and scaring, once again. The fright fest starts as you park outside the rustic old red barn theater. A half dozen “ghosts,” dressed in 1920s costumes, greet theatergoers in a dread-filled, zombie-ish way, heads bobbing and eyes opening and closing slowly. Inside, the theater has been turned into Glencliff Manor, that resembles every black and white manor house you ever saw in chilling movies.

It is here, with scary organ music as the backdrop, that director Ethan Heard has staged John Willard’s play in a masterful way, wringing all of the drama and fright out of it while, at the same time zeroing in on its humor and turning it into a campy hit on not just The Cat and the Canary, but every horror movie that Bela Lugosi and Boris Karloff ever starred in. He has done a sensational job of both terrifying the audience and making it laugh.

The plot of Cat is simple. Hated old patriarch Cyrus West left an odd will, one that required six heirs to meet exactly twenty years after his death to learn its terms, all expecting a financial windfall. Glencliff Manor was run in their absence by a very spooky Mrs. Underwood, who goes around lighting up closets and fireplaces with a snap of her fingers and terrorizing everybody she meets.

Tonight is the night and the heirs learn that everything goes to young, beautiful, dignified Annabelle West. Or will it? There is a codicil to the will that someone else will get the West fortune if Annabelle proves to be “unsound.”

The rest of the play tracks the efforts of someone to prove Annabelle crazy and they do it in marvelous ways. Or is the demon doing it, the dark fiend that has just escaped from a local insane asylum and is being chased by an attendant in a white suit? Or is it one of the ghosts who have haunted the manor house for years? Is it old man West himself, crawling up out of the grave after twenty years? A jealous Mrs. Underwood?

What follows is a fright festival with lots of wit. Crotchety old Mr. Crosby, the lawyer in charge of the will, has something ghastly happen to him. Two tenacious suitors of Annabelle clash. A relative, Susan Sillsby, weeps and frets for two hours in a masterful performance by Sophie von Haselberg. Bold Paul Jones, another heir, played wonderfully by Tom Pecinka, saves the day, and the night, too. Annabelle, captured vividly by Ashton Heyl, faints from room to room. Will the heir be revealed at last? Will they all be murdered?

The play offers a nice look at 1922 history. The manor house is full of people dressed in period costumes. One man, in the era’s long coat and goggles, pretends he is driving a new roadster, the attendant wears the multi buttoned hospital outfit of the era. There are no radios, of course, because their mass marketing is still a few years away.

In the program notes, it is mentioned that most of the cast is made up of graduate students at the Yale Drama School. They are all so skilled you would think they had been in the business for twenty years or more. They all have exquisite timing and play the physical jokes as well as the verbal ones. They have taken a work that could have been a tired on chestnut and made it look like it was written last week.

The highlight the 1920s caper, though, is the special effects, put together by scenic designer Reid Thompson and associate Meredith Ries, lighting designer Shawn F. Boyle, and sound designer Steven Brush and his associate, Tyler Kieffer. The manor house looks much like Disney’s Haunted Mansion, which of course, looks just like the old manor houses from the play and film. There are the requisite oversized family portraits, some hung sideways and some upside down, eerie stuffed animals, hidden safes, revolving book cases, rattling door knobs, bizarre lighting patterns, shaky chandeliers and the most believable thunder and lightning storm one ever saw (honest, you want to put up your umbrella).

There is one happy historic footnote to the play. The character of Mrs. Underwood was originally named Mammy, but her name, and persona, was changed over the years.

The Cat and the Canary is a marvelous period piece. This historic horror is as nerve-rattling as ever, offers a nice window on Roaring Twenties history and, well, scares the daylights out of you.