Wars are Won Neither By Lies Nor By Firepower 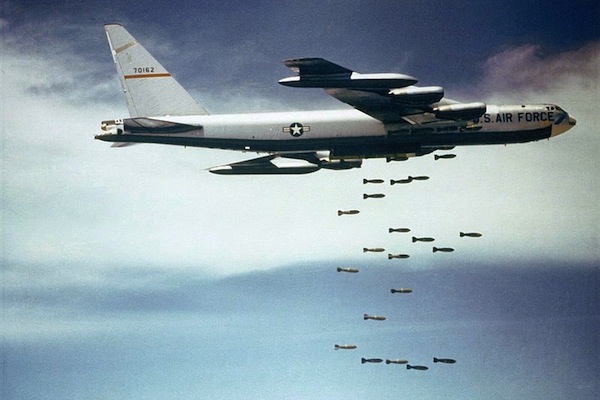 The American way of war has often relied on massive firepower as a way to reduce American troop casualties.  This was true of World War II and Korea, which were conventional “big battalion” wars, and it was also true of Vietnam, which was an unconventional war involving much smaller units.  The problem in Vietnam was the wanton use of firepower, to include napalm and Agent Orange as well as traditional bombs and artillery shells, which devastated the countryside and destroyed the lives of so many innocent Vietnamese.  The horror of this approach to war was recently captured in Nick Turse’s bestseller, Kill Anything that Moves: The Real American War in Vietnam.

During the Vietnam War, the American government was at pains to deny that massive firepower was being misused, even when that criticism came from within the ranks.  This lesson was brought home to me while reading Douglas Kinnard’s Adventures in Two Worlds: Vietnam General and Vermont Professor, in which he looks back on his earlier book about Vietnam, The War Managers.  Upon publishing The War Managers in the mid-1970s, Kinnard says in Adventures (127-28) that he received the following note from an informed reader:

“Another [note received] from a colonel who had had two tours of duty in Vietnam and had tried in 1969 to publish an article criticizing the tactical conduct of the war, especially the overuse of fire power.  Indeed, any of us who were connected with the use of fire power knew it was overused, and certainly this was true in 1969.  The publication of his article in The Military Review was turned down not by the journal itself but by the office of the Secretary of Defense.  Let me point out that the turndown was not a rejection based on international policy or strategic implications.  ‘Colonel X’s article has been reviewed by this office and is returned without clearance on the basis of policy objections.  The main thrust of the article is in conflict with the announced policies of reducing US casualties and of Vietnamization of the War.  Publication of an article of this nature is also considered detrimental to the national interest in that it erroneously lends validity to charges of catastrophic death and destruction in the Republic of Vietnam.’ Signed, Roger Delaney, Deputy Director of Security Review.  The article, by the way, was a very interesting and informative one.  The turndown is incredible, but it is part of the history of the War.” [emphasis added]

It’s fascinating how the Office of the Secretary of Defense (OSD) acted to suppress internal criticism within the U.S. Army itself that was aimed at curbing excessive firepower and its devastating impact on South Vietnam, which was after all our ally in that war.

1.  Firepower (the more, the better) was linked to reducing U.S. casualties, thus making an unpopular war more palatable to Americans.

2.  Firepower (the more, the better) was used as a prop to Vietnamization, i.e. a crutch for ARVN (the South Vietnamese Army) in the field.  When ARVN didn’t perform well, massive firepower came to the rescue, which served to mask the inadequacies of Vietnamization.

3.  Even with this massive firepower, you as an American soldier were not allowed to say that it was causing widespread death and destruction, leading to the loss of the very hearts and minds that we claimed we were trying to win.  In other words, you had to deny logic as well as the evidence of your own eyes.

There’s a famous paradoxical saying about the Vietnam War: Americans had to destroy the Vietnamese village to save it.  What General Kinnard’s anecdote makes clear is that by 1969 you weren’t even allowed to say that you were destroying the village even as you burned it, since such acts so obviously contradicted the announced policy of Vietnamization as well as the idea of pursuing “peace with honor.”

But how can there be honor when honest efforts by American troops to critique deeply flawed and immoral tactics are suppressed in the name of political expediency?