Practical Wisdom, According to Messrs. Franklin and Emerson

Walter G. Moss is a professor emeritus of history at Eastern Michigan University. For a list of his recent books and online publications, including some on wisdom, click here. His most recent book is An Age of Progress? Clashing Twentieth-Century Global Forces (Anthem Press, 2008). 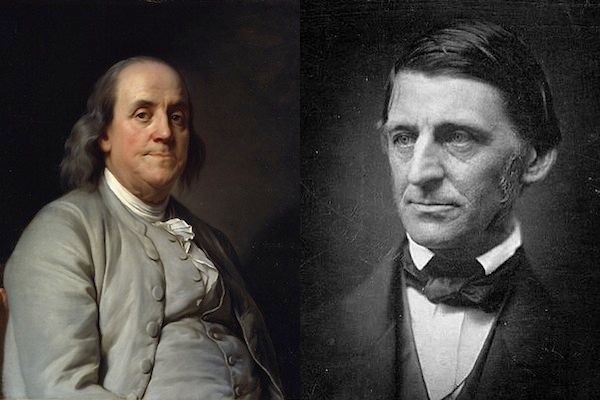 In the United States today few of us value wisdom. Most of our politicians do not, nor does our culture. What U. S. humorist Dave Barry once said about television – its “message has always been that the need for truth, wisdom and world peace pales by comparison with the need for a toothpaste that offers whiter teeth [or some other product that promises other enrichments]” – applies generally to our consumer culture. Perhaps it is not accidental that the decline of regard for wisdom has paralleled the rise of our avaricious consuming culture.

Earlier, however, in the eighteenth and nineteenth centuries, wisdom was still valued by leading thinkers. In his The Founding Fathers Reconsidered, R. Bernstein writes that some of the founding fathers “saw the Enlightenment as an opportunity for a gigantic project of sorting human wisdom – identifying and conserving what was worth conserving in the best of the past while setting aside what had to be revised or replaced.” One such founding father was Benjamin Franklin. During the nineteenth century Ralph Waldo Emerson was perhaps our most influential thinker, and he too valued wisdom.

In one of Franklin’s earliest writings (1722), while still a young apprentice printer, he wrote that “without Freedom of Thought, there can be no such Thing as Wisdom.” His Autobiography indicates that as a very young man, when not yet as far removed from his Presbyterian roots as he would later be, he looked to such sources as the Bible’s Book of Proverbs for wisdom, and he thought “God to be the fountain of wisdom.” He composed a short prayer that contained these words: “O powerful Goodness! bountiful Father! merciful Guide! increase in me that wisdom which discovers my truest interest. Strengthen my resolutions to perform what that wisdom dictates.”

Franklin's Autobiography also indicates that he wished the hundreds of proverbs contained in his multi-year best-seller, Poor Richard's Almanac, to reflect some of “the wisdom of many ages and nations.” Thus, we come across ones like “After crosses and losses men grow humbler and wiser” and about 15 others containing some variant of the word wise or wisdom.

The type of wisdom that most interested Franklin was what Aristotle called “practical wisdom.” It involves making good choices in our everyday private and public lives and is deeply concerned with the common good.

Historian Andrew S. Trees in an Introduction to Franklin’s Autobiography notes his extensive service in behalf of the public good: his establishing of “the first circulating library in America” (1731), “a fire company (1736), the American Philosophical Society (1743), a college that later became the University of Pennsylvania (1749), an insurance company (1751), and a city hospital (1751). Trees also notes his contributing to “other improvements in city life, such as streetlights and street cleaning... . After his retirement [at age 42], Franklin busied himself with science and performed a variety of experiments with electricity... . Lightning rods [which he invented] soon began to appear on buildings throughout the world.”

But public service, not science, continued to occupy most of Franklin’s time. After being elected in 1751 to the Pennsylvania Assembly, he spent most of his remaining years in government service of one type or another. From 1757 to 1775, he lived mainly in England representing Pennsylvania and later also other colonies. While there, he became the chief American voice in Britain.

Returning to America, he participated in the second Continental Congress, but in 1776 he returned to Europe seeking French support for the American Revolution. After the war he helped negotiate the peace with Great Britain (Treaty of Paris) and served as U.S. Minister to France. He returned to Philadelphia in 1785, and attended the Constitutional Convention in 1787. That same year he became president of the Pennsylvania Society for Promoting the Abolition of Slavery. In February 1790, he presented a petition to Congress in its behalf.

In April 1787, shortly before the beginning of the Constitutional Convention, he wrote to Jefferson:

The Delegates [to the Convention] generally appointed as far as I have heard of them are Men of Character for Prudence and Ability, so that I hope Good from their Meeting. Indeed if it does not do Good it must do Harm, as it will show that we have not Wisdom enough among us to govern ourselves.

At the Convention itself, after about a month of the delegates demonstrating what he called “melancholy proof of the imperfection of the human understanding ,” he said, “We indeed seem to feel our own want of political wisdom, since we have been running all about in search of it.”

In 1824, Ralph Waldo Emerson was still a year away from entering Harvard Divinity School to prepare himself to become a minister. He wrote in his journal:

There is another sort of book which appears now and then in the world, once in two or three centuries perhaps, and which soon or late gets a foothold in popular esteem. I allude to those books which collect and embody the wisdom of their times, and so mark the stages of human improvement. Such are the Proverbs of Solomon, the Essays of Montaigne, and eminently the Essays of Bacon... . I should like to add another volume to this valuable work.

To an unusual extent Emerson fulfilled this dream of his youth: like Montaigne and Bacon, he became a prolific essayist and tried to dispense wisdom.

Vernon Parrington in his Main Currents in American Thought wrote of Emerson: “Wisdom did not come to him of its own accord; it was painfully groped for... . To invest his days wisely was his single purpose.”

Throughout his works one finds many mentions of wisdom and being wise. A search at one site of Emerson’s quotes using the words wise and wisdom provides about eighty results.

In “The Over-Soul” he wrote: “We see the world piece by piece, as the sun, the moon, the animal, the tree; but the whole, of which these are the shining parts, is the soul. Only by the vision of that Wisdom can the horoscope of the ages be read.” In his essay on “Nature,” we read that “wisdom is infused into every form. It has been poured into us as blood.”

In “Self-Reliance,” he mentioned intuition as the “primary wisdom,” and added: “Whenever a mind is simple, and receives a divine wisdom, old things pass away.” But, as the title of his essay suggests—despite his emphasis on us all being part of a larger Over-soul and partaking in divine wisdom—he stressed self-reliance. In a later essay on “Experience,” he wrote that “the life of truth ... . does not attempt another's work, nor adopt another's facts. It is a main lesson of wisdom to know your own from another's.”

He associated various positive virtues with wisdom. For example, in an 1841 speech he asked about love, “Is it not a certain admirable wisdom, preferable to all other advantages?” And in an essay appearing that same year, he declared, “We judge of a man's wisdom by his hope.” In a later essay, “Considerations by the Way,” he suggests that empathy for the poor can be combined with experience to make us wiser. “He who is to be wise for many, must not be protected. He must know the huts where poor men lie, and the chores which poor men do.”

Earlier, in January 1835, he had written in his journal of the wisdom that comes from meditation. But he thought that wisdom was displayed primarily in actions not words. Like Franklin, whom he admired, he was an advocate of practical wisdom. In “Experience,” he stated, “What help from thought?... Intellectual tasting of life will not supersede muscular activity... . To finish the moment, to find the journey's end in every step of the road, to live the greatest number of good hours, is wisdom.”

In one of his final essays, Natural History of Intellect, he stated:

There are men of great apprehension, discursive minds, who easily entertain ideas, but are not exact, severe with themselves, cannot connect or arrange their thoughts so as effectively to report them. A blending of these two—the intellectual perception of truth and the moral sentiment of right—is wisdom. All thought is practical. Wishing is one thing; will another.

In an earlier essay, “Civilization” he wrote that “the skilful combinations of civil government ... require wisdom and conduct in the rulers.”

Emerson died in 1882. From the 1890s forward, as historian William Leach has written:

American corporate business, in league with key institutions, began the transformation of American society into a society preoccupied with consumption, with comfort and bodily well-being, with luxury, spending, and acquisition, with more goods this year than last, more next year than this. American consumer capitalism produced a culture almost violently hostile to the past and to tradition, a future-oriented culture of desire that confused the good life with goods. It was a culture that first appeared as an alternative culture ... and then unfolded to become the reigning culture in the United States.

At the beginning of this essay, I suggested a link between the rise of our consumer culture and the decline of our regard for wisdom. Others have suggested other reasons for the decline; and undoubtedly, there are many causes why we no longer regard wisdom as Franklin and Emerson did. But in 1973 economist/environmentalist E. F. Schumacher stated that “the cultivation and expansion of needs is the antithesis of wisdom,” and that by ignoring wisdom we risked building up “a monster economy, which destroys the world.” Four decades later, his words are still worth pondering. So too are those on wisdom of Franklin and Emerson.