One Hundred Years to Open All the Presidents’ Records? 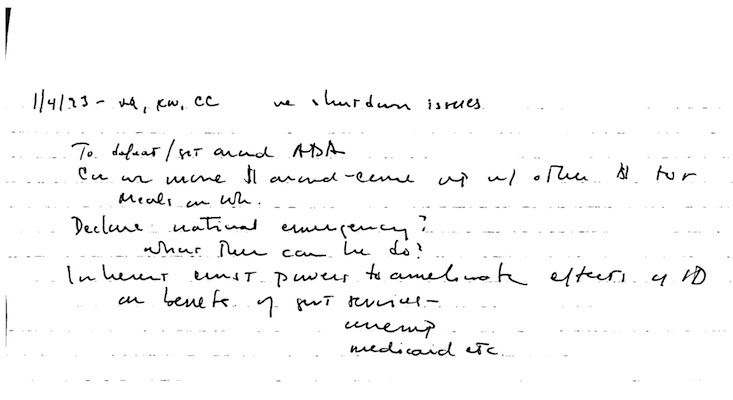 Federal presidential libraries preserve, protect and make available the records of Chief Executives from Herbert Hoover through George W. Bush. Because of changes in the 1970s to the laws governing the libraries, the records of the most recent presidents will not be fully available to the public for a hundred years -- possibly longer. Without significant reform, taxpayers will continue to support the newer libraries’ legacy-burnishing museum functions and public (often partisan) events while historians, journalists, writers, students and the rest of the public are locked out of the records.

The laws that govern access to these documents, photographs, film, video and audiotape are flawed, and have had exactly the opposite effect that their authors -- reformers -- intended. Because of the years-long backlog for access to recent presidential records, dissertation topics are revised, books are abandoned, and newspaper articles go unwritten. Journalism in particular is negatively impacted by these extreme delays. When current events necessitate a look back, journalists rely on being able to discover how earlier presidents handled similar events. Without access to this valuable perspective, these stories cannot be told.

For example: the current shutdown. The federal government has been shut down many times, none more famously or recently than two times during the Clinton Administration, in 1995-1996. The public should have access to records from almost twenty years ago, to examine how these same issues were handled, spun and resolved. By chance, some of the records are in fact available, and are even posted online -- but only because of the importance of the records’ creator.

U.S. Supreme Court Justice Elena Kagan, who last year voted to uphold the Patient Protection and Affordable Care Act -- opposition to which is the cause of the current federal government shutdown -- was a key point person in the Clinton Administration for the 1995-1996 shutdowns. Records from the website of the William J. Clinton Presidential Library1 detail then-Associate White House Counsel Kagan’s role in many aspects of the shutdown, including lawsuits2 brought by federal employee unions3; the possible use of the Judgment Fund to pay federal employees who were performing emergency functions4; the implications of the Anti-Deficiency Act (including how to “defeat/get around” it5); the mechanisms involved in shutting down agencies and what government functions may continue6; determining whether Executive Branch officials could appear as Congressional hearing witnesses (and what they might discuss); and how President Clinton could voluntarily defer his salary7.

Most of the same issues from eighteen years ago are still being debated today, and the historical perspective would be instructive. In the current shutdown, dozens of Members of Congress have announced they will forgo their salary until the government is reopened; as of this writing, President Obama has not made any statements about his own salary. In 1996, Ms. Kagan worked on the salary deferral issue for President Clinton. Using an initial draft8 from a colleague at her former law firm, Williams & Connolly, Ms. Kagan developed an Escrow Agreement for President Clinton to “decline the benefit of his usual compensation as President of the United States time as Federal workers are furloughed as a result of disagreement over the Federal budget.”

Ms. Kagan’s work related to the shutdown -- research, analysis, discussion of solutions and alternatives -- is non-controversial, and appears to be standard Associate Counsel responsibilities, much like the work that attorneys throughout the government are performing today. That researchers have access to these records at all is the more remarkable part of this story.

Currently, all federal presidential libraries run by the National Archives are closed -- museums, research rooms, and all public functions. Except, that is, for websites, which is how I was able to access these records. It shouldn’t require a crisis such as this to demonstrate the importance of digitizing valuable federal documents, particularly ones that so many historians and other researchers are clamoring for (most of whom cannot travel to Abilene and Ann Arbor and Atlanta and Austin and … Yorba Linda in order to view). However, for the records to be digitized, they must first be processed and opened -- which is estimated will take one hundred years

It is probable that only because of her 2010 confirmation hearings Justice Kagan’s White House records are available online; like the records in the Reagan and two Bush libraries, the majority of the tens of millions of records housed in the Clinton Library have yet to be opened.

In the libraries dedicated before the Presidential Records Act created the enormous backlogs we see today, most records have been processed and are open. With the notable exception of the John F. Kennedy Library, though, only a fraction of what is available to in-person researchers has been digitized and placed online (the Kennedy Library recently undertook a project to digitize and post online its entire holdings).

In the libraries of the four most recent presidents, the processing delays resulting from compliance with the 1978 law -- the one that was supposed to speed access to presidential records but inadvertently did just the opposite -- mean that relatively few records are available and even less are online.

This situation is not a result of decisions made by any of the libraries or the National Archives, but because of the unintended consequences of the laws. Reform of both the Presidential Records Act and the Presidential Libraries Act is vital to preserving and making available our country’s history, and is a key part of my upcoming book, The Last Campaign: How Presidents Rewrite History, Run for Posterity and Enshrine Their Legacies.

2 The main entry point into the Kagan files contains links to eleven boxes of records dealing with the two shutdowns in 1995-1996.