The Untold Origins of the Cuban Missile Crisis

Jack Coulhoun is an independent historian of the Cold War. He received his PhD from York University in Toronto in 1976. His work has been published by the Washington Post, Toronto Star, Christian Science Monitor, The Nation, The Progressive, National Catholic Reporter, In These Times, and Covert Action Quarterly. He was Washington bureau chief of the Guardian newsweekly from 1985 to 1992. 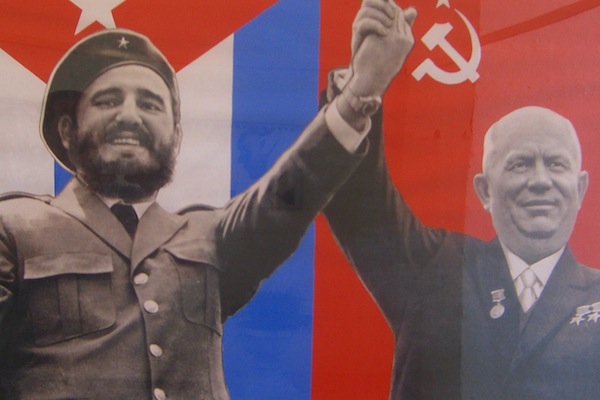 In Moscow, Chairman Nikita Khrushchev received fragmentary intelligence reports on Operation Mongoose. Khrushchev’s son Sergei writes, “Information came through secret channels about President Kennedy’s adoption of a wide-ranging plan, ‘Mongoose,’ to destabilize the situation in Cuba.” The younger Khrushchev adds, “Every day the Cubans expected a new invasion, this time not just by emigres but by the U.S. Army.”

The KGB was also picking up intelligence about large-scale U.S. military exercises rehearsing an invasion of Cuba. KGB Chief Vladimir Semichastny wrote in a February 21, 1962 report, “Military specialists of the USA had revised an operational plan against Cuba, which according to the information, is supported by President Kennedy.” The new KGB chief stated U.S. Army and Navy personnel would “be supported by military air assets based in Florida and Texas.”

In Washington, the Navy Commander-in-Chief, Atlantic (CINCLANT) issued planning directives for U.S. operational plans (OPLANs) for an invasion of Cuba in a February 14, 1962 telegram. OPLANs 314-61 and 316-61, joint Army, Navy, Air Force, and Marine Corps operations, were detailed plans for an amphibious landing of ground forces supplemented by air strikes. OPLAN 316-62 included a ground combat force of 150,000 troops. The Pentagon estimated that it would take ten days of heavy combat and 18,500 U.S. casualties to drive the Cuban revolution from power with an occupation of the island to follow.

In spring 1962, the United States conducted military exercises to test the readiness of its Cuba OPLANs with a series of military maneuvers in the Atlantic Ocean from North Carolina to the Caribbean Sea.

In April 1962, Chairman Nikita Khrushchev was in Bulgaria on a state visit. But his thoughts were thousands of miles away in the Caribbean. He worried that the United States was preparing to invade Cuba, and was preoccupied with defending the Cuban revolution.

The idea of deploying Soviet missiles to Cuba came to Khrushchev as he strolled along the Black Sea in Varna, Bulgaria with Defense Minister Rodion Malinovsky. Malinovsky pointed to Turkey across the Black Sea, noting the U.S. Jupiter missile base there. Intermediate-range Jupiter missiles could reach targets in the Ukraine and southern Russia within a matter of minutes. Khrushchev asked why the Soviet Union did not have the right to deploy missiles to Cuba as the United States did in Turkey. He was convinced that the presence of Soviet missiles in Cuba would deter a U.S. invasion of Cuba. Back in Moscow, Khrushchev pressed Malinovsky again: “What about putting one of our hedgehogs down the Americans’ trousers?”

This time, however, Khrushchev made a strategic argument. He pointed out that the installation of missiles in Cuba would also augment the Soviet Union’s strategic nuclear force.

He elaborated, “According to our intelligence we are lagging almost fifteen years behind the Americans in warheads. We cannot reduce that lead even in ten years. But our rockets on America’s doorstep would drastically alter the situation and go a long way towards compensating us for the lag in time.” Soviet intermediate-range ballistic missiles in Cuba would be capable of striking targets deep inside the United States, including New York and Washington.

The Kremlin was acutely aware of the margin of U.S. superiority over the Soviet Union in strategic nuclear weapons. According to Anatoly Dobrynin, the USSR’s ambassador in Washington, the USSR had 300 nuclear warheads compared to a U.S. arsenal of 5,000 warheads for intercontinental ballistic missiles (ICBMs) and B-52 bombers with an intercontinental range in October 1962. Khrushchev discussed his plan to deploy Soviet missiles to Cuba with only a handful of Soviet leaders.

Khrushchev consulted Foreign Minister Andrei Gromyko about his missile deployment plan. “The situation forming around Cuba at the moment is dangerous,” Khrushchev said. “It is essential that we deploy a certain quantity of our nuclear missiles there for its defense, as an independent state.” Gromyko responded, “I have to say quite frankly that taking our own nuclear missiles to Cuba will cause a political explosion in the United States.” Khrushchev dismissed Gromyko’s warning. Instead, he sought the counsel of Anastas Mikoyan, a veteran member of the Presidium and his closest associate.

Khrushchev later wrote, “Comrade Mikoyan expressed his reservations.” Khrushchev continued, “His opinion was that we would be taking a dangerous step ... This step bordered on adventurism. This risk lay in the fact that in wanting to save Cuba, we could be drawn into a very terrible and unprecedented nuclear missile war. That had to be avoided by every possible means, and to consciously provoke such a war would really be dangerous.”

Khrushchev would not be deterred. On May 24, 1962, the Presidium met to consider Khrushchev’s missile deployment idea. According to the minutes of the meeting, the Presidium gave “full and unanimous approval of enterprise ‘Anadyr’ (subject to receiving F. Castro’s agreement).” KGB officer Alexandr Alexiev was summoned back to Moscow from his post in Cuba. When Khrushchev informed him that he would return to Cuba as the new Soviet ambassador, Alexiev was puzzled, because he was not a diplomat. Khrushchev explained, “What is important is that you are friendly with Fidel, with the leadership.” He noted, “And they believe in you, which is the most important thing.”

Khrushchev added, “Comrade Alexiev, to help Cuba, to save the Cuban revolution, we have reached a decision to place rockets in Cuba.” He asked, “What do you think? How will Fidel react? Will he accept or not?” Alexiev said he thought Castro would reject the missiles because they would compromise the independence of the Cuban revolution. Khrushchev responded, “There’s no other way for us to defend him.” He continued, “The Americans only understand force. We can give them back the same medicine they gave us in Turkey. Kennedy is pragmatic, he is an intellectual, he’ll comprehend and won’t go to war...”

The success of Khrushchev’s [ill-fated] exercise in Soviet missile power was predicated on presenting President Kennedy with a fait accompli. The Soviet “hedgehogs” would be installed in Cuba while Washington was preoccupied with the November 1962 congressional elections. Khrushchev would tell Kennedy about the Soviet missile deployment after the elections, when the missiles would be fully operational. Khrushchev [was confident] that Kennedy would not launch U.S. military strikes against the missile sites, because he could not be sure of taking out all of the missiles. He reasoned that Kennedy would grudgingly accept the missiles in Cuba as an alternative to nuclear war with the Soviet Union.

In June, Alexiev returned to Cuba with a delegation from the Soviet Union, including Marshal Sergei Biryuzov, head of the Strategic Rocket Forces, and Politburo member Sharaf Rashidov. When the delegation met with Fidel Castro, the Soviets discussed the international situation and the possibility of a U.S. invasion of Cuba. Marshal Biryuzov asked Castro what he thought would deter U.S. military intervention. Castro replied, “If the United States knows that an invasion of Cuba would imply war with the Soviet Union, then, in my view, that would be the best way to prevent an invasion of Cuba.” Castro wanted a formal Cuba-USSR defense pact.

The Soviet delegation insisted that only Soviet missile power could prevent U.S. intervention. The Soviets said the missiles would also enhance the power of the USSR and the Socialist bloc of nations. Castro responded, “If making such a decision is indispensable for the socialist camp, I think we will agree to the deployment of Soviet missiles on our island.” But he wanted to consult with his closest colleagues before making a decision about the missiles.

The next day Alexiev met again with Castro, who was joined by Che Guevara, President Osvaldo Dorticos, Carlos Rafael Rodriguez, and Blas Roca. Guevara stated, “Anything that can stop the Americans is worthwhile.” The Cubans approved the broad outline of the missile deployment plan. The details would be negotiated later in Moscow. The idea that Soviet missiles in Cuba would make the Socialist bloc stronger appealed to the Cuban revolutionaries. It also tempered their concern that the missiles would compromise the independence of the revolution.