Why is the World War II Memorial at the Center of the Shutdown's Political Theater?

Samuel J. Redman is assistant professor of history at the University of Massachusetts, Amherst. 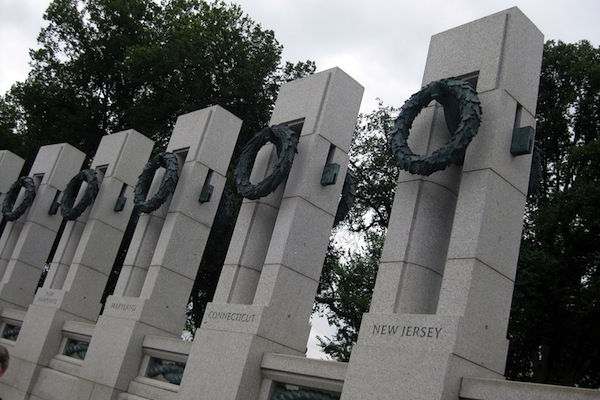 In the days following the October 2013 government shutdown, streams of veterans passed through barricades and walked through the grounds of the National World War II Memorial. The memorial is managed by the National Park Service, a federal agency mostly shuttered during the recent political budgetary battles that led to the shutdown of the federal government. Students in a recent meeting of Introduction to Public History -- an undergraduate course here at the University of Massachusetts, Amherst -- considered how historical monuments and memorials emerge as political tools shaped by the evolving contexts and discourses of the day. The National WWII Memorial, students suggested, became the most prominent flashpoint in the political rhetoric surrounding the recent federal shutdown and budgetary crisis because “The Greatest Generation” and Second World War are often positioned as nostalgic icons of the United States of the mid-century. The post-war era, popular memory suggests, was marked by the nation’s global ascendancy to world superpower. The era also represented perceived social and political unity, economic affluence, and confidence in government to confront challenges and solve problems. In a way, these ideas become manifest in the memorial to the war that sits prominently -- indeed, erected as a tangible symbol of remembrance -- on the National Mall.

Historical monuments and other sites of cultural memory such as battlefields, historic houses, and historical reenactments occasionally emerge as important contact zones between contesting factions of our society. These factions work to cloak their own political sentiments in charged rhetoric about the past. But why the National World War II Memorial, I asked our group, and not one of the many other monuments or historical site in Washington D.C. or beyond? Other locations, such as the Liberty Bell and battlefield and massacre sites have also witnessed heated contests over the nature of their memorialization in recent years -- what, then, imbues a particular monument with performative symbolism in a particular time? Referring to recent events on the National Mall, students pointed to the visual or aesthetic appeal of the WWII monument as an relatively prominent and open space. Also important are the advanced ages of the veterans allowing for greater emotional connection, the proximity of the monument to Capitol Hill where important political decisions are made, and the nature of the media spectacle as possible influencing factors.

As a class, we watched and read as elected officials used the shutdown as an opportunity to blame their political opponents, and students pointed out obvious logical flaws in the rhetoric espoused by the politicians. Students in the class confronted the contested and hardening divisions in our political culture and argued that nostalgia for wartime unity serves to stand in sharp contrast to today’s disputatious Congress and larger political climate.

The nearby Vietnam War Memorial and Korean War Memorial, students suggested, were absent in recent protests for several illuminating reasons. In a context of a crisis in Syria and in the lingering response to conflicts in Iraq and Afghanistan, the so-called “Good War” continues to serve as convenient rallying points for international and domestic political agendas.

But who pays to clean up the litter that occasionally appears on monument grounds, especially after a large gathering of people? Who collects the mementos and memorials left behind at spaces such as those along the National Mall? What happens when we lose the educators and interpreters that make history come alive at these places, cancelling tours and shuttering museum lobbies?

Nearly 800,000 federal employees -- including the staff of agencies that maintain many of our nation’s most cherished monuments and historic sites, the National Park Service -- have been furloughed. Meanwhile, members of Congress continue to be paid during the government shutdown.

The shutdown helps reveal how truly consequential (and at times contentious) museums, monuments, and historic sites are for our society. The shutdown also reveals, however, that this deep and frequently contested meaning over past events is sometimes extended into the present and manipulated as a political tool. Monuments to past events can be manipulated into political tools serving our contemporary needs and desires. These events frequently smooth over the more difficult aspects of past events, simplifying their meaning to create lasting popular impressions. Learning to think critically about the nature of the events as they have occurred in the past make us better aware of the dynamic meaning of these incidences as they unfold in our world. These events remind us that history is indelibly part of the present, so much so that it continually becomes critically enmeshed within the contexts of the social, cultural, and indeed political questions of the day.

This contest over history extends beyond just scholarly literature, creating fraught meaning in American history as it appears in public culture. If the past is indeed present, students at the University of Massachusetts are learning to critically consider the implications of its contested meanings in spaces outside of the classroom.