How to Fix Congress? The States Should Propose a New Constitutional Convention. 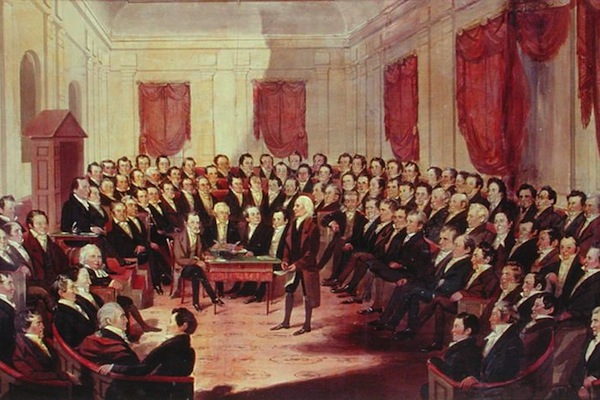 A fine state of affairs -- when a fanatical minority in one party in one house of Congress can ruin things for all of the rest of us by shutting down the government. The current crisis -- a manufactured crisis -- is the latest in a series, and the trend will go for as long as the Tea Party is allowed to succeed at political extortion. Their aim is to wreck the federal government as much as they can by slow degrees.

No matter how and when the current breakdown is fixed, there’s a larger issue: this should not be happening. There’s something wrong with the system when routine legislative business is this excruciating. And the challenges in this century that the United States and every modern nation will be facing require us to break the power of the shrill anti-government minority that is currently bogging things down with its childish oversimplifications and blackmail tactics.

Congress is broken and cannot fix itself, for which reason we need a different remedy. A higher law-making process -- an amendment to the federal Constitution -- should frame a new procedure for Congress that will force open votes without partisan delays and shenanigans.

The procedure for amending the Constitution would appear to depend upon Congress -- which is unfortunately the very source of the problem. All previous amendments to the Constitution have been proposed in, debated by, and eventually passed by two-thirds supermajorities in each house of Congress, followed by ratification by three-quarters of the states. This procedure is stipulated in the Constitution itself.

But the Constitution, in Article V, provides an alternative method that has never been used. The Constitution stipulates that if and when the legislatures of two-thirds of the states petition Congress to call a convention for the purpose of drafting a constitutional amendment, Congress “shall” summon the convention.

Perhaps it’s time for some concerned lawmakers at the state level to launch this process. It will naturally take some time. But if national reform movements on issues that span the ideological spectrum can carry on for decades in their quest to achieve their objectives, a movement to make this nation simply governable should be given its chance.

If Congress should decline to summon the convention when two thirds of the states have demanded it, the remedy is simple: some state attorneys-general could ask the Supreme Court to construe the meaning of “shall” in Article V.

The nation will be much better off if we begin this process soon.