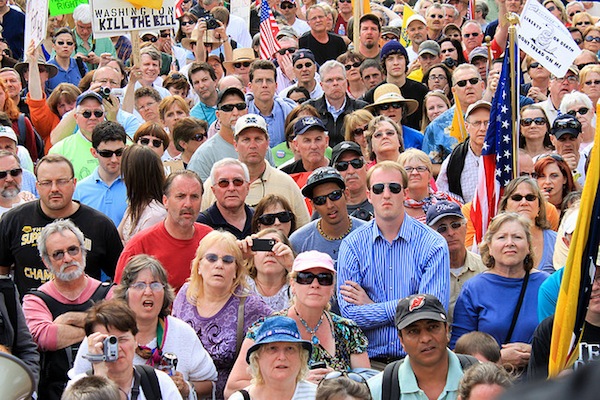 Ask Tea Party adherents what inspires them most and many will say their reverence of history. Indeed it's not unusual at Tea Party rallies to see bands of self-referential patriots dressed up in Revolutionary War garb, wearing tricorn hats and carrying their defiant Don't Tread on Me flags.

But there may be a more appropriate historical analogy for the Tea Party movement: the Luddites, who traveled around northern England in the early Nineteenth Century smashing and destroying the machinery of the emerging industrial age. Whatever their grievances at the time, historians view their anger as a reaction against change and an unwillingness to accept a world that was passing them by.

We live in a media culture that magnifies conflict and breathlessly interprets every pitched battle as a sign that our nation is irretrievably divided and can't be healed. But perhaps a longer historical perspective may be a better lens to view our current political rift, and that's where the Luddite comparison applies.

Rather than see the Tea Party's divisiveness as a sign of politics to come, it may simply be the final spasm of rage for an increasingly shrinking cohort of citizens who refuse to accept that our culture and country no longer resemble the "real America" embedded in their historical imagination -- the churchgoing, picket fence, Norman Rockwell, pre-60s society in which everyone knew their place, father knew best, and few challenged the social order.

Whether that America ever existed is certainly open to debate, but what's clear is that it no longer exists today, there's no turning back, and as with so many cultural movements that claim to represent a golden age, history will pass them by and their relevance will diminish.

Now that doesn't mean they won't continue to disrupt and distract us from the march of history, as they are doing today with the government shutdown and threat of default. Nor should they be trivialized as a political force given their over-representation in Congress, a result not of national preference but of gerrymandering and the way congressional districts are drawn.

But they are the wave of the past, not the future, and in time their voices will fade to a loud whisper and their machinations will be seen as more curious than relevant.

Much like the viewers of FOX News Channel, Tea Party advocates skew old, and that alone is the best indicator that their influence is short-lived at best. Virtually every survey of younger Americans -- the new and emerging generation known as the Millennials -- documents that they categorically reject the Tea Party worldview and perspective.

Whereas the Tea Party takes a hard line on immigration that borders on xenophobia, most Millennials embrace the immigrant pursuit of the American Dream and overwhelmingly favor policies that open pathways to citizenship.

Whereas the Tea Party hails from mostly monochromatic communities that mirror the white dominance of generations past, Millennials are the most inclusive, least prejudiced, most diverse, and what one writer called the most "accepting" generation in our nation's history, and they fear not what makes most conservatives cringe -- that America will become a majority-minority country by mid-century.

Whereas the Tea Party recoils at gay rights -- one poll shows that 84 percent of Tea Party supporters oppose gay marriage -- surveys of Millennials find that upwards of 80 percent support marriage equality, and even a plurality of young Republicans favor it.

Whereas many in the Tea Party ground themselves in conservative Christianity, only 17 percent of Millennials call themselves religious conservatives, by far the smallest percentage for any generation, according to the Public Religion Research Institute. In part because they view religious moralists as divisive and unseemly, Millennials are fleeing organized religion -- a third of adults under 30 have no religious affiliation.

Tea Partiers deride climate science; Millennials embrace it. Tea Partiers pray at the altar of free market ideology; Millennials sympathize with the impulse behind the Occupy movement and more than seven in ten want politicians to address income and wealth inequality.

Even younger conservatives who prefer limited government grow nervous with the Tea Party's rage against diversity, gay rights, and environmental protection. In a July 2013 Pew survey, those 18 to 29 were the only Republican age cohort to reject the Tea Party message -- and by a significant number.

Perhaps no one better symbolizes the generally diverse and progressive Millennial America than the president so many young people supported and helped to elect -- Barack Obama. Denying Obama's legitimacy -- even denying he was born in America -- embodies the Tea Party's unwillingness to accept that America has changed.

If the Tea Party represents a particular state in America, it's the state of denial -- they refuse to believe that their America is no longer the "real America." Or as Senator Ted Cruz defiantly said in response to recent surveys that show massive public displeasure with the GOP and the Tea Party, those polls are "not reflective of where the country is."

But once the political torch is passed to a new generation, there will be fewer and fewer hardcore Tea Party districts, fewer supporters of Tea Party candidates, fewer of them elected, and far more acceptance of an America written in the image of the Millennial worldview. Our country will move beyond their anger and fear, just as it has done on race, gay rights, and countless other issues.

To be sure, it may not make today's toxic political culture any easier to endure. But it should give pause to the doomsayers who say our democracy is broken and the future will be forever bleak.

Those who mistake the tantrums of today for the society of tomorrow ought to remember the lessons of yesterday. The Luddites faded and life moved on.