A Tale Worthy of Poe: The Myth of George Bateson and his Belfry

Jeremy Stern is an independent scholar and educational consultant. He received his PhD from Princeton University. 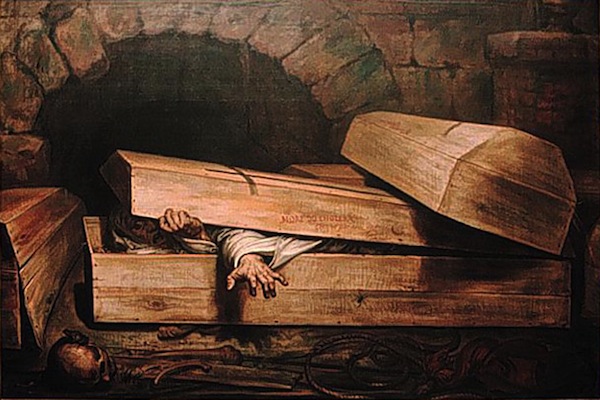 “Edgar Allan Poe: Terror of the Soul” has just opened at New York’s Morgan Library and Museum. The exhibit is part of a larger effort -- especially since his 2009 bicentennial -- to rehabilitate Poe as a major American writer, more than just a mere teller of lurid and shocking tales. The Morgan’s curators particularly emphasize Poe’s marked influence on later, highly-respected authors in Britain and the United States. Yet, at the same time, any exploration of Poe must delve into his strange and macabre creations. The show’s timing, opening just a few weeks before Halloween, is surely not coincidental.

The morbid darkness of Poe’s writings owes much to his own psyche… but it also draws heavily on the cultural preoccupations of his day. The Romantic focus on early and tragic death, the horrors of madness, murder, and perversity -- all reflect very real Victorian fascinations on both sides of the Atlantic.

One of the most characteristically Victorian fixations was the fear of premature burial. Its occurrence in Poe is notorious, particularly in his story of that title -- but it reached far beyond him. Such fears were hardly new to the Victorians, and to some degree they persist even today. But, with medical knowledge hovering between folklore and science and the nature of physical death far from understood, the Victorians seem to have taken the anxiety to new heights.

Accounts of this horrifying yet fascinating fear commonly describe the “escape coffins” reportedly sold in the nineteenth century to allow those mistakenly declared dead to save themselves at the last moment. The most popular of these, it is often said, was the cheap and simple “Bateson’s Belfry,” a bell mounted on top of a casket with a string running to the corpse’s hand within… so that, if the “deceased” suddenly awoke -- before burial but in an extremely unwelcome predicament -- he could instantly and easily summon help.

The striking life-story of the inventor George Bateson is also often invoked. In 1852, he patents the belfry as the “Bateson Life Revival Device.” Rising rapidly to fame and fortune, he receives the OBE from Queen Victoria in 1859. But, obsessive fear of premature burial gnawing at his own mind, he designs ever more complex alarm systems for his own coffin, finally insisting his family have him cremated. In 1868 (transposed to 1886 in some accounts), he panics his instructions will be ignored, douses himself in linseed oil and incinerates himself.

Positively dripping in Victoriana, satisfyingly redolent of Poe’s dark tales, the Bateson story has made many appearances, continuing to feature in popular books, historical web sites, and even the occasional news article. Earlier this year, it inspired a prize-winning graphic novelette.

Where, then, did this story come from, and why has it been so widely accepted? The tale first appears in Michael Crichton’s skillfully constructed 1975 pseudo-historical novel, The Great Train Robbery. Crichton excelled at blending reality and fantasy under a pseudo-documentary veneer. (In his classic Andromeda Strain of 1969, he even appended four pages of fictional citations to believably technical books and articles on which his account was purportedly based.) In The Great Train Robbery, his picture of 1850s Britain seamlessly blends genuine snippets of historical background, heavily fictionalized fact (the novel is based, extremely loosely, on a real 1855 robbery), and outright invention.

It’s often far from obvious which stories are historical and which are Crichton’s plausible fictions. Crichton’s lengthy asides on the Crystal Palace, the Charge of the Light Brigade, or British reaction to the Indian Mutiny are, for instance, largely factual. Yet other anecdotes, presented with equally confident detail and social color, are not. For example: when Crichton needs a reason for a sudden increase in railway security, he invents an eccentric gentleman, “Sir John Alderston,” who fakes a robbery to avoid handing over a precious case of wine lost to a hated rival in a wager. The long, richly-detailed “Alderston” digression even quotes eight paragraphs from a supposed 1914 biography of the man. But it’s all pure fiction, made up to supply a needed plot twist.

The scheme by the novel’s thieves to circumvent the new security measures centers, in turn, on the “Bateson’s Belfry.” (One thief is hidden in a coffin bound for the guarded luggage van; the sudden ringing of the Belfry creates confusion and deflects a serious search of the coffin.) In another “historical” digression, Crichton lays out the astonishing tale of Bateson himself – from patent and popularity (including credibly verbose quotations from supposed adverts for the Belfry), to OBE, final madness and self-immolation.

When I first read the novel many years ago, I wondered about the Bateson story. Premature burial was a genuine and well-known Victorian anxiety, and the level of detail seemed convincing. But so did the two pages quoted from the non-existent biography of the palpably fictional “Sir John Alderston.” The whole tale seemed, somehow, just too perfectly Victorian to be believable.

Looking about for corroboration, I found no entry for Bateson in the definitive Dictionary of National Biography -- strange for a man of such supposed wealth and prominence. I found him in books on Victorian cultural oddities... but never with any citations to original sources. As the internet boomed, the tale began to appear on historical websites -- but again without citations.

More disturbingly, no account -- either published or online -- ever offered any information that supplemented Crichton’s narrative, or differed from it in any way. Recountings of Bateson’s tale always echo Crichton with remarkable closeness... right down to the specific use of linseed oil in his final self-immolation. Bateson’s adverts for the Belfry are often quoted in such accounts... but the quotes are always the same as Crichton’s: no one ever cites a passage that Crichton didn’t. No one ever reproduces an original advertisement for the allegedly popular Belfry. No one ever cites or reproduces an original newspaper account of Bateson’s highly news-worthy suicide, or an obituary.

A few online skeptics had also noted these problems. Some, more familiar with the British honors system than I am, pointed out a further and fatal problem with Crichton’s account. According to the novel’s detailed digression on Bateson, he received the OBE from Queen Victoria in 1859. But the OBE was instituted by King George V... in 1917.

The story was false. Crichton’s intermingling of history and fiction had blurred the line between them, and many had made the wrong call on the Bateson saga.

The question then became: why had so many fallen into this trap? Crichton’s story is seductively plausible and beautifully captures the Victorian fears immortalized by Poe and other contemporaries. But surely people doing research -- even for sensationalist books and popular websites -- don’t usually look to modern novels as historical sources?

The answer finally came when I happened recently upon Jan Bondeson’s 2001 book, Buried Alive: The Terrifying History of our Most Primal Fear, which includes the Bateson story. Again, all details match Crichton’s -- no differences, no added information. But unlike most such books, Bondeson’s is based on serious research -- and it offers endnotes.

Bondeson cites two sources for the Bateson tale. The first is Crichton’s novel, which in itself is not encouraging: a work of fiction surely should not be footnoted as if it were a work of history. But the second citation is to L.G. Stevenson’s 1975 article “Suspended Animation,” in the prestigious Bulletin of the History of Medicine (vol. 49, 482-511). The tale’s appearance in such a journal goes a long way towards explaining its wide and often unquestioning acceptance.

Following the trail to Stevenson’s article, I did indeed find the Bateson story… once again, with every detail matching Crichton’s account, including the historically impossible OBE. Like Bondeson’s book, Stevenson’s academic article offers citations. The footnote points to Crichton’s then newly-published novel -- and nothing else. In his note, Stevenson mentions “many short accounts... of the genuine fear of premature burial which was so widespread in Victorian society,” but singles out the “recent and somewhat surprising” example in “a novel published in 1975 by Dr. Michael Crichton.” (Crichton, of course, was a medical doctor, not a historian.) Stevenson’s note even quotes Crichton’s paragraph on Bateson’s madness and suicide verbatim, carefully citing the whole account to “Crichton, The Great Train Robbery (New York: Knopf, 1975), pp. 191-94.”

Stevenson, in an otherwise serious piece of academic research, fell into the trap. He took Crichton’s detailed and credible tale, linked to a very real Victorian delusion, as fact -- and he did not inquire further. In so doing, he gave the entirely invented story a respectable secondary-source pedigree, allowing others to further cite and disseminate it... without ever checking for a primary-source basis behind the narrative.

An error in a secondary source can easily be carried into others, and from there into still others, taking on life as academically-acceptable “truth” -- even if nothing lies behind it but a convincing piece of fiction. The same can happen -- and much more easily -- with a historian’s mistaken transcription, misattribution, or other error. It’s a cautionary tale. You can’t assume something is true just because you saw it in print.

Bateson resembles the obsessively fearful protagonist of Poe’s “The Premature Burial” -- and he was no more real than Poe’s creation. Just to add to the irony: even as many have taken the Bateson tale at face value, Crichton’s little joke has been starting us in the face all along. For the fictional Mr. Bateson of the fictional Bateson’s Belfry died in a fit of madness. Clearly, he did have bats in his belfry.