The Age of the Drone

Lloyd C. Gardner is a diplomatic historian. He is the Charles and Mary Beard Professor of History at Rutgers University, where he has taught since 1963. A specialist in twentieth-century foreign policy, Gardner has held several national fellowships, including two Fulbright Professorships in England and Finland, and a Guggenheim Fellowship. He is author or editor of sixteen books on American foreign policy ̶ his newest is Killing Machine: The American Presidency in the Age of Drone Warfare (The New Press, November 2013) 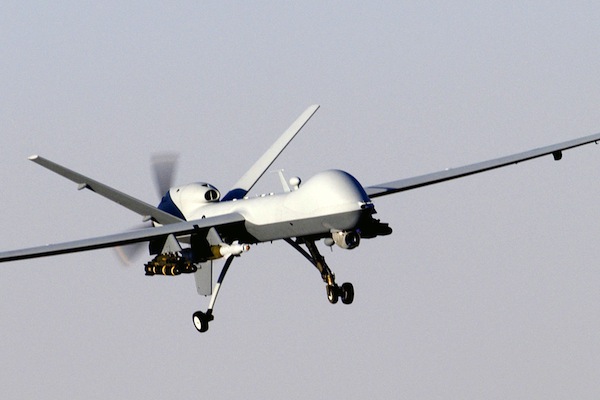 Hamid Karzai is at it again. We have heard all his complaints about the coalition before, and there is nothing new in what he is saying. But this time he is publicly setting forth his supposedly final offer in regard to the post-2014 security arrangement -- if there is to be one -- with the United States and its allies. He may back down, but that is unlikely. What Karzai wants is for the United States to sign a pact with Afghanistan that would be the equivalent of membership in NATO. He also wants the United States to stop attacking the remaining al Qaeda members in Afghanistan, and give him and his successor the intelligence to do the job itself. What the United States should do is concentrate its special ops and drones on enemy strongholds in Pakistan, and leave Afghan villagers alone. He also refuses to give American troops legal immunity, the reservation that sunk any Iraqi-American long term security pact.

As for the Taliban, he says he is now undertaking negotiations. When the possibility of negotiations with the Taliban came up in the wake of the raid that saw Osama bin Laden removed from the scene, Karzai accused the United States of opening bilateral talks behind his back. Washington, he feared, was working around him in the way it treated Vietnam’s President Thieu in the last days of what was then America’s “Longest War.” Now it is Afghanistan.

Both sides in this dispute have a lot at stake. Like other new American “allies” since the end of the Cold War, Afghanistan has become dependent on the flow of dollars into its economy. Karzai tries to shift blame for the endemic corruption of his regime on the behavior of American “contractors” in their dealings with locals, and there is a good measure of truth in his accusations. But it is very likely that Afghanistan will fall back into a state of civil war -- or better put, civil wars -- without this aid. For the United States, a key question is how near chaotic conditions in Afghanistan will play out amongst the rivals for influence across the whole region. Billions of dollars have been pledged to aid in Afghanistan’s reconstruction -- but that was also the case in 2001 when the United States and its coalition partners established the Karzai regime and left Afghanistan high and dry.

President Obama, meanwhile, has referred to the stalemated security talks in tones that warned of future attacks inside Afghanistan, no matter what official security relationship finally evolved out of the noisy public discussions between Kabul and Washington. In the immediate aftermath of two raids carried out by SEAL teams in Libya and Somalia, one a success the other a failure, the president said in an interview with the Associated Press, “If we can’t [come to an agreement], we will continue to make sure that all the gains we’ve made in going after Al Qaeda we accomplish, even if we don’t have any U.S. military on Afghan soil.”

What he was talking about, presumably, was the re-initiation of drone strikes against suspected Al Qaeda individuals or gatherings. Drone warfare has never really stopped, of course, though it has been upstaged for the moment by developments in the Syrian chemical warfare story, and the Iranian diplomatic offensive. It has been waged in two ways, direct targeting and so-called “signature” strikes against groups suspected of meeting to plot terrorist acts. Washington’s purpose in warning about its willingness to secure its “gains” made against Al Qaeda has always been central to the use of the pilotless Hellfire weapons, especially signature strikes: intimidation. When counterinsurgency failed yet again in its Afghan test, Obama embraced drone warfare as one of his major weapons, indeed the major weapon, even though it was never quite clear which was the real enemy, the Taliban or Al Qaeda, or, the favorite ally of the Pakistani ISI, the Haqqani network, in the search for influence in a post-American-occupied Afghanistan. Admiral Mike Mullen, chair of the Joint Chiefs, spoke about Washington’s complaints against Pakistan. Specifically, he said, they had repeatedly rebuffed U.S. pleas “to launch a ground operation in North Waziristan, the base of an alphabet soup of militant organizations” that included al-Qaeda and Afghan insurgents such as the Haqqani network.

The trouble with drone warfare was partly it was a new variation on “mission creep,” or, once you have the capability, you can always find an enemy to use it on. Obama’s warning to Karzai follows many years of explaining drone attacks in Afghanistan, Pakistan, Yemen, and other places as legitimate assaults on groups “associated” with Al Qaeda. Aside from involving the United States in endless civil wars, drone warfare is even less useful in the battle for hearts and minds – if that is the ultimate object of foreign policy. We are told that the commander of the failed SEAL raid in Somalia actually considered calling in a Hellfire strike, but reconsidered because of the likelihood of “civilian casualties.” Before going farther down this path, perhaps we should think more generally about what Obama’s fellow Nobel Prize winner, Desmond Tutu wrote in a letter to the editor of the New York Times, on February 11, 2013,

Do the United States and its people really want to tell those of us who live in the rest of the world that our lives are not of the same value as yours? That President Obama can sign off on a decision to kill us with less worry about judicial scrutiny than if the target is an American? Would your Supreme Court really want to tell humankind that we, like the slave Dred Scott in the 19th Century, are not as human as you are? I cannot believe it.