The Kennedys and Martin Luther King 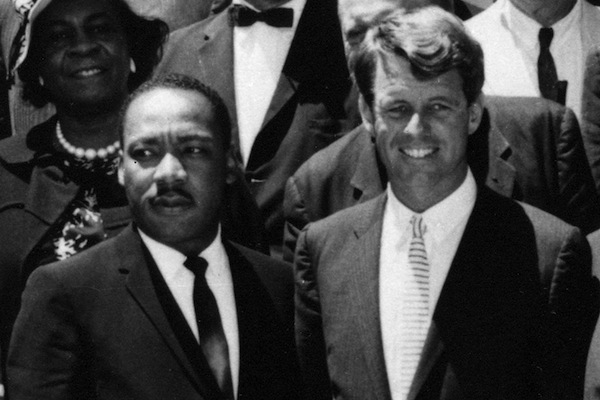 
In a recent piece entitled “JFK Holds Complex Place in Black History”, AP writer Jesse Washington attempts to explain the unique bond African Americans shared with the thirty-fifth president. According to Washington, since his murder in November of 1963, Kennedy has enjoyed a special place in many African American households, pictured prominently in art and iconography with Jesus and the Reverend Dr. Martin Luther King. Although he makes an interesting case for why Kennedy holds this special place, both his conclusions and understanding of John Kennedy’s relationship with the African American community are insufficient.

First and foremost, he misidentifies the popular threesome often depicted in portraits and paintings from the period. As I recall from my own youth during frequent visits to both my grandparents, as well as friends homes, the ubiquitous portrait of Jesus always enjoyed a privileged and separate place. It was not the Christ, but the Kennedy brothers, John and Bobby, who shared space with the Reverend Dr. Martin Luther King. This is significant, as we pause to reflect on the fiftieth anniversary of the assassination of JFK, for in reality it was not John alone, but the Kennedy brothers who shared a special bond with the black community.

As Washington and many of the scholars he interviewed readily admit, few today associate President Kennedy with the more profound victories associated with the civil rights movement. In reality, he proved lukewarm on civil rights. In most cases, he had to be forced into action; he responded too slowly -- for example, to the violence visited upon civil rights demonstrators during the Freedom Rides in 1961 and in Birmingham, Alabama in 1963.

But African Americans who lived through the turbulent decade of the 60s, rarely mention President Kennedy without also referencing his brother. From the time John entered the White House, with Bobby serving as his attorney general, the Kennedys became fixed in the public imagination. In his capacity as head of the Justice Department, Bobby spearheaded much of the action on the civil rights front, but even this does not account for his place on the mantle of many homes.

For it is less what the Kennedys did while in office, but rather the frustration of hope they came to represent in death that defined them for a generation of Americans. In April of 1993, Life Magazine, in an issue dedicated to Bobby and Martin, succinctly captured the other Kennedy’s close association with the leader of the civil rights movement. “Twenty-five years after their deaths,” the caption noted, “we remember what they meant to us – and imagine what might have been.”

The key word here, of course, is “imagine.” In reality, the Kennedys barely lived up to the expectations fairly or unfairly placed on them. In life, the relationship was much more complicated. John and Bobby Kennedy supported civil rights, but it was also the Kennedy administration, prompted by the FBI, that first authorized wiretaps on Dr. King.

In office, John was the master of the political gesture. On the campaign trail in 1960, he raised hopes by intervening on behalf of King while he languished in jail. Like other politicians before him, he pleaded for patience once in office, famously calling for a cooling off period during the Freedom Rides. Notably, he delivered key speeches to indicate the administration’s unqualified support for desegregation in 1963. Though slow, the timeliness of his pronouncements and actions should not be dismissed although his cautious approach to the civil rights revolution taking place perturbed more radical voices within the African American community. Malcolm X was especially critical of Kennedy’s stance on the civil rights bill and later characterized his assassination as a case of “chickens come home to roost.”

In death, however, Kennedy took on the role of martyr, especially after the Johnson administration sought to frame the Civil Rights Act as a tribute to the slain president, helping to solidify his place in the movement’s greatest legislative victory.

It was in the wake of on the MLK assassination in April of 1968 that Bobby Kennedy emerged as the nation’s new dreamer. His strong identification with the poor and disaffected boosted his popularity among African Americans. His decision to seek the Democratic nomination for the presidency once again raised expectations.

His assassination, eighty-one days into the campaign, sealed the place of the Kennedys American history. In death, especially in the African American community, the brothers were elevated to the rank of martyrs, bookending King.

In death, King and the Kennedys remain important symbols of the power of hope and the promise of a just democracy.

Even today, Bobby Kennedy’s powerful affirmation of hope as a pathway to justice is often commemorated during Martin Luther King Jr. Day. “Each time a man stands up for an ideal, or acts to improve the lot of others, or strikes out against injustice,” Kennedy explained in 1966, “he sends forth a tiny ripple of hope.” Those “ripples” he concluded” build a current which can sweep down the mightiest walls of oppression and resistance.” It is the ripples of hope that the lives of each of these men, imperfect as they were, represent for African Americans and why for so many years they have shared a privileged place in the hearts and minds of so many.