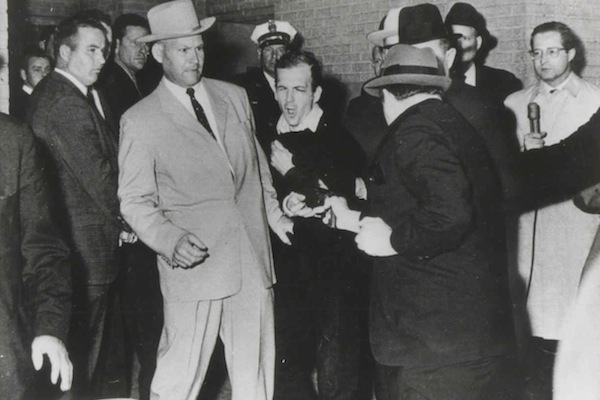 Witnessed by the World is the story of a producer and writer who try to stitch together old and new information to discover who ordered jack Ruby to shoot Lee Harvey Oswald, who two days earlier, on November 22, 1963, assassinated President John F. Kennedy in Dallas. It is one of the seemingly endless plays, movies and documentaries on the murder of the President tied to the 50th anniversary of his death.

The drama, by Ronnie Cohen, starts with the premise that Ruby was part of a far flung Mafia plot to murder Bobby and Jack Kennedy. Bobby, Cohen claims, stayed in Washington. D.C. that day and so Oswald could only shoot the President. Cohen argues that Ruby did not act alone and that his back story also involves mob plans to kill Fidel Castro earlier in the year.

The idea of discovering something about the mysterious Ruby, the 46 year old Dallas night club owner who killed Oswald on national television in the middle of a parking garage jammed with hundreds of police and news reporters, is tantalizing. Ruby lived ten years after he was sentenced to death for slaying Oswald and did not reveal anything about his motives or connections in all that time, except to mutter to a reporter that he was part of a plan to overthrow the government with no details.

According to Cohen’s play, after failing to kill Castro, Ruby was given a chance to redeem himself in the mob’s eyes by shooting Oswald, their triggerman in the slaying of JFK. It is a small conspiracy. The larger conspiracy, believed by many, is that the mob was behind the execution of the President because he and his brother, the Attorney General, were cracking down on organized crime.

Cohen’s plot is simple. Magazine reporter Joan Ross (well played by Charlotte Maier) convinces movie producer Ira Basil that Ruby might have been connected to the mob. Basil then agrees to write a script with her. He gives Ross free reign and she travels throughout California talking to people who knew Ruby, including his aging sister Eileen. The sister gives her a large envelope that has a mysterious safety deposit box key in it.

At the same time, Joan’s friend Aaron, being squeezed by the mob over his business, tells Joan that the gangster leaning on him knows an elder mob leader who knew Ruby in Dallas. Joan is intrigued and she wants to meet him. For her, all the pieces are falling into place.

The play opens slowly and moves along quietly until the halfway mark. Then, with moody music as backdrop, the pace of the play suddenly picks up. It dies rapidly, though. You pretty much figure out the end of the play at that point and it is disappointing. Playwright Cohen never proved anything (if, in fact, anything could be proved).

The real weakness of the play, a gem for conspiracy theorists, is that there is not much information on Ruby, other than that he was Jewish and may have had mafia connections. Much in the play was known already. He was born Jacob Rubenstein, served in the army in World War II and managed different night clubs and strip clubs in Dallas, where he met gangsters and numerous police officials. You do not learn a thing about how he sneaked past guards to shoot Oswald, where he got his gun and, most of all, why he decided to kill the assassin, ruining any chance law enforcement officials had to pump information out of Oswald about any other colleagues. There is little in the play about Ruby’s night club or his friends. Why did he do it and did he think he would somehow get away with the shooting? Did he know lower level mob types who had drinks at his club? Why unknown little Jack Ruby instead of some professional mob hit man? We learn next to nothing about Ruby in the entire play and that is a shame.

Furthermore, intriguing conspiracy information that has been known for years was left out of the play, such as the fact that while he was in Cuba, Ruby may have met with mob big wig Santo Trafficante, who was reportedly connected to the mob’s vast casino empire in Havana. None of the statements by people, and reporters, that Ruby knew a lot of gangsters, not just a few, were left out, too. Incredibly, Ruby’s much publicized assertion that prison doctors injected him with cancer cells, that eventually killed him, was not mentioned, either.

Or was all of that just speculation? Last week, there was a television story on Ruby’s niece, a little kid when he shot Oswald. She has a collection of hundreds of letters to and from Ruby and dozens of others. They do not seem to point to much.

Director Karen Carpenter did a fine job of moving the play along, and that was admirable because at times this play was as tedious. She received fine work from actors Maier, Bob Ari as Joan’s friend Aaron, Max Gordon Moore as the producer, Joe Tapper as mob tough guy Joe Capano and Lois Markle as a fine Eileen Kaminsky, Oswald’s sisters.

After 90 minutes of high flying conspiracy theory, though, even bringing in the bizarre suicide of journalist Dorothy Kilgallen shortly after she interviewed Ruby in jail, this play does not tell you much that you did not know about Ruby or the Kennedy assassination. It is unconvincing.

Was there anyone besides Oswald who shot John F. Kennedy We’ll probably never know.