The Nazis, the Haganah and a Feisty Dr. Ruth 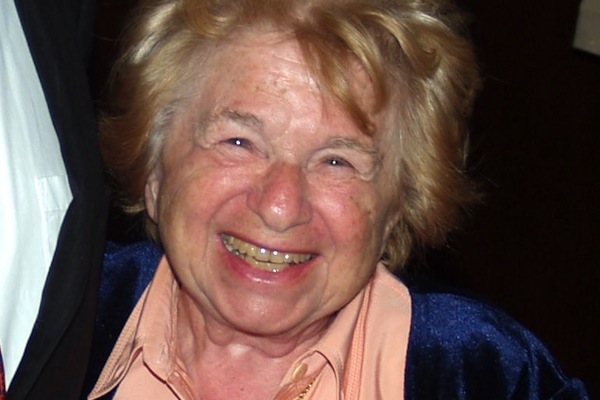 Say “Dr. Ruth” to just about anybody and they will smile widely and tell you that she is the tiny, 4’7”, crazy television and radio sex therapist with the thick German accent.

America’s most lovable sex guide, though, led a harrowing life that involved Nazi concentration camps, the extermination of her parents, a flight to Switzerland as a child, work as an Israeli sniper, and getting blown up with the Haganah, the paramilitary unit in post-war Palestine.

In the 1980s, as a sex therapist, she shot to fame in a successful television show that lasted several years. She made hundreds of appearances on late night talk shows on which the doctor beamed that memorable smile and told scandalous tales about naked men hiding behind couches.

The unusual beginning of her life was the Holocaust, that seems to have been forgotten over the years.

When Karola Siegel (Dr. Ruth) was eleven years old, her parents, Orthodox Jews in Frankfurt, Germany, were arrested by the Nazis and taken away. Ruth, 11, wound up as one of 300 children of concentration camp detainees who were deported. She wound up in Switzerland in the winter of 1939; she never saw her parents again.

When World War II ended, young Siegel, a devout Jew, immigrated to Palestine and joined the fierce Jewish freedom fighters the Haganah. She was tiny and hard to see so they gave her a rifle and trainer her as a sniper. One night she and others were victims of a vicious bomb attack. She lost part of her foot in the explosion and was unable to walk for months.

She married an Israeli and moved to Paris with him in 1950. They split and she moved to New York in 1956, where she married, and divorced, husband number two. Later she married Manfred Westheimer, whom she lived with until his death 36 years later.

All of this is chronicled in Becoming Dr, Ruth, a charming, absorbing and yet at times chilling and bone rattling new play by Mark St. Germain that just opened in New York. It stars short, effervescent Debra Jo Rupp as Dr. Ruth in a tour de force performance that is as funny as it is memorable.

The first two thirds of the play chronicle Westheimer’s days in World War II and teenaged years fighting in the Israeli War of Independence. The last third covers her fame as the accidental and very unlikely sex therapist who won the hearts of everyone who listened to her on WYNY-FM radio or saw her on television starting in the 1980s. It is a treasure trove of history, all told through the story of this one small victim of the Holocaust.

Rupp goes into the story of the Holocaust in sickening detail, recalling the night the Nazis ravaged Jewish businesses, Kristallnacht, the Jewish ghettos, the trains and the extermination camps. It is riveting and all the more scalding because the tale is being told by this tiny woman recalling it all as a child. Throughout the play, Ruth goes back to the Holocaust again and again, crying over the death of her parents and sighing in relief that somehow, someway, she was saved and made it to America.

The play is a shuddering look at history in Germany in the late 1930s and the 1940s and the early days of Israel. It is also a rather amusing look at sex later and the way that so many Americans are absolutely obsessed by it.

The story is told by Dr. Ruth in the living room of her New York apartment. Director Julianne Boyd used the living room set designed by Brian Prather well, having Dr. Ruth pick up boxes, look at photos and make phone calls. One person shows are hard to stage and this well-appointed set gives actress Rupp the chance to walk about and keep the show fresh.

Rupp is a whirlwind as Dr. Ruth. She has the accent (Dr. Ruth always called it her German-Israeli-American accent) down perfectly, along with her mannerisms and gestures. She is never better than in the segment where she recreates Dr. Ruth’s fabled radio show and tells the story of the naked couple hiding behind the living room couch when caught in the sex act by their five year old daughter.

The play appears to be winding up as yet another triumphant tribute to a famous TV personality when Dr. Ruth suddenly shows a large photo of three kids on the wall at the rear of the stage. “These are my grandchildren,” she said, looking lovingly at the trio. “Hitler lost and I won.”

You just had to stand up and cheer at that. The symbolism is shocking. There they are, three beautiful kids whom the Nazis could not kill. Good does win out over evil.

People walk into the theater expecting two hours of funny sex stories. They get them, but they also get hours of harrowing history about the Holocaust and the very big victory over it by this very little woman.