George H. Nash is the author of The Conservative Intellectual Movement in America Since 1945, Reappraising the Right: The Past and Future of American Conservatism, and the three-volume The Life of Herbert Hoover. 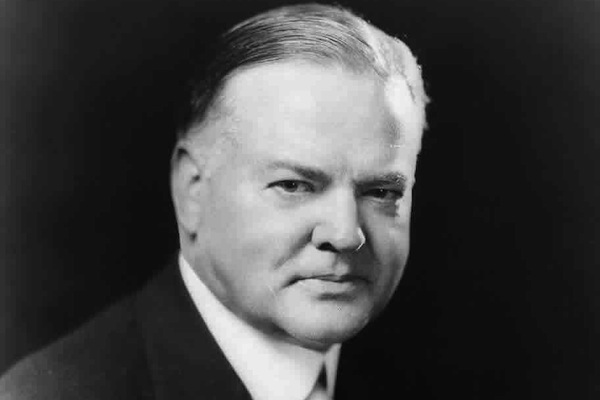 Note by the book’s editor: This introduction is adapted from The Crusade Years, 1933-1955: Herbert Hoover’s Lost Memoir of the New Deal Era and Its Aftermath, edited and with an introduction by George H. Nash, excerpt below (Hoover Institution Press, 2013).

On a cool October morning in 1964, Herbert Hoover died in New York City at the age of ninety. He had lived a phenomenally productive life, including more than half a century in one form or another of public service. It was a record that in sheer scope and duration may be without parallel in American history.

His life had begun in humble circumstances in 1874 in a little Iowa farming community as the son of the village blacksmith. Orphaned before he was ten, he managed to enter Stanford University when it opened its doors in 1891. Four years later he graduated with a degree in geology and a determination to become a mining engineer.

From then on, Hoover’s rise in the world was meteoric. By 1914, at the age of forty, he was an internationally acclaimed and extraordinarily successful mining engineer who had traveled around the world five times and had business interests on every continent except Antarctica.

During World War I, Hoover, residing in London, rose to prominence as the founder and director of the Commission for Relief in Belgium, an institution that provided desperately needed food supplies to more than nine million Belgian and French citizens trapped between the German army of occupation and the British naval blockade. His emergency relief mission in 1914 quickly evolved into a gigantic humanitarian enterprise without precedent in world history. By 1917 he was an international hero, the embodiment of a new force in global politics: American benevolence.

When America declared war on Germany in 1917, Hoover returned home and became head of the United States Food Administration, a specially created wartime agency of the federal government. At the conflict’s victorious close in 1918, President Woodrow Wilson dispatched him to Europe to organize food distribution to a continent careening toward disaster. There, for ten grueling months, he directed American- led efforts to combat famine and disease, establish stable postwar economies, and in the process check the advance of Bolshevik revolution from the East.

A little later, between 1921 and 1923, Hoover’s American Relief Administration administered a massive emergency relief operation in the interior of Soviet Russia, where a catastrophic famine -- Europe’s worst since the Middle Ages -- had broken out. At its peak of operations, his organization fed upward of ten million Russian citizens a day.

All in all, between 1914 and 1923 the American-born engineer-turned-humanitarian directed, financed, or assisted a multitude of international relief endeavors without parallel in the history of mankind. It was later said of him that he was responsible for saving more lives than any other person in history.

During the Roaring Twenties Hoover ascended still higher on the ladder of public esteem. As secretary of commerce under Presidents Warren Harding and Calvin Coolidge, he became one of the three or four most influential men in the U.S. government. In 1928, the “master of emergencies” (as admirers called him) was elected president of the United States in a landslide -- without ever having held an elective public office.

Then came the crash of 1929 and the most severe economic trauma this nation has ever experienced. During his tormented presidency, Hoover strained without stint to return his country to prosperity while safeguarding its political moorings. His labors -- even now misunderstood -- seemed unavailing, and in the election of 1932 his fellow citizens’ verdict was harsh.

Before his single term as chief executive, Hoover’s career trajectory had curved unbrokenly upward. Now it headed pitifully down. “Democracy is not a polite employer,” he later wrote of his defeat at the polls. On March 4, 1933, he left office a virtual pariah, maligned and hated like no other American in his lifetime.

And then, astonishingly, like a phoenix, he slowly rose from the ashes of his political immolation. Now came the final phase of Hoover’s career: his remarkable ex-presidency. For the next thirty-one and one-half years, in fair political weather and foul, the former chief executive became, in his self-image, a crusader -- a tireless and very visible castigator of the dominant political trends of his day. He behaved as a committed ideological warrior more persistently and more fervently than any other former president in our history.

Why? Most of all, it was because Hoover perceived in the New Deal of Franklin Roosevelt not a moderate and pragmatic response to economic distress but something more sinister: a revolutionary transformation in America’s political economy and constitutional order. Having espied the unpalatable future, Hoover could not bring himself to acquiesce.

It is this eventful period in Hoover’s career -- and, more specifically, his life as a political pugilist from 1933 to 1955 -- that is the main subject of the volume before you. The Crusade Years is a previously unknown memoir that Hoover composed and revised during the 1940s and 1950s -- and then, surprisingly, set aside. Placed in storage by his heirs aft er his death, the manuscript (in its various versions) lay sequestered -- its existence unsuspected by scholars -- until 2009, when it was discovered among the files of another hitherto inaccessible Hoover manuscript being readied for posthumous publication.

This other tome, known informally as the Magnum Opus, addressed American foreign policy in the 1930s and 1940s. Part memoir, part diplomatic history, part polemic, it was a scathing indictment of what Hoover termed Franklin Roosevelt’s “lost statesmanship” during World War II. Hoover ultimately titled the book Freedom Betrayed. It was published in 2011 by the Hoover Institution Press.

The Crusade Years -- a companion volume of sorts to the Magnum Opus -- covers much the same time period on the American home front. More fully a memoir than Freedom Betrayed, it recounts Hoover’s family life aft er March 4, 1933, his myriad philanthropic interests, and, most of all, his unrelenting “crusade against collectivism” in American life. Rescued from obscurity, this nearly forgotten manuscript is published here -- and its contents made available to scholars -- for the first time.