Why Are We Still in Afghanistan?

Stanley Kutler is the author The Wars of Watergate (Norton), Abuse of Power: The New Nixon Tapes (Free Press), The American Inquisition: Cold War Political Trials (Hill & Wang), numerous other books and articles, and with Harry Shearer the forthcoming television series, “Nixon’s the One.” 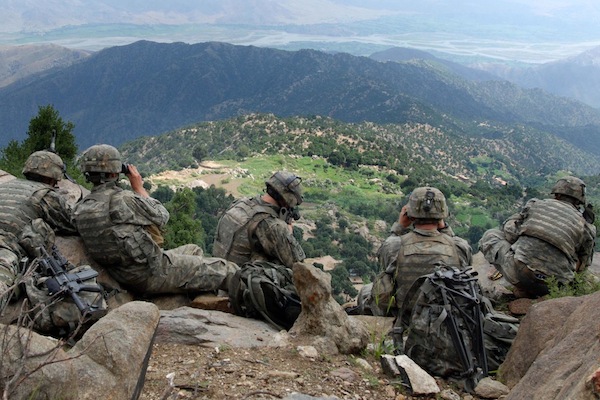 Fifty years not-so-long ago, under the umbrella of the Cold War, we were embroiled in the quicksand—“quagmire” was the term of choice—of Vietnam. By 1965, with upward of half a million troops “in-country,” skeptics and critics began to seriously question the war. The U.S. government, however, countered with the “domino theory,” contending that unless stopped in Vietnam, hordes of Chinese-led communists would overrun Southeast Asia, leapfrog to Japan, the Philippines, and eventually Hawaii and the beaches of La Jolla. But no dominoes fell.

The government’s response nevertheless proved effective, and such arguments are used today, foisted on a passive, apathetic public, and serviced by a compliant media. The rationale is as bankrupt as 50 years ago.

Historical analogies are treacherous, yet the past can inform subsequent events. In Vietnam, we had Nguyen Ngo Diem—“the George Washington of Southeast Asia”—and his family as our allies, but more often than not resistant to our will. Afghanistan’s Hamid Karzai, for peculiar reasons of his own, likes to appear as an ingrate, adept at ignoring our advice, and undoubtedly corrupt. Most of all, both interventions have had little to do with our national interests.

At the end of the Vietnam adventure, we tried briefly to exact some meaning, some lessons in the hope that we would not repeat the same mistakes. First and foremost, we had to understand and accept the limits of American power. In vain. Vietnam has been ignored other than with public displays for recognition of veterans and of those permanently impaired by the war. The Vietnam Wall signifies our human sacrifices, not the loss of national sensibility. A sizable number of veterans not surprisingly recall battles as glorious adventures; indeed, to question the war or suggest that we lost in terms of stated goals is to verge on the unpatriotic.

Presidents and policymakers, our military, our advocates of a “long war” and Congress have persuaded the nation to support and/or ignore our presence in Afghanistan. Our empire now has traveled the well-worn, blowback-laden road once trod by Alexander the Great, the British Empire and, in our own time, Soviet Russia. History can be a way of learning, as William Appleman Williams once wrote; what we learn most about history is to forget it.

In a New York Times op-ed column last month, Gen. John R. Allen and Brookings Institution Director of Research Michael E. O’Hanlon unequivocally advocate our continued presence in Afghanistan. Allen is the former NATO and American forces commander in Afghanistan—a coalition of some 50 nations, the authors tell us in apparent seriousness, a measure as laughable as the “Coalition of the Willing” during the Iraq War, and the now-misleading official title, “NATO-led International Security Assistance Force.” O’Hanlon uncompromisingly supported the Iraq intervention, long after the ostensible reason for the war had been exposed as a fraud.

The authors steadfastly defend the Afghanistan adventure and call for a continued American presence. They conclude that the United States can ride out its current difficulties with Karzai’s pique “because of enduring American strategic interests . . . as well as our huge sacrifice. . . .” The current fight, they say, is not about Karzai, but rather “the American and Afghan peoples.”

Allen and O’Hanlon use the language of our warrior class, which too often has led us astray. They refuse to acknowledge any limitations of American power; they are part of a larger group that has failed to recognize this fact for the past half-century. Merely to invoke “enduring strategic interests” only raises the question—what interests? And our “huge sacrifice” is a reason? That is like the gambler who after unsustainable losses continues to play. They typically maintain that the American “combat mission” will expire in another year, but “Afghanistan’s future” requires that we maintain a presence. As if our fully armed “trainers” will not be involved in “combat.”

We must “keep a vigilant eye” on the extremist groups in northwest Pakistan, Allen and O’Hanlon write. If this is in fact the American security interest, then why are we not more involved in Yemen -- which, after all, has extremist groups? Or Dagestan, that part of the Russian Federation that supplied the Boston Marathon bombers? Or Chechnya, which has a large number of “extremist groups”? Just ask Vladimir Putin.

We can ill afford the casualties and treasure resulting from mistakes based on the premise of John F. Kennedy’s inaugural address, that “we shall pay any price, bear any burden, meet any hardship, support any friend, oppose any foe, in order to assure the survival and the success of liberty.” But instead of high-flown rhetoric, our political figures seem unable to utter the truth of our limitations. Would that Obama repeat in 2008 what he said in 2002: He did not oppose war, only “dumb” ones? Our diminished capacities and resources make such endeavors problematic. Then, too, we might do something other than ignore present realities and forget the past.

We particularly have looked to presidents in the post-1945 world to guide us to a recognition of our national interests. But with Obama, it seems we are on a fruitless, barren quest. In 2008, candidate Obama opposed the Iraq War. Why is difficult to determine, other than the war had been initiated by a Republican president and no longer was popular -- indeed, it belonged to Obama’s category of dumb wars. But Afghanistan clearly was another matter. Then he promised to pursue Osama bin Laden to the ends of Tora Bora. As it happens, in May 2011 we announced we had captured and killed him -- not in the wilds of Afghanistan, but in Pakistan, our steadfast ally. Still we remain in Afghanistan.

Obama’s 2008 campaign advisers Susan Rice and Samantha Power persuaded him to expand the war in Afghanistan. After all, it was smart domestic and campaign politics, for Obama could demonstrate that Democrats could also play the national security card.

President Obama is now captive to Karzai and the American military, and he is saddled with an increasingly unpopular, intractable war. To reverse that course, he undoubtedly would clash with American military leaders. When he had the opportunity, and when it was right to begin our disengagement, the president instead raised our stake, fearful both of letting Karzai fail and of rejecting the adventurism of his military people.

For weeks now, Karzai has been in the “final” stages of negotiating a proposed Status of Forces Agreement to cover the retention of American troops in Afghanistan -- until when remains indeterminate. Along the way, he demanded an “apology” from Obama for invading and destroying the houses of Afghan citizens. Some gall. Sadly, the Obama administration in no way publicly rebuked him, allowing his outrageous remark to stand.

In the latest iteration of the agreement, Karzai apparently received what he wanted, perhaps only for his internal cover purposes. He posted on his website a letter from Obama stating, “U.S. forces shall not enter Afghan homes for the purposes of military operations, except under extraordinary circumstances involving urgent risk to life and limb of U.S. nationals.” In these times, we have come to know the plasticity of “extraordinary circumstances.”

Karzai continues to string out his own comic opera, alternating between acceptance of the agreement and promises to defer it. Obama’s choice is clear: He can continue to tolerate Karzai’s childlike petulance, or he can reprise his Iraq maneuver in which our clients there balked at granting extraterritorial rights for American military personnel and Obama promptly withdrew our troops. Iraq was already racked by civil unrest, and this time Obama wisely decided to avoid the “harm’s way.” Ironically, Iraq Foreign Minister Hoshiyar Zebari now has urged Karzai to accept the agreement.

The proposed Status of Forces Agreement is beside the point. So cui bono, who benefits from another decade of commitment in Afghanistan and even “beyond,” as the agreement’s American drafters have said? Where is the threat to American national security and national interest that we must stay in Afghanistan? Will the Russians return for another try; is there some sinister Chinese design out there? Admittedly, the Taliban certainly are an affront to modern civilization, but that is no excuse for us to almost single-handedly try to change their behavior. Obama and his advisers have the primary task to define and assert the American national interest. Afghanistan is not the place. What have we gained after more than twelve years?

The usually decisive will of the American military believes otherwise. Gen. Allen has praised the prospects for more involvement. The forthcoming agreement, he said, “acknowledges that we as a people and the Afghan people are bound together in a common future.” Is this some new definition of globalism?

So, here we are more than five years after Obama declared Afghanistan a proper place to assert American power, stuck in the quagmire, with little prospect of extricating ourselves and making progress only because we declare it so. Meanwhile, we still have Karzai, and the president’s advisers remain in place, unlikely to change their minds.