Robert E. Wright is the Nef Family Chair of Political Economy at Augustana College in Sioux Falls, South Dakota and the author of fifteen books, including Corporation Nation,  from the University of Pennsylvania Press. 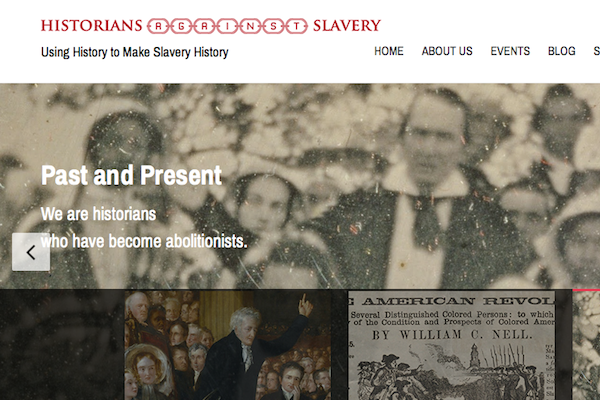 This article’s title is a double entendre that refers to the past as among the quick (living as an adjective, as in ‘history coming alive’) and to personally influencing historic events (living as a verb, similar to ‘making history’). Some scholars aspire to create “living history” not only by making the past interesting and relevant (i.e., alive) for students and readers but also by leveraging it to sway the decisions of business, cultural, and political leaders. “Using History to Make Slavery History,” the motto of Historians Against Slavery (HAS), evokes both meanings of “living history” by asserting that studying the past is useful and thus alive and that history can be transformative and hence important, even historic.

Non-historians, typically economists and sociologists but members of other academic tribes as well, sometimes try to use the past to influence policy debates. In Last Exit: Privatization and Deregulation of the U.S. Transportation System (2010), for example, economist Clifford Winston pointed to America’s early transportation system, which was dominated by private companies, to bolster his view that the government today should privatize much of the nation’s transportation infrastructure. Sociologist Joseph Blasi and economists Douglas Kruse and Richard Freeman argue in The Citizen’s Share: Putting Ownership Back into Democracy (2013) that the Founders would support their notion that the government ought to encourage ownership of corporate shares by as broad a group of Americans as possible. Scores of other examples published in the last decade or so also could be adduced. Such efforts range in quality from naïve to top notch but cluster toward the middle of the range.

That judgment is not meant to disparage non-historian scholars but to point out that doing history well is difficult and time-consuming and that historians have an absolute advantage over other scholars when it comes to context and change over time.

Despite their inherent advantages in creating “living history,” professional historians rarely try to influence policies or otherwise make their work directly useful outside the academy. Many apparently believe that to “use” history is inevitably to “abuse” it, to surrender to “presentism,” even though historians now widely believe that nobody can be completely “objective,” that the Zeitgeist and personal factors infect all historical inquiries. In other words, historians now concede that they “twist” or “distort” their narratives and analyses to some degree, if only unconsciously, but many seem to hold that the degree of distortion increases to unacceptable levels if an historian has an “ax to grind” or some other explicit agenda, however well-intentioned that agenda might be.

Historians holding such views apparently worry that the authors of living history will raid the archives in search of artifacts that meet their preconceived notions and ignore (or worse destroy) countervailing evidence. While that certainly has happened (recall the firestorm set off by historian Michael Bellesiles’s 2000 book Arming America: The Origins of a National Gun Culture), historians have raided archives to win acceptance for, or protect, their pet theories about topic C, in nation or region B, in period A. In fact, standard academic history, with no palpable connection to current concerns, is more susceptible to unprofessional historical practices than living history is because it is never tested by the real world or non-historian scholars the way that living history is.

Perhaps the root cause of most historians’ disdain for living history is that it has to work in the real world and not just receive the approbation of a few like-minded colleagues. To do living history is to risk failure and to create an ultimate arbiter outside of the realm of professional history.

Consider, for example, Corporation Nation, published by the University of Pennsylvania Press in December 2013. Release of my fifteenth book hardly seems sufficient cause for trepidation but this one is different because my goal in it is to make corporate executives more accountable to corporate stakeholders (especially employees, shareholders, and taxpayers), not to win praise from historians, though that would certainly be welcomed too. I want the book to sell well not so I can make a few bucks and brag about its success but so it has a chance to impact the world in a significant and positive way. Based on over 20,000 corporate charters and thousands of other documents related to the governance of business corporations in the United States before the Civil War, the book is a serious work of scholarship on a topic of crucial importance to America’s future economic success (alas, the publisher cut the subtitle, Rise and Demise of the American Economic Juggernaut).

Rather than raiding the archives to bolster my pre-conceived notions about the principles of corporate governance (of which I assuredly had none), the book’s thesis, that policymakers should re-institute key checks and balances that long prevented corporate executives from expropriating resources from stakeholders, emerged out of my simultaneous reading of early corporate charters and current debates about corporate governance stemming from the Enron scandal and the panic of 2008 that culminated, respectively, in the passage of Sarbanes-Oxley (2002) and Dodd-Frank (2010). Rather than merely justifying a policy position I previously held, historical inquiry led me to the position by immersing me in previous policies, their rationales, and their outcomes.

Of course some historians have woven historical scholarship and present concerns together more skillfully than I could ever hope to do. John Hope Franklin, J. Wayne Flint, Kenneth Stampp, and Benjamin Quarles come immediately to mind. So, too, does James Brewer Stewart, the founder of HAS, an organization committed to creating quality living histories that can help to reduce the number of people enslaved (worked against their will, largely for the benefit of another) throughout the world today, the best estimates of which are in the range of 30 million. The organization began in 2010 when Stewart traveled extensively to speak about slavery and abolition, past and present, on college campuses and at conferences and other meetings. Today, the HAS speakers bureau, which is similar in organization to the OAH Distinguished Lecturers program, aims to link the history of slavery and abolition to contemporary abolitionist struggles for a wide variety of audiences.

Through its speakers bureau, its website, conferences (the second of which will be held September 24-27, 2015, in Cincinnati), and its new book series with Cambridge University Press (“Slavery Since Emancipation,” of which I am the general editor), HAS aims to change the world for the better through excellent historical scholarship that explicitly links past to present and the concerns of academic historians to those of anti-slavery activists. The only agenda is to help those who need it most, those forced to toil against their will in the sex trade, diamond mines, fishing boats, and other modern slave pens.

When historians study why slaves did not flee or rebel more often, HAS wants them to think about the “invisible chains” used to shackle the minds of modern slaves and to suggest ways to unshackle them based on historical precedents. When they investigate slave trade interdiction strategies, HAS wants them to ask how particular successes or failures might influence interdiction efforts today. When they study abolitionist rhetoric, HAS wants them to think about the implications for modern anti-slavery NGO advertising. It also wants historians studying post-Emancipation forms of coerced labor to pay attention to the who and when but also to the how and why and to think about what that may tell us about the causes of labor bondage today.

HAS is not calling for historians to drop everything and start producing manuals for activists. Rather, it is calling for historians to be aware of where their research has valid, real-world implications and broadcast it. Yes, times have changed and solutions to problems in the seventeenth century may not be widely applicable today. But they might be, or they might help to spark a hybrid solution combining old and new practices, or they might help to advance formal models by exposing new variables or suggesting new parameters. Better to suffer the momentary indignity of having a suggestion shot down than to remain silent and leave people who could have been helped unaided. World-changing ideas lurk in the archives and who better to uncover them, and place them in their proper context, than professional historians?