Ellen D. Wu is assistant professor of history at Indiana University Bloomington. She is the author of The Color of Success: Asian Americans and the Origins of the Model Minority (Princeton University Press, 2014). Follow her on Twitter @ellendwu. 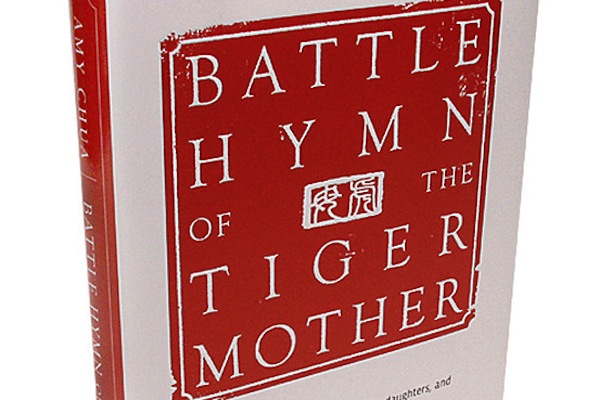 The New York Post’s recent preview of Amy Chua’s forthcoming book, The Triple Package (co-authored with husband Jed Rubenfeld), triggered an avalanche of outrage. Asian Americans blasted her as a “sociopath” and “racist as hell” for yet again trafficking the “model minority” stereotype: that Americans with roots across the Pacific are culturally wired to succeed academically and socio-economically.

A number fought back under the Twitter hashtag #NotYourAsianTigerMom with real-life examples drawn from their own families. (The Twitter hashtag was coined by Suey Park in honor of her mother’s birthday. Park is also the inventor of the #NotYourAsianSidekick hashtag -- a conversation about Asian American feminism -- that went viral in December.)

As a kid w/ a disability, Mom was never embarrassed to take me out, despite comments from their friends. #NotYourAsianTigerMom

At the same, the conversation functioned as a guerilla education campaign.

> love and support them? Are #Asian parents not people? Do they love their kids less/differently bc of their #race? #NotYourAsianTigerMom

Whether our parents were strict or not has nothing to do with race. There are demanding parents everywhere. #NotYourAsianTigerMom

While the platform was very 21st century, the fury within progressive Asian American circles about the model minority image dates back to the post-World War II era. What is at stake in this decades-old about self-representation debate is no less than the collective social standing of life chances not only of Asian Americans, but also of African Americans and other marginalized groups. Chua’s unapologetic take elicits such discomfort because she is a Chinese American who chooses to reproduce anti-Asian as well as anti-black racism.

This complicity has a long, if underacknowledged, history. From the mid-nineteenth century through the 1940s, Americans demonized Asian migrants and their children as the “yellow peril.” Whites subjected “Orientals” to a host of exclusions from mainline society, including barriers to citizenship naturalization and the franchise, residential and school segregation, anti-miscegenation laws, and relegation to low-status occupations. Asian Americans tried mightily to reverse their degradation by claiming cultural compatibility with middle-class Anglo Saxon Protestants. But they were unsuccessful until World War II.

Asian Americans’ fortunes changed when the United States took up arms against the Axis powers. As the nation fought against Nazis and fascists -- and, soon thereafter, the Communist Soviets -- in the name of democracy, Jim Crow and its correlate racial regimes became a liability. The United States could not claim to be the leader of the free world without attending to its race problems at home. So liberals had a strong incentive and convincing reason to dismantle the laws and practices of Asian Exclusion. The nation’s global ambitions, in other words, provided an opportunity for despised “aliens” to become accepted Americans.

The trajectory of Japanese America is especially illustrative. The federal government’s incarceration of some 120,000 persons of Japanese ancestry as an (unproven) fifth column for Japan during World War II was the very nadir of Exclusion. In authorizing, executing, and defending the constitutionality of mass imprisonment, the state effectively classified each and every ethnic Japanese in the United States as “enemy aliens.”

Yet liberals -- including the government officials who ran the internment camps -- saw in the war opportunity and a necessity to assimilate Japanese Americans into the mainstream. Military service, especially, seemed to authorities a foolproof way for internees to prove their unswerving loyalty to the nation -- not to mention a visible means for the counter Japanese propaganda that the United States was fighting a “race war.” Certain Japanese American spokespersons pushed strongly for enlistment, especially the Nisei (second-generation immigrant Japanese) leaders of the Japanese American Citizens League (JACL). And despite vocal protests from within the camps -- including bitter denunciations of the proposed “Jap Crow” (segregated) regiments -- the Army went ahead as planned.

The scheme was stunningly effective. “GI Joe Nisei” became the face of an extensive and persuasive public relations campaign conducted in tandem by the state and JACL. Countless media outlets circulated stories of heroic Japanese Americans on the battlefield. Reader’s Digest, for one, applauded the myriad ways in which Nisei soldiers fought not only to win the way but also “to prove that Japanese-Americans were basically no different in attitude or loyalty from American citizens whose forebears came from other lands.”

In the postwar period JACL heads continued extolling the Japanese American troops in order for two purposes. First, they wished to redeem their damaged reputation within the ethnic community for their controversial support for drafting Nisei. Second, they hoped to convince lawmakers to undo the remaining pillars of Exclusion by lobbying for Japanese American inclusion as the reward for the Niseis’ undeniable sacrifices.

The pinnacle of their PR efforts was Go For Broke! (1951), the Metro-Goldwyn-Mayer feature film that chronicled the valor of the famed 442nd all-Nisei battalion on the European front. (JACL officer Mike Masaoka served as “special consultant” during production.) The moral of the tale was that Japanese Americans had proved beyond a doubt their Americanism through their “baptism of blood.” The movie opened with great fanfare in Washington DC, Honolulu, Los Angeles, and Tokyo. Cincinnati even declared a “Go For Broke” week honoring the city’s Nisei veterans in May. The following year, Congress passed the McCarran-Walter Act, finally allowing ethnic Japanese to become naturalized citizens and the resumption of immigration of Japan.

JACL’s Nisei soldier campaign had many detractors. During the war, draft resisters had refused to serve and those known as renunciants had renounced their US citizenship. In the years after the conflict, some Japanese Americans continued to denounce the league for promoting what they saw as a highly problematic representation of their community. George Yamada, a World War II conscientious objector, penned a scathing critique of Go For Broke! in the NAACP journal Crisis. To Yamada, the film -- and JACL, by association -- was “Uncle Tom” for promoting racial clichés (such as script’s emasculated Japanese American male characters) and for falsely implying that the 442nd was an all-volunteer force. Go For Broke!, in short, did nothing to solve the “critical plight” of peoples of color in the United States.

Faultfinders of JACL as “rabid apologists” could do little to dislodge this now-dominant image. The Nisei soldier had become the basis of a new popular idea of Japanese Americans as politically moderate, patriotic Americans. The relaxation of discrimination, additionally, opened up new avenues of socio-economic mobility for Japanese Americans. JACL leaders, nonetheless, continued to feel insecure about their own standing within the ethnic community. They also worried about Japanese Americans’ stance within nation as a whole, particularly when US-Japan tensions flared up in the late 1950s. At that time, some American businesses called for boycotts of cheap Japanese goods, while many Japanese opposed the unequal terms of US-Japan relations, widely regarded as furthering American Cold War interests at the expense of their own sovereignty.

To address these problems, JACL launched the Japanese American Research Project (JARP) in 1960. The multi-faceted undertaking encompassed the archiving of the community’s documents and artifacts, a social scientific survey of Japanese American experiences, and a popular account of Japanese American history. In order to secure funding and institutional backing for JARP, the league framed the saga of Japanese America as a triumph of democracy in action” speaking to Cold War geopolitical exigencies. Despite “exceptionally strong prejudices, hostility, and cultural differences,” they suggested, Japanese Americans had attained “within a single generation . . . a real measure of ‘Success,’ greater than many Europeans with far fewer handicaps.” The story could help to boost the country’s reputation in Asia and Africa, emphasized the league, by demonstrating the possibilities for racial minorities in the United States. (The arguments worked; the University of California, Los Angeles welcomed JARP to its campus in 1962.)

JACL directors also shrewdly spun the narrative to speak to the increasingly urgent “Negro Problem.” Nowhere was this most apparent than in journalist Bill Hosokawa’s book Nisei: The Quiet Americans(1969), a general history of Japanese America commissioned by the league as part of JARP. Nisei cast Japanese Americans as model minorities, citing famous examples (World Trade Center architect Minoru Yamasaki, Hawai’i Congresswoman Patsy Mink) and asking how such feats of assimilation had been achieved in the face of racial discrimination. “Looking on the extremes of apathy and militancy among Negroes and Hispanos, some Nisei from the comfort of their upper middle class homes have been led to ask: ‘Why can’t they pull themselves up by their own bootstraps the way we did?,’” observed Hosokawa.

Such sentiments infuriated many other Japanese Americans, including some of JACL’s own members. Discontents had petitioned publisher William Morrow and Company to reject the title Nisei: The Quiet Americans, taking issue with it as a “propaganda device to tell Black Americans and Mexican Americans to behave like ‘good little Orientals’ who know their place.”

Yuji Ichioka, the young founder of Berkeley’s radical Asian American Political Alliance, pointed out that the book ignored the “possible psychological damages” of internment and the grind of racism. He further noted that Nisei appeared “ironically, at the very moment when Sansei (third generation Japanese American) activists are asking: what have we been integrating into? Into a nation conducting a politically and morally bankrupt war against Vietnamese people in the name of freedom and democracy? A nation bent upon exterminating militant Black leaders? A nation which is moving to the extreme right in the name of law and order? A nation in which the so-called “American Dream” has turned out to be a violent nightmare?”

Half a century later, many Asian Americans continue pose similar questions that Ichioka and his contemporaries raised. And in this light, we might see something redeeming in Chua’s outrageous theories. The debates that she provokes highlight the very diversity of Asian America that “Tiger Mom” and “Triple Package” explanations obscure. They also provide timely opportunities to remember what hangs in the balance -- not only for Asian Americans but African Americans and other racial minorities too -- when we reproduce the fiction of the model minority.

*A note on citations: The sources for this article are drawn from Wu, The Color of Success. Please refer to the book for the cull citations. Theis essay also includes excerpts of primary sources first cited in Alice Yang Murray’s Historical Memories of the Japanese American Internment and the Struggle for Redress (Stanford, 2007).

This article has been amended.